Built from 1775, for Janet Livingston (1743-1828) and her Irish husband General Richard Montgomery (1738-1775). Grasmere was built for the first high-ranking officer to be killed in the American Revolution. It burned down in 1828 and was rebuilt on the same foundations before being purchased by an intimate friend of the Russian novelist Count Leo Tolstoy. It then came into the hands of the former Duchess of Argyll who in 1954 married a member of the Livingston family, bringing ownership of the house back full circle. Chelsea Clinton held her wedding rehearsal dinner here in 2010, and the current owner intends to transform the historic mansion into a country club and spa with a golf course spread out over the 525-acre estate overlooking the Hudson River....
zoom_in 5 images 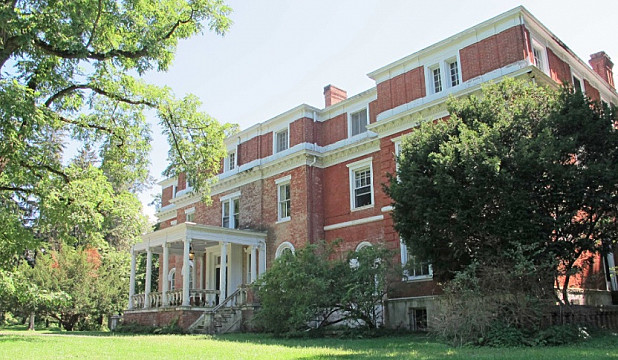 William Duer, of New York; Member of the Continental Congress

Robert's son - Mrs Montgomery's father - Judge Robert Robert Livingston (1718-1775) married Margaret Beekman (1724-1800), the sole heiress of Colonel Henry Beekman (1687-1775), and through that marriage the Livingston family came into the possession of the vast Beekman estates along the east bank of the Hudson River in Dutchess County.

The Livingston children - Mrs Montgomery and her nine surviving siblings - were all given parcels of the Beekman land and they all built homes along the same sixteen mile stretch of the Hudson River, just south of the Livingston family home, Clermont Manor.

Having been passed over for promotion in the British Army, Captain Richard Montgomery sold out for £1,500. Determined to pursue his passion for farming he wrote: "As a man with little money cuts but a bad figure in this country among Peers, Nabobs etc., I have cast my eye on America where my pride and poverty will be much more at their ease".

Montgomery bought a farm north of New York City in 1772, but after his marriage to Janet the following year, "laid out a considerable amount of money in building a dwelling house and mills" on 618-acres of the former Beekman patent gifted to his wife. The bricks were fired from clay taken from a field just south of the house called "Brick Lot".

The mansion was all but complete by the Summer of 1775, but Revolution was declared before Montgomery had a chance to enjoy it. He was appointed Brigadier-General in the Continental Army and when General Schuyler fell ill, he stepped in to lead the American invasion of Canada. That December at Quebec, he was killed and the invasion failed.

Janet never remarried, but she continued to build the estate as they had planned. It was Janet who lined the driveway - scattering the seeds herself - with the locust trees still seen there today, those having been her husband's favorite variety of tree. There was also supposed to be the "Montgomery Willow" planted by the General before he went off to war. Certainly by the 1930s it no longer existed, only a sickly offshoot that was cut down.

Mrs Montgomery remained at the house only for a few more years before building Montgomery Place in 1802 where she would live out the rest of her days. But long  before then, from about 1779, she rented the house to Congressman William Duer (1743-1789) and his wife (who was also a first cousin of Mrs Montgomery's father) Lady Kitty Duer (1755-1826). At this time, the house was known as "Rhinebeck House".

The Livingstons lived there for 25 years, but a fire in 1828 gutted the original house. It is almost a certainty that the walls of the house survived the fire and were incorporated into the rebuild. Certainly, the new brick structure - with five bays laid out in a center hall plan - followed the original configuration of the Montgomery house, standing on the same foundations. It was a single-story structure, as seen in an old photograph circa 1855.

It was Peter Livingston who named the estate "Grasmere" for the village in England's Lake District. His new home that enjoyed a magnificent view over the Hudson River and and Catskill Mountains beyond closely resembled the lake and hills of the English village.

Peter Livingston outlived his wife and died at Grasmere without children in 1847. He left the estate to his brother, Judge Maturin Livingston (1769-1847), but he too died within a matter of months. Grasmere was then left to Maturin's widow, Margaret Lewis (1780-1860), who'd in fact spent her teenage years there when her parents had rented it from Mrs Montgomery before purchasing the Staatsburg Mansion. On her death, she left Grasmere to her son, Lewis Howard Livingston (1814-1886).

In 1861, Lewis Livingston transformed the Federal villa into a Second Empire mansion. He added not just one but two stories to the house, covered it with a mansard roof, and put up a tower on the north east corner. He also acquired a further 280-acres, bringing the estate up to 898-acres. Lewis carried on some business in Rhinebeck, but predominantly farmed quietly on the estate for the remainder of his days, living with his wife, Julia, and their two sons.
Schieffelins, Crosbys & McCabes (1894-1954)

Lewis left the estate to his only surviving son, Lewis Howard Livingston Jr. (1846-1893). An inveterate traveller, he died suddenly at Rome in Italy, leaving Grasmere to his first cousin, Mrs Margaret Lee. She put it up for sale and the following year (1894) it was purchased by Mrs Schieffelin of New York City. There were several other similar houses on the market at that time, but she chose Grasmere for its beautiful mature trees.

The recently widowed Mrs Sarah Minerva Schieffelin (1834-1921) purchased the house for her daughter, Fanny. Fanny's scholastic and yet politically prickly husband, Ernest Howard Crosby (1856-1907), had once again stirred up New York society with his socialist leanings. Mrs Schieffelin hoped that by installing him on a country estate he would keep out of trouble and concentrate on his poetry, saving them further embarrassment.

Crosby had started his professional life with high moral ideals, but rather than becoming a champion for the poor, he became rather self-indulgent and self-serving. He had no interest in the running of Grasmere and cared even less for the needs of the local farmers. It was his wife who ran the farm, and it was her money that maintained them while he whiled away his hours writing in a cabin in the woods.

Mrs Crosby enlarged the house to 33-rooms by adding the west wing, with the hope of one day adding an east wing too. She removed the heavy Second Empire elements by taking down the tower and the mansard roof. She also replaced the wooden front piazza with the marble one seen today. She made one large entrance hall by knocking down the walls between three receptions rooms, and did the same to two more to enlarge the parlor.

When the Crosbys first moved in, the farmer had made use of all available space and there was rye planted right up to the front and back doors! Fanny laid new lawns and added rows of shrubbery, flowerbeds, walkways and balustrades. She built a pair of gatehouses in "Lake District style" and one-by-one replaced the old wooden barns with stone counterparts made from the old walls that had once separated the fields. The main stone barn - still used today - was at the time said to be the largest of its kind in the country.

Fanny left Grasmere to their son, Maunsell Schieffelin Crosby (1887-1931), an avid ornithologist and enthusiastic, if not altogether savvy, farmer. He lived there with his wife, Elizabeth Coolidge (1889-1962) and their daughters. He continued his mother's work growing crops on the farm and running the dairy. He raised Jersey, Brown Swiss and Holstein Friesian cattle, and kept hogs, chickens, turkeys, and ducks. They grew apples, pears, potatoes, beans, and other crops, while continuing to upgrade the outbuildings.

Despite the outward success of the farm, Maunsell Crosby didn't invest in the necessary improvements and when he died there was little money left for his daughter, Helen Elizabeth Crosby (1911-1995). In 1954, the year after she divorced her husband, Lewis McCabe (1906-1990), she had to admit defeat and sold up to a relative, Louise Clews...

Louise and her first husband divorced without children after only three years of marriage. Two years later, in 1935, she took for her second husband the freshly divorced 11th Duke of Argyll who had received his early education at Milton Academy, Massachusetts. The Duke's only child by his “nymphomaniac" first wife became the third of the six wives of the controversial American writer Norman Kingsley Mailer (1923-2007). Louise had two children by the Duke (including the heir to the Dukedom), but in 1951 she divorced him and left Inverary Castle to return to her native America.

In 1954, the same year that she purchased Grasmere, Louise took for her third husband the New York banker Robert Clermont Livingston Timpson (1908-1988) and thus Grasmere came back into the Livingston family. Robert grew up at nearby Maizefield and on his mother's side he was a grandson of John Henry Livingston, of Clermont Manor. The Timpsons carried out various renovations, most notably to the library where their initials can be seen on either side of the main fireplace.

Mrs Timpson once told that she frequently (and clearly quite fearlessly!) came across a ghost in the house. In describing it and where she had these encounters, local historian DeWitt Gurnell surmised that the specter was Lewis Howard Livingston (1814-1886) making himself known again. As proof of further evidence, it later came about that some twenty years before Mrs Timpson had talked of her experiences, Maunsell Schieffelin Crosby (1887-1931) had also reported exactly the same ghostly encounter.

The Timpsons divorced in 1963, but Louise remained at Grasmere. Five years later she admitted during an interview with The New York Times that she was, "not rich enough to live here with a big staff,” but added that she'd rather "live in the attic" than sell the house. To cover costs, she took in boarders and one summer gave tours of the house that only succeeded in generating a mere $150. On a cold mid-winter's night in 1970, Louise went to bed in her beloved Grasmere and never woke up.

Grasmere into the 21st Century

The house now stood on just 25 acres and was put on the market for $175,000. In 1972, it attracted four families from Westchester and Delaware: the Cantors, Spectors, Rells and Scheins. They bought it together for use as a vacation and potential retirement home, encouraging a communal, leaderless atmosphere when it came to the running of the house. In 1987, Grasmere was placed on the National Register of Historic Places.

In the meantime, Steve Mensch, an architect from New York, had quietly been buying up land totalling 500-acres that had originally belonged to the estate, including the old stone barn. In 2006, he purchased Grasmere and he and his son had the intention to convert the old mansion into a 12-bed country club hotel with guest cottages, spa, golf course and a restaurant in the old barn serving locally sourced products.

Grasmere remains unconverted, but the old barn is available to hire for events. In 2010, Chelsea Clinton held her rehearsal dinner here on the eve  of her wedding that was held at nearby Astor Courts.