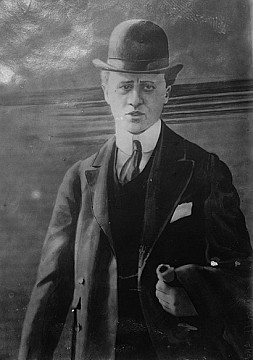 He was born in the same year and looked remarkably similar to his first cousin, Robert Walton Goelet (1880-1941). To distinguish between them, he was known as "Bobby" and his cousin was known as "Bertie". They both graduated from Harvard in 1902. Bobby had just one sibling, May, who became the Duchess of Roxburghe and left America for Scotland. Having inherited the bulk of his father's $80 million fortune in 1897, aside from managing their vast real estate interests Bobby was also a director of the Chemical Bank and the New York Trust Company. As a wedding gift for his first wife, Marie, his mother gave the young couple Ochre Court in Newport. Six years later, she divorced him and relocated to the French Riviera where she lived an eccentric, flamboyant lifestyle with the artist Henry Clews Jr. Bobby met his second wife, Fernanda, in Paris - whose story is told in the history of Ochre Court. After several scandals and having been rejected by American society, he took his second wife back to Paris but they divorced soon afterwards. His third wife, Roberta, was a Newporter, and after renting Quatrel they downsized to Champ Soleil he finally found happiness between there and Glenmere, New York. He had five children, having at least one with each of his three wives.