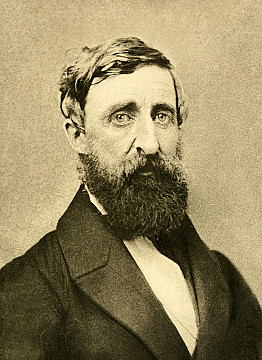 He was born at the Thoreau Farm near Concord, Massachusetts, and educated at Harvard University. Returning home, he met Ralph Waldo Emerson who introduced him to his intellectual circle and in his early years he became a Transcendentalist, a philosophical movement led by Emerson. Thoreau divided his time working for his father's pencil factory and writing as a philosopher of nature in relation to the human condition. From 1841 to 1844, he lived at the Emerson House in Concord. He was tutor to Emerson's children and, "an indefatigable and very skillful laborer". In 1845, he built a log cabin on the Emerson property at Walden Pond where he lived for the next two years and wrote his most famous work: "Walden; or, Life in the Woods," which he eventually published in 1854. Today, it is viewed as an American classic, exploring natural simplicity, harmony, and beauty as models for just social and cultural conditions.

In 1850, he moved into the Yellow House with his family and became a civil engineer. He continued to write and gave lectures on philosophy, botany, natural history, his travels through Canada East and New England, but perhaps most importantly, civil disobedience which led to some branding him an anarchist. He was an outspoken supporter of the abolitionist movement and it was his strong defence of the actions of John Brown at Harper's Ferry in 1859 that gave Brown's actions a voice. In David Reynolds' biography of Brown he stated: "If, as Alfred Kazin suggests, without John Brown there would have been no Civil War, we would add that without the Concord Transcendentalists, John Brown would have had little cultural impact". Thoreau's health had long been fragile and he died unmarried at the early age of 44. His writings had little impact in his own lifetime but have gone on to influence virtually all of the greatest civil rights leaders in modern times.

Walden: Life In The Woods By Henry David Thoreau

Thoreau and the Language of Trees By Richard Higgins