Built in 1828 as a summer home for the young newly-weds Charles Coolidge (1806-1877) and Louisa Ann Noble Dillingham (1806-1866), it is better associated with Ralph Waldo Emerson (1803-1882), "The Sage of Concord," who lived here for just short of 50-years. Emerson's great friend Henry David Thoreau (1817-1862) lived here in the 1840s and it was on the Emerson property at Walden Pond that he built his log cabin where he lived for two years while writing the American classic, "Walden; or, Life in the Woods". Emerson once said: "the ornament of a house is the friends who frequent it"....
zoom_in 5 images 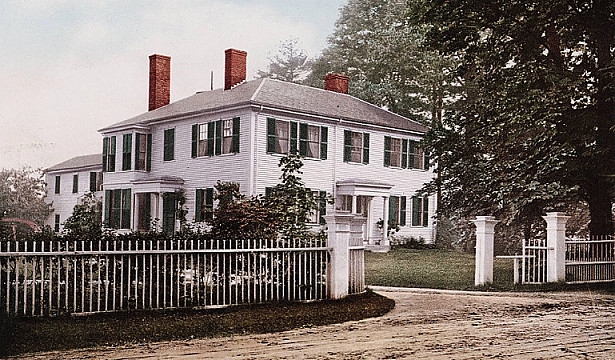 Ralph Waldo Emerson was a philosopher, poet, and essayist perhaps best remembered as the leader of the Transcendentalist Movement that regarded society and institutions to have corrupted the purity, individuality, and inherent goodness of people and nature. In his time, Emerson was the leading voice of intellectual culture in the United States and he is still regarded as one of the country's most Liberal Democratic thinkers.

Emerson returned to the States from a tour of Europe in 1833 and at the end of the following year he moved to Concord where his great-grandfather, the Rev. Daniel Bliss, had first come in 1738 as Pastor to the Congregational Church. Ralph moved in with other members of his family to the Old Manse, built by his grandfather, the Rev. William Emerson, in 1770. In August, 1835, he bought this house and 2-acres from the Coolidges for $3,500. Originally called "Coolidge Castle," Emerson renamed it, "Bush". He moved in with his new wife, Lydian, and his mother, Ruth, who'd also been living at the Manse.

The Coolidges were one of Boston's best known families and Charles was a first cousin of Joseph Coolidge IV who was married to Ellen, grand-daughter of Thomas Jefferson, 3rd President of the United States. Charles grew up on Boston's Bowdoin Square where his grandfather had built the beautiful Coolidge Mansion that was heavily influenced by the Bingham Mansion in Philadelphia. Just as Bowdoin Square was shaded by horse-chestnut trees, Charles planted a row of the same trees along his newly acquired lot in Concord. The house was very well-constructed and Emerson also noted that Coolidge had, "built the only good cellar that had then been built in Concord". The only negative to the house was that a neighbor had put up an irregular, poorly built barn directly to the side of it, so that Emerson felt compelled to buy the barn too, to make it less of an eyesore.

During his lifetime, Emerson enlarged both the house and the barn, and he increased the acreage from two to fourteen, which included land up by Walden Pond. He created an orchard by planting nearly 100 apple and pear trees near the small brook at the foot of his property, and he also built a summer house on the lawn closer to the main house.

The library where Emerson worked is found immediately to the right of the door by which the house is entered. A contemporary account described it as, "a simple, square room, not walled with books like the den of a literary grub, not merely elegant like the ornamental retreat of a dilettante. The books are arranged upon plain shelves, not in architectural bookcases, and the room is hung with a few choice engravings of the greatest men. There was a fair copy of Michaelangelo's 'Fates'... it is the study of a scholar".

It was in this house in 1836 that Emerson held the first meeting of what would become the Transcendentalist Club. Prominent among its members was Henry David Thoreau, Emerson's closest friend, who he invited to live with his family at Bush between 1841 and 1844. Thoreau paid his board by acting as a tutor to the Emerson children and, being "an indefatigable and very skillful laborer," carrying out various repairs around the property. In 1845, Thoreau built a log cabin on the Emerson property at Walden Pond where he lived for two years and wrote his most famous work: "Walden; or, Life in the Woods".

In the summer of 1872, a fire broke out on the top floor. Their friends raised more then $12,000 for the repairs which also included sending the Emersons to Europe and Egypt while the works took place. Lydian survived Ralph by ten years, and after she died in 1892 the house was occupied by their unmarried daughter, Ellen, who had been named for Ralph's first wife at Lydian's suggestion. Ellen took up residence until her death in 1909 when her brother, Edward, moved in and lived here with his wife until 1930.
The House Museum Today

After Edward's death it was acquired by the Ralph Waldo Emerson Memorial Association which continues to maintain the house as a museum. The interior remains almost exactly as it was in Emerson's time, except for his study which is now in the Concord Museum across the road. The Meadow Walk in the gardens retraces Emerson's steps to Mill Brook.

The Concord Quartet: Alcott, Emerson, Hawthorne, Thoreau and the Friendship That Freed the American Mind By Samuel A. Schreiner Jr.