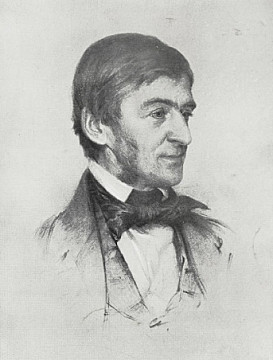 Born in Boston, Massachusetts, he was educated at the Boston Latin School and Harvard College. He taught at Cambridge before becoming ordained (1829) in Boston. After his beloved first wife, Ellen, died in 1831 he began to question the church. He resigned in 1832 and took a tour of Europe the following year. Among others, he spent time with the philosophers John Stuart Mill and Thomas Carlyle (with whom he corresponded until his death), and the poets Wordsworth and Coleridge. On returning to the States, he began his career as a lecturer and essayist. In 1834, he moved to Concord, living with his step-grandfather at the Old Manse before buying the Emerson House in 1835 where he would live until his death just short of 50-years later. In 1836, he hosted the first meeting of the Transcendental Club, a philosophical movement influenced by Kant and Hinduism among others, whose fundamental belief is that society and institutions have corrupted the purity, individuality, and inherent goodness of people and nature.

Emerson delivered over 1,500 lectures in his lifetime, touring New England, Britain, and Paris during the Revolution of 1848. He was a staunch opponent of slavery and voted for Abraham Lincoln but was disappointed that the President seemed more concerned about preserving the Union than eliminating slavery once and for all. In his personal life, Emerson counted Henry David Thoreau and Nathaniel Hawthorne as his closest friends. He was married twice and had four children, all by his second wife 'Lydian'. He was the godfather of William James, the "Father of American Psychology" and brother of the celebrated novelist Henry James. Emerson was the leading voice of intellectual culture in his era in the U.S. and is still regarded as one of its most Liberal Democratic thinkers.

Self Reliance By Ralph Waldo Emerson

The Transcendentalists and Their World By Robert A. Gross