Completed in 1799, for William Cooper (1754-1809), the founder of Cooperstown, and his wife Elizabeth Fenimore (1754-1817). Their son, James Fenimore Cooper (1789-1851), was the author of The Last of the Mohicans (1826), but he also transformed his parents' Federal mansion into one of America's earliest Gothic-Revival masterpieces complete with battlements, mullioned windows and turrets, predating the likes of Lyndhurst by a decade. Having returned to New York from an extensive trip of Europe in 1834, he was influenced by Westminster Abbey and Abbotsford. It was a great loss to American architecture when it burned to the ground two years after James' death...
zoom_in 8 images 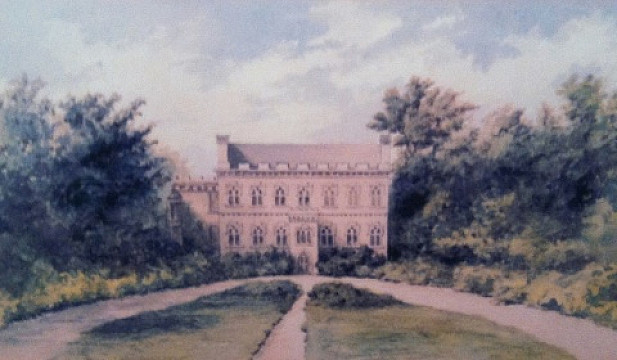 James Fenimore Cooper, Author of "The Last of the Mohicans" etc.

In 1786, funded by his success as a merchant, William Cooper bought 67,000-acres of land in central New York that would constitute Otsego County. By 1790, he had chosen the site on which he would lay out the county capital, Cooperstown, and removed his family there from New Jersey accompanied by a retinue of 8-servants. The Coopers first lived in an imposing timber house that William named the Manor House, but in 1796 he started work on a brick home more befitting that of a squire of his status.

Cooper's new manor house, modelled after the Van Rensselaer Manor House at Albany, was completed in the symmetrical Federal-style on a center-hall plan in 1799. William named it "Otsego Hall" for the county which took its name from the lake over which the house looked. The mansion of 75-by-50 feet sat on 3-acres of land, far back from the road, surrounded by attractive gardens and a picket fence. It was the first brick building in the county and "the largest private residence west of Albany".

It was a two-story (over a basement) brick house painted red with white mortar lines., and chimneys either side of the pitched red shingle roof. The front door was covered by a porch and four wooden columns while to one side a low, small stone wing housed the laundry and privies. Inside, the heated hall (referred to as "the great hall") measured 25-by-50 feet with a staircase to the second floor and five doorways to the adjoining rooms.

The Coopers celebrated son, James Fenimore Cooper (1789-1851), wrote a full description of his childhood home in a manuscript that was published in 1921. But, to give an impression here of the main room (the central hall), under the guise of depicting the fictional "Templeton" in his book The Pioneers (1823), Cooper described it as follows:

In the center of the hall stood an enormous stove... The room was carpeted, and furnished with convenient, substantial furniture... There was a sideboard of mahogany, inlaid with ivory, and bearing enormous handles of glittering brass, and groaning under the piles of silver plate... prodigious tables... in a corner, stood a heavy, old-fashioned, brass-faced clock, encased in a high box, of the dark hue of the black-walnut... An enormous settee, or sofa, covered with light chintz, stretched along the walls for near 20-feet on one side of the hall... A Fahrenheit's thermometer, in a mahogany case... Two small glass chandeliers... gilt lustres were affixed to the frame-work of the numerous side doors... that bore each a little pedestal in its centre (with) small busts in blacked plaster of Paris, Homer, Shakspeare, an urn etc. The walls were hung with a dark, lead-coloured English paper, that represented Britannia weeping over the tomb of Wolfe.

On the west side of the house was the dining room, with a trap door that connected it to the kitchens in the basement.  As it enjoyed the best view over Lake Otsego, when not in use it was transformed into a formal parlor. Upstairs on the first floor were six bedrooms (two for guests, four for the children) plus store rooms and a further staircase leading up to the 30-by-15 foot attic with four windows, where the servants slept.

After most of their children had left in 1805, William and Elizabeth Cooper lived in the house with a reduced staff of four: their butler, Joseph Stewart (who appears in the background of Elizabeth's portrait in the hall); their cook, Sarah; Betty the chambermaid, and a hired black houseman. The servants would have spent most of their time working in the kitchen in the six-room basement. Each room had a large window and a "good strong door" and another staircase led up to the pantry.

Following William's death in 1809, Mrs Cooper lived on at Otsego Hall with her son, Samuel, and his wife. But, when she died, the children sold the house to William Holt Averell (1794-1873) who grew up at Averell Cottage. But, he didn't occupy the house and it stood empty for nearly 16-years while gradually falling into further disrepair.

It wasn't until the Summer of 1834 that the Cooper's most celebrated son, James Fenimore Cooper (1789-1851), returned from several years in Europe, bought the house, and determined to restore it in a style that he felt would add some much needed culture and diversity to the American landscape, away from the Grecian plainness of the Federal-style that he perceived as a "malady" to have swept across America.

James Cooper immediately set about transforming the house into one of America's first Gothic-Revival mansions complete with battlements, mullioned windows and turrets, albeit, as he put it, "a mongrel of the Grecian and Gothic orders". In England, he had been bowled over by the beauty and craftsmanship of Westminster Cathedral and in Scotland he had been similarly swayed by Sir Walter Scott's Abbotsford, now determining not only to link his writing, but also his home, to the Scot. Surprisingly, he was unmoved by Strawberry Hill that he dismissed as, "a tiny castle... a sort of architectural toy... it may be possible to see the wit of Walpole, where I saw nothing but his folly".

Cooper enlisted the help of his friend, the portraitist (and later famous inventor), Samuel Morse (1791-1872), who designed the crenellated towers: one at the front of the house and the other to the east. Having increased the grounds to 5-acres, Cooper laid out winding paths within the gardens and planted trees with strict instructions that there were to be no straight lines of anything, anywhere. The picket fence was replaced by a crenellated stone wall but his plans for an elaborate, habitable two-story towered gate/gatehouse never came to fruition and instead the entrance was marked by a modest Gothic gate.

Internally, Cooper raised the ceiling height on the ground floor from 10 to 13-feet. He replaced the windows with those mullioned in the Gothic style and added battlements (crenellations) to the roofs which caused their own inconveniences to modern living, often causing leaks particularly after snow had clogged up the drains and gullies.

The Coopers - James, his wife Susan DeLancey (1792-1852), and their younger children - had initially spent their summers at Cooperstown, but eventually they sold up in New York City and moved permanently to Otsego Hall. After James died, his children sold the property for $10,000 to their brother-in-law, Henry Frederick Phinney (1816-1875). After being significantly enlarged, he opened it as the Cooper House Hotel. But in 1853, within only its first year of business, a fire broke out and the old hall was burned to the ground.

In 1855, two of the Coopers unmarried daughters (Susan and Charlotte) built Byberry Cottage having made use of bricks, doors, bookcases and staircases all salvaged from their old family home, Otsego Hall. The grounds make up part of Cooper Park today.

William Cooper's Town: Power and Persuasion on the Frontier of the Early American Republic By Alan Taylor

The Last of the Mohicans By James Fenimore Cooper

The Last of the Mohicans By (Starring) Daniel Day-Lewis, Madeleine Stowe, Jodhi May

The Leatherstocking Tales: A Library of America Boxed Set By James Fenimore Cooper

Around Cooperstown in Vintage Postcards By Brian & Becky Nielsen