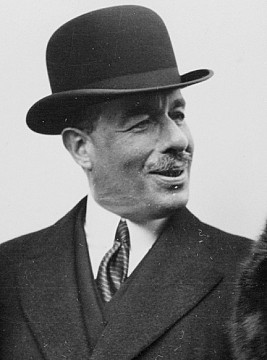 He was born in Hull, Yorkshire, where his father had already established a hugely successful art and antiques dealership. He was the brother of Charles who was an equally noted dealer in Tudor and Elizabethan furnishings in New York. Joseph joined the family firm and through a combination of an exacting eye, charm, wit, style, and savvy he became the art dealer to the super rich in America. As he noted, "Europe has a great deal of art, and America has a great deal of money". As a man, he was described as, "an extraordinary character - a unique mixture of arrogance and humility, of shrewdness and simplicity, of modesty and extreme ostentation". He was created a Baronet in 1927 and was raised to the Peerage as Baron Duveen of Millbank in 1933.

He was engaged to marry the daughter of a South African millionaire but ditched her in favor of Elsie Salomon from New York, whose father in contrast was an obscure tobacco merchant. They first lived on Fitzjohns Avenue in London before moving to 24 Norfolk Street off Park Lane. In 1923, he purchased the Duveen House in New York and divided his year between there and 39 Green Street, also off Park Lane. In 1931, he purchased an estate in England, Fowler's Park in Kent, and retired there in 1937. He left one daughter, Dolly.

Duveen: The Story of the Most Spectacular Art Dealer of All Time By S.N. Behrman

Duveen: A Life in Art By Meryle Secrest