Completed in 1919, for Charles M. MacNeill (1867-1923) and his wife, Marion Tapp Parsons (1885-1963). Their distinctive Beaux-Arts townhouse was designed by Frederick J. Sterner and occupying a plot of 111.9-by-100.8-feet it stood opposite the imposing Carnegie Mansion at the northwest corner of Madison Avenue and 91st Street. In 1916, MacNeill had purchased the plot from Andrew Carnegie: the steel baron had not only purchased the land on which he built his home, but also all the land it overlooked, thereby ensuring that he would never have to gaze out of his windows onto anything he found displeasing! From 1923, this was home to Lord Duveen, the most famous art dealer of the Gilded Age and the undisputed arbiter of taste to the super rich....
zoom_in 2 images 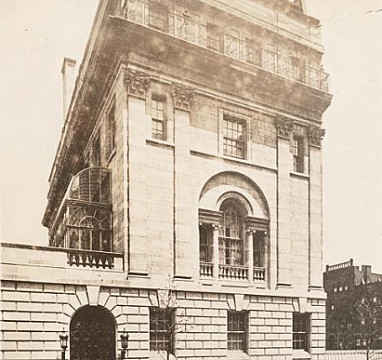 Charles MacNeill was a doctor's son from Illinois who grew up in Colorado and co-founded the United States Reduction & Refining Company before serving as President of the Utah Copper Company. He was a founding partner in the famous Broadmoor Hotel at Colorado Springs and it was he who commissioned the architects - Warren & Wetmore of New York - to design "the Grand Dame of the Rockies". He met his wife in Colorado while she was married to Theodore D. Irwin. After divorcing him in 1909, they were married in Paris the following year before returning to her native New York City.

MacNeill was reported to have died of pneumonia in 1923, but those close to him suspected murder at the hands of the Western Federation of Miners. To add to the mystery surrounding his final years, his wife left for Europe in 1921 and although she inherited the bulk of his $1.5 million estate (they didn't have children), she didn't return to the States until 1924 and by 1925 was married to husband number three, Willing Spencer. In the same year that Charles died, their elaborate townhouse was sold to the legendary art dealer, Joseph (later Lord) Duveen, a debonair Englishman who personified taste and charm that he united with a sense of style that was irresistible to America's super rich.

The house was unusual in several respects: it was entered via a gate on the street that led into a courtyard garden before reaching the front door so that the house occupied just two-thirds of the 12,000-square foot plot. Inside, the central hallway rose up the full 5-stories with a pair elevators on each side and an organ. The Drawing Room (35-by-35 feet) was at the front on the first floor, marked by the distinctive Palladian window.

When Duveen purchased the house, he commissioned John Russell Pope to make several alterations, most notably adding the "striking" and absolutely obligatory two-story art gallery that was filled with light from vast, tall windows. It was from this room that many of the most expensive paintings ever sold in America made their way into the mansions of people such as Mrs Anna Dodge, Andrew W. Mellon, Henry Clay Frick, J.P. Morgan etc.

In the 1920s, a young Kenneth Clark (future art historian) was invited to dine here. Dinner was served on a legendary service of blue Sèvres porcelain that had been made for Catherine the Great circa 1780. Clark naturally complemented his host on its beauty and expressed what a privilege it was to be using the service. Duveen shrugged jovially, "Sèvres service? Nothing. Eat off it all the time!" Meanwhile, Lady Duveen had thought that Clark was addressing her and replied: "Yes it is nice and we don't get it out every day, I can tell you. The last time we used it was for (Prime Minister) Mr Ramsey MacDonald"!

Down Comes the Hammer

The Duveens spent half their year in New York and the other half in London at 39 Green Street off Park Lane. In 1931, he purchased Fowler's Park in England, a 23-bedroom house on an estate of 50-acres where he intended to retire. By 1937, his health was failing and he returned to England, putting his New York townhouse on the market for $1 million the following year. In 1939, it was held by the Gainsborough Real Estate Corporation when the Mutual Life Insurance Company foreclosed on the mortgage. Even though the house ($440,000) was more valuable than the land ($320,000), it was demolished in June, 1940, and replaced by the principally nondescript 16-story apartment building found at the same address today... I think we can guess which Carnegie would have preferred.

Duveen - The Story of the Most Spectacular Art Dealer of All Time By S.N. Behrman