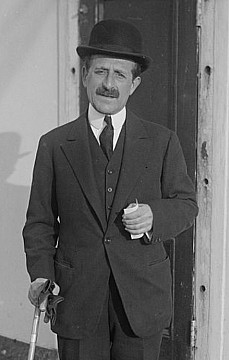 He was born in Hull, England, where his father and uncle founded a successful art and antiques business (Duveen Brothers) which they took to Bond Street, London, and Paris. Charles and his brothers then took it to New York where it became perhaps the most pre-eminent antiques firm of the Gilded Age era. Whereas his brother, Lord Duveen, made a name for himself selling art and porcelain, Charles traded under the name "Charles of London," specializing in rare antiques particularly from the Tudor and Elizabethan period, sourced from the country houses and castles of England's declining aristocracy. He was, "probably one of the most competent authorities on Elizabethan furniture and house decoration in (the United States) and in Europe".

Having joined the family firm after leaving school at age-18, he spent the next twelve years travelling extensively across the world collecting rare furniture, art, objets d'art and porcelain that was shipped back to England to be sold from Bond Street. After twenty years with his brothers, he set up on his own account in London and New York. Charles is credited with making Tudor and Elizabethan furnishings (notably panelling) fashionable in the States. His first showroom in New York was on Fifth Avenue at 28th. For twenty years he operated from 718 Fifth Avenue and then in 1931, he and his brother Joseph built the sumptuous 52 East 57th Street - said to have been more a museum than a shop.

Among the homes Charles played a large role in decorating and furnishing were: Ronaele Manor, for the Widener-Dixons; Virginia House, for the Weddells; Fair Lane, for Mrs Henry Ford; W.A. Clark's New York mansion; Hurstbourne Farm at Louisville, Kentucky, for Alvin T. Hert; Planting Fields on Long Island; and, Loewmoor on Long Island. In 1927, he sold a room that had been used by King Charles I in Devonshire to William Randolph Hearst for $150,000. His business in America became so busy that he closed his London branch in 1933 before ill health forced him to retire just five years later in 1938.

Charles Duveen was the founder and honorary President of the Antique & Decorative Arts League. He had enjoyed a lifelong passion for riding and was a regularly seen riding through Central Park with several of his dogs running behind. He was Commodore of the Hastings-on-the-Hudson Yacht Club, a Freemason, and a member of the British Commonwealth Club. In 1911, he built "Far Field" at Ombersley in Worcestershire and he owned another house at Hastings-on-Hudson, New York. He was as well-known in society in America as he was in Europe. He died at Yonkers, survived by his widow and one son.