Completed in 1777, for John Penn (1729-1795) and his second wife Anne Allen (1746-1840). Also sometimes misspelt "Lansdown" or "Landsdown" this Palladian mansion was, "supposed to be the best country house in America". Its notable residents included one of the first American millionaires, William Bingham (1752-1804); Governor Edmund Jennings Randolph (1753-1813); and, Joseph-Napoléon Bonaparte (1768-1844), the exiled former King of Spain who lived here before taking up at Point Breeze....
zoom_in 3 images 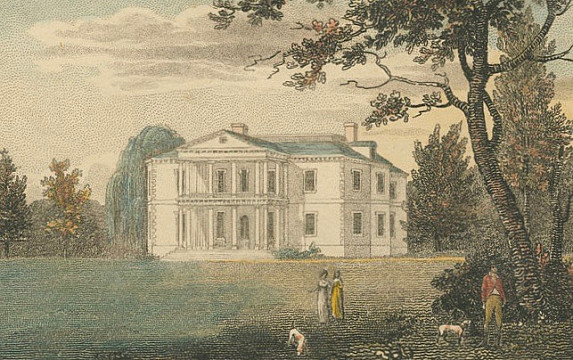 John Penn was the eldest grandson of William Penn and the last Colonial Governor of Pennsylvania. His wife, Anne, had grown up at nearby Mount Airy. In 1773, they began on work on the house and transformed 142 of its surrounding acres into parkland. It sat just across the river from Mount Pleasant, former home of the infamous turncoat, General Benedict Arnold. In 1784, the Penn's named their home in honor of their great friend, the Earl of Shelburne, the former British Prime Minister who had supported autonomy for the American Colonies. In that year, Shelburne had been elevated to the title of 1st Marquess of Lansdowne and his spectacular townhouse in London, Lansdowne House, had almost certainly inspired parts of the Penn house and its parkland.

The park was entered via a pair of carriage gates. The drive was lined with marble statuary and wound its way up to the house for a quarter of a mile taking in panoramic vistas and shaded by magnificent Catalpa trees. It terminated in a horse-shoe in the front of the house that stood on a bank overlooking the river, 114-feet below. John Adams later remarked Lansdowne to be, "a splendid house (with) gravel walks, shrubberies and clumps of trees in the English style on the banks of the Schuylkill".

Built in the Palladian style, the facade was dominated by a two-story pedimented portico supported by two separate sets of Ionic columns on each floor and a second floor with a terrace fronted by a balustrade. Octagonal bays with uninterrupted views over the river protruded from either side of the house, and at the rear stood a heavily pilastered and arched one story portico. The hipped roof with iron railings acted as an observation platform from which the grounds could be enjoyed and surveyed from all sides. Typically for the period, the interior was designed around a center hall plan and each of the spacious reception rooms led onto another, allowing guests to circulate freely.

In 1902, an interesting account of some of the finer details of the house emerged in a Denver newspaper from a Mr Bailey, who was one of the three boys who accidentally set the house on fire in 1854: "It was the queerest building you could imagine on the inside. There were secret passageways all through it. By pressing what seemed to be a knot in the wooden furnishings, a door would open right out of the wall and admit you to another room that seemed to have no doors. But pressure on another knot showed another open door. All the rooms were arranged in this manner. There was also an underground passage from the cellar, which came to the surface a quarter of a mile away. Just why all this precaution was taken in the construction of this mansion, I do not know, and I was so young then that I did not realize what a grand old place it was."

The parkland was laid out in winding walks, "diversified with open spaces of clean, green sward (lawn), and magnificent groves of majestic trees"... "Ravines and valleys, romantic dells and sylvan glades enhanced the beauty of the spot". Behind the house were boxwood gardens, "a large green-house, filled with rare flowers and tropical fruits... a stable of grand proportions (which during Bingham's tenure housed imported thoroughbreds)," and an elegant bath-house.

The Last Colonial Proprietor of Pennsylvania, and the Greenleafs

Despite having lost all his proprietary rights over the family's 24 million acres, John Penn had sworn an oath of loyalty to the new Commonwealth of Pennsylvania which allowed him to continue living at Lansdowne House. The Commonwealth paid him and his cousin, Colonel John Penn, compensation of £130,000, which was about a tenth of what the land was really worth. In 1789, John left for England to seek compensation from the British government and that year leased the Lansdowne to William Bingham (1752-1804), the young millionaire who had only recently finished building the Bingham Mansion.

Bingham and his wife, Nancy Willing (1764-1801), were the undisputed leaders of the Republican Court and Lansdowne fulfilled their needs as a summer/weekend home from which they could continue to entertain on a grand scale. Bingham wrote approvingly of Lansdowne to his old friend General Henry Knox (1750-1806), of Montpelier, Maine: "The buildings are excellent, the land good and the local situation of the place, very agreeable and commanding". But, on hearing that Penn was expected to return to Philadelphia in the spring of 1792 and wished to re-occupy Lansdowne, Bingham wrote,

It is natural to believe that you would be desirous of repossessing yourself of a country seat to which Mrs Penn and yourself must be particularly attached... I never viewed myself as a tenant on any other conditions, than in entire subserviency to your interests & convenience - the moderate terms on which the lease was granted, could imply no other species of arrangement. I therefore cheerfully resign the same, with my best wishes for your long enjoyment of Lansdowne.

Penn only lived long enough to enjoy Lansdowne for three more years, dying in 1795. Only weeks later, his widow sold the estate for $37,000 to James Greenleaf (1765-1843) - who five years later would marry her niece, Ann Penn Allen (1768-1851). A business associate of Robert Morris, Greenleaf hosted lavish parties here with his wife until Greenleaf's fortunes took a nosedive and Lansdowne was seized by the Sheriff.

The Binghams, French Royalty, & Summer Home to the Governor of Virginia

In 1797, Lansdowne was purchased at auction for $55,100 by none other than the Penn's old tenant, William Bingham (1752-1804). Despite the economic Panic of 1797, Bingham paid $31,050 upfront and took on the $24,050 mortgage. He considered the price over the odds (and as the owner of more than 3 million acres in Maine and Pennsylvania he was a man who understood the value of property!) but it was a present for his beautiful wife, Nancy, upon whom he doted.

Bingham made several improvements to the mansion, most notably erecting the handsome gate lodges set 100-feet apart on either side of the estate's entrance. These were designed by Henry Ashley Keeble who was also thought to have designed the gate lodges at The Woodlands. In the summer of 1797, Robert Gilmor Jr. (1774-1848) accompanied the Vicomte de Noailles to Lansdowne and recorded his thoughts in his diary:

It is a most superb place, & supposed to be the best country house in America. It commands a noble view of the Schuylkill & the seats in the neighborhood, & at a distance, the steeples of some of the churches of Philad'a. I had the pleasure of seeing at Lansdown the two eldest daughters of the celebrated Count de Grasse... George Clymer (1739-1813) drove Mr Bingham & myself out in his Phaeton. The three princes (the Duke of Orleans & his brothers) dined with us, & in the evening the usual sports on the lawn were resumed, & the party was a very pleasant and agreeable one among people whom we should never have expected such perfect freedom and ease.

In 1798, the Bingham's eldest daughter, Ann, married Alexander Baring (1774-1848), 1st Baron Ashburton. The marriage had been scheduled to take place at Lansdowne but an outbreak of Yellow Fever in Philadelphia necessitated a change of plan and instead they were married at the Bingham's seaside estate, Bingham Hill, at Rumson, New Jersey.

Bingham had apparently intended to build the newly weds a house near Lansdowne, but for the first summer of their marriage they lived in another small house erected by him on the estate that they called "The Hut". This house later became the caretakers home.

After the death of Mrs Bingham in 1801, her distraught husband left America forever and died in England just three years later, apparently of a broken heart. The Bingham Mansion was sold along with the majority of its contents in, "the most opulent auction the nation had seen". But, Lansdowne was held in trust by the Baring family for his only son, William Jr., who was then merely an infant. It was first leased to Edmund Jennings Randolph (1753-1813), the Governor of Virginia who was the first U.S. Attorney General. He and his wife, Elizabeth Nicholas (1753–1810), spent their summers here until 1813.

On April 20, 1816, Samuel Breck (1771-1862) recalled that "Farmer Bones" - who held the keys for the house - had met with the next tenant who had taken the house for a year. Bones, "had been in his company in the morning and found him a very plain, agreeable man". The "plain man" was the former King of Spain, Joseph-Napoleon Bonaparte!

Joseph had then just arrived from France after his brother had been defeated at Waterloo. Napoleon had advised him to find a home between Philadelphia and New York, secluded enough to avoid unwarranted attention, but within easy reach of news. Bingham's house was an obvious choice not only because of its beauty, but also as the Binghams were well-known to the Bonapartes: It had been William Bingham who provided Thomas Jefferson with the gold to finance the Louisiana Purchase, and it was also William Bingham who almost single-handedly forced Congress to call off an impending war with France.

When Bonaparte held a garden party at Lansdowne in 1817, Pennsylvanian high society was intrigued to observe that he in fact bore a closer resemblance to an English gentleman farmer at his villa than he did to a deposed King. He remained here only until his new chateau in New Jersey, Point Breeze, was complete - which was anything but plain!

Up in Fireworks and Back to the Kiln

After 1817, the house was rarely occupied. Its owner, the now grown up William Bingham (1800-1852), had built the Bingham Mansion for his new wife at Montreal. They lived there from 1821 until 1833 when they moved to Paris. There, young Bingham sank into the depths of drunkenness and was scarcely sane while his wife led a scandalous life with many lovers. Their final move was to Broome Park in England. By the terms of the elder Bingham's will, Lansdowne now reverted to William's two elder sisters who had both married two of the Baring brothers and were also resident in England.

As it sat empty, Lansdowne was dutifully maintained by the caretaker who lived at "The Hut". On July 4, 1854, a group of boys playing with firecrackers accidentally set the house alight and despite the best efforts of the inebriated patrons of the nearby Blue Bell Tavern, the house was gutted and left in ruins. In 1866, the Baring family put the estate up for sale with a caveat that the land must be put to public use. A consortium of Philadelphia businessmen immediately purchased it for $84,953 with the intention of creating a public park and ceded the property to the City of Philadelphia as an addition to Fairmount Park.

In 1876, Horticultural Hall at Philadelphia's Centennial International Exhibition was erected on the site and it stood there until it was demolished in 1954. For a while, the splendid gates that were rebuilt by Bingham in 1798 stood at the corner of 48th and Parkside, until they too were demolished to make way for a brick kiln.

Pennsylvania: A History of the Commonwealth By Randall M. Miller & William A. Pencak