Completed in 1837, for Mrs Elizabeth Apthorp (1782-1877), whose father-in-law was a first cousin of "America's first native-born architect" Charles Bulfinch. Her house was described as an Etruscan villa by its architect, Alexander Jackson Davis, who two years previously had finished the Henry Whitney House on Whitney Avenue and was just then emerging as one of America's most acclaimed - and sought after - architects. Over the years, the house has been added onto to such an extent that it has been called, "a field day for architectural detectives". Since 1974, it has served as part of the Yale School of Organization and Management, known as "Evans Hall"....
zoom_in 2 images 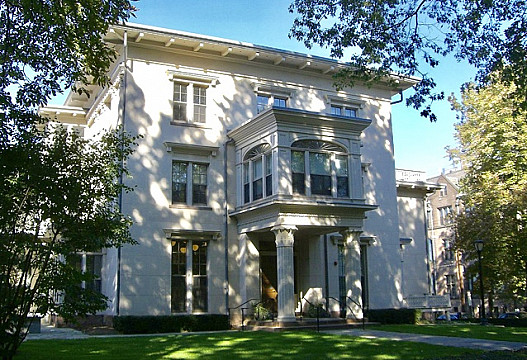 Mrs Apthorp, born "Betsey" Davenport, was a direct descendant of the founder of New Haven and its first minister, John Davenport (1597-1670), one of the most fanatical of the Puritans who doubtless would have been horrified by this house! The Davenports remained prominent in the community and both her uncle, John (who lived at the Davenport House in Stamford) and father represented Connecticut in Washington. In 1804, Betsey married Charles Ward Apthorp, a grandson of Charles Apthorp who was Boston's wealthiest merchant prior to the French and Indian War. All five of their children were baptised at Stamford and remained in Connecticut, but Charles both started and ended his days in Boston, and certainly from about 1830 he and Betsey lived apart.

Having lived for the previous decade with her widowed half-sister, Mrs Abigail Whelpley, in a sizeable home typical of New England at 31 Hillside Avenue, Betsey harbored grander aspirations for herself and her then four unmarried daughters. Her new 2-story, white stuccoed house with matching wings took two years to build (1835-1837) and while it followed the principle elements of Greek-Revival architecture, the roofline has distinctive Tuscan features and the columns supporting the portico were given an Egyptian flair.

On its completion, a string of hopeful suitors for the four remaining Apthorp girls made their way up to the house, two of whom - a New Yorker and a Bostonian - finally succeeded, and both in 1846. In 1855, the former, "the fabulously wealthy" Joseph Sampson, re-employed Davis on his mother-in-law's behalf and added a further floor to the house, giving it its present height. Mrs Apthorp and her two unmarried daughters remained here up until her death in 1877, when she bequeathed it to Yale University.

From 1894, the university leased the house to Mrs Cady who opened it as Mrs and Miss Cady's School for Young Girls/Young Ladies Seminary, which boasted that, "New Haven families will find it unequalled as a day school for girls". In 1899, when Timothy Dwight, the 12th President of Yale retired, the house was then given to him in exchange for his old house that stood on what is now the present site of Sprague Memorial Hall. The Dwights lived here until his death in 1916 when the university sold it. In 1928, it was sold back to Yale and then served as a residence, women's dormitory, and academic offices up until 1974 when it became part of the School of Organization and Management, as it remains.

New Haven, Then and Now By Colin M. Caplan