Founding Member of the American Institute of Architects 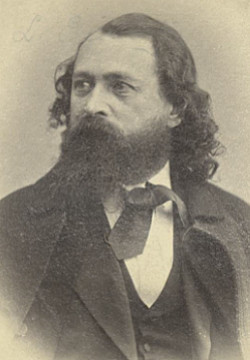 He was born at Prague in Bohemia (now the Czech Republic). After attending school there he studied land management at the Vienna Technical University in Austria. But, at the age of twenty in 1843, he emigrated from Vienna to New York where he began his architectural training as an assistant to Richard Upjohn and Cyrus Lazelle Warner whose daughter, Harriet, he would marry in 1845. The following year, he partnered with Otto Blesch and worked on the interior of St George's Episcopal Church on Stuyvesant Square when he was approached by P.T. Barnum to build Iranistan, the first example of Indo-Islamic architecture on the American continent. His brother, Marc, joined him in New York that year (1846) and founded the major construction firm, Marc Eidlitz & Son, that built the St. Regis Hotel among many others.

In 1857, Eidlitz became a founding member of the American Institute of Architects and two years later he joined the Century Association. In 1881, he published a major book The Nature and Function of Art, More Especially of Architecture which proposed an organic theory of architecture that wedded German notions of art and science to American transcendentalist concerns as promoted by Ralph Waldo Emerson. His architectural works included the Brooklyn Academy of Music; the former Temple Emanu-El; the Broadway Tabernacle; the Tweed Courthouse; and, New York State Capitol's Assembly Chamber in Albany. He was born into a Jewish family and while he is often referred to as America's first Jewish architect, from the 1850s he no longer associated with his heritage and brought his children up in the Christian faith while his brother converted to Catholicism.

Leopold Eidlitz: Architecture and Idealism in the Gilded Age By Kathryn E. Holliday

The Nature and Function of Art, More Especially of Architecture By Leopold Eidlitz