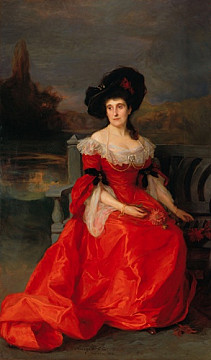 She was born in Frankfurt and grew up between London and Paris. Her father ran the Naples branch of the family bank and her mother was the daughter of Nathan Mayer Rothschild who ran the family bank in London. She was intended to marry her cousin, Edmond de Rothschild, but had fallen in love with the widowed Agénor de Gramont, then styled the Duc de Guiche and Napoleon III's Minister of Foreign Affairs when they met at a ball hosted by the romantic playwright, the Comtesse de Martel ("Gyp"). Marguerite's mother approved of the match, but her father disinherited her for marrying outside of her faith. They were married in 1878 when Marguerite converted to Catholicism. Eight years later, her father died by which time she had been re-instated into his will and received 60-million francs. She and her husband lived between Paris and their palatial country estate, the Chateau de Valliere. Two years after her death, her husband married a teenager 37-years his junior, the wild Princess Maria Ruspoli.

She had artistic and literary tastes and was an intimate of Marcel Proust to whom he owed his introduction into the society of the Faubourg Saint Honoré. Her closest friends were Madame Strauss (wife of the composer) and Mrs Meredith Howland (grand-daughter of Cornelius Vanderbilt). She was the mother of three children and the stepmother of Elisabeth, famous for her open relationship with Natalie Clifford Barney.

The House of Rothschild By Niall Ferguson