"Financier of the Revolution" U.S. Founding Father & Senator from Pennsylvania 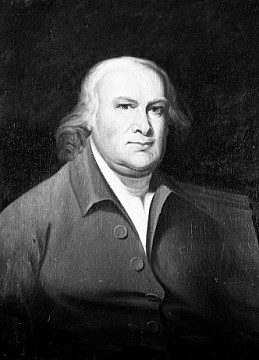 He was born in Liverpool, England, and came to America aged 13 to join his father who had by then prospered in the tobacco business. He apprenticed under Charles Willing in Philadelphia and expanded his business in the Caribbean before becoming a partner with his son, Thomas, in Willing, Morris & Co. They exported flour, lumber and tobacco to Europe and imported sugar, rum, molasses, and slaves from the West Indies and Africa. He signed the U.S. Declaration of Independece and helped import arms and ammunition for the Continental Army. From 1781, he was appointed U.S. Superintendent of Finance and U.S. Agent of Marine, establishing the Bank of North America in the same year. The successful role he played in raising finances for the army and navy during the war led him to being called, "the financier of the Revolution".

As a member of the Philadelphia Convention in 1787 he co-wrote the new constitution for the United States. As a Federalist, he represented Pennsylvania in the U.S. Senate between 1789 and 1795. His personal finances were severely affected after the Panic of 1796-97, and unable to satisfy his creditors, he spent two years in debtor's jail. Released in 1801, he lived out his remaining days in Philadelphia in comparative modesty.

In 1769, he married Mary White and they kept a townhouse on Front Street, a country home on Schuykill River known as The Hills and a summer home called "Summerseat" at Morrisville, Pennsylvania. In 1781, he built a new city mansion on Market Street which became known as "President's House," serving as the first official residence of the Presidents of the United States until John Adams moved into the White House in 1800. He was the father of (1) Robert Morris III, married Anna Shoemaker (2) Thomas, U.S. Congressman, married Sally Kane (3) William White Morris, died unmarried (4) Esther, married Judge James Markham Marshall (5) Charles, died unmarried (6) Maria, married Henry Nixon (7) Henry, High Sheriff of Philadelphia, married Elizabeth Smith.

Robert Morris's Folly: The Architectural and Financial Failures of an American Founder By Ryan K. Smith

Robert Morris: Financier of the American Revolution By Charles Rappleye