Thomas Willing, 1st President of the First Bank of the United States etc. 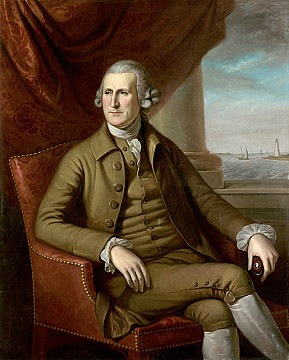 He was born in Philadelphia, the son and grandson of Mayors of Philadelphia. He was educated in England at Bath before entering the Inner Temple, London. He returned to America in 1749 and went into business with Robert Morris. They exported flour, lumber and tobacco to Europe and imported sugar, rum, molasses, and slaves from the West Indies and Africa. In Philadelphia, he was elected a Councilman (1755), Alderman (1759) and Mayor (1763). He was Justice of the Court of Common Pleas before being elevated to Supreme Court Justice of Pennsylvania. In 1775, he was appointed to the Continental Congress and initially voted against Independence but later put £5,000 towards the Revolutionary cause. After the war, he became President of the Bank of North America and then the 1st President of the First Bank of the United States (1791-1807).