Sam Ward, "King of the Lobby" 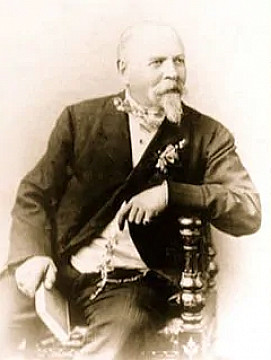 He was born in New York City and was educated at the Round Hill School and Columbia College (1831). He was the elder brother of Julia Ward Howe, author of the "Battle Hymn of the Republic," and their sister Anne was married to a grandson of the ex-King of Naples and Spain, Joseph Bonaparte. After graduating, he travelled to Paris to study mathematics where he bought the library of the mathematician A.N. Legendre which he later donated to the Astor Library. From Paris, he went to Germany where he received a doctorate from the University of Tübingen. In Heidelberg, he met Henry Wadsworth Longfellow who became a lifelong friend and in 1835 he had his portrait painted by Otto Vogel at Dresden. On returning, to New York he continued his interests in mathematics before having a brief stint at his father's banking house - Prime, Ward & King. He set up on his account after 1839 but by 1847 he was bankrupt and separated from his family that prompted him to join the Gold Rush to California in 1849.

In California, he took leave of his previously genteel existence before travelling to Mexico, Nicaragua, and Paraguay where he represented the interests of various corporate and government bodies. By the end of the Civil War, he had settled in Washington D.C. having found his calling lobbying the government on behalf of powerful financiers. He gained a reputation as an unparalleled host and gourmet and became known as the "King of the Lobby". His influential friends included Thomas F. Bayard, William Maxwell Evarts, William Henry Hurlbert, George Ticknor, and the Earl of Rosebery. In 1837, he married the heiress Emily Astor, daughter of William Backhouse Astor "The Landlord of New York" by whom he had one daughter, Margaret, who was raised by her grandparents at Rokeby before marrying John Winthrop Chanler. Emily died in childbirth in 1844 after which Ward remarried Medora Grymes from whom he would eventually separate. He had two sons by Medora, both of whom predeceased him in the 1860s. In 1882, he was forced to flee his creditors in New York and spent his last two years in Italy with his sister, Louisa.

King of the Lobby: The Life and Times of Sam Ward, Man-About-Washington in the Gilded Age By Kathryn Allamong Jacob