Completed in 1815, for Senator John Armstrong Jr. (1758-1843) and his wife Alida Livingston (1761–1822). Located slightly back from the east bank of the Hudson River, south of Barrytown, the estate is perhaps most famously associated with the Astor family. Initially named "La Bergerie" ("the sheepfold") for the Merino sheep that grazed here (a gift from the Emperor Napoleon to Mrs Armstrong), it was rechristened "Rokeby" in 1836 for Sir Walter Scott's poem of the same name that he wrote specifically to help fund the building of Abbotsford. The land on which Rokeby stands has been passed down through various lines of the same family since the 1600s. Enjoying breathtaking views over river and mountains, the house has also remained in the same family and although it is a private home, it is now also available as an events venue....
zoom_in 20 images 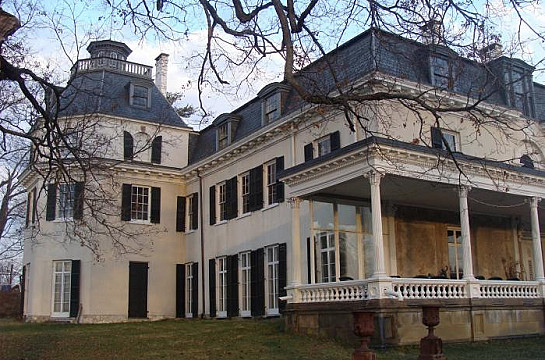 In the 17th century, Mrs Alida Armstrong's great-grandfather, Robert Livingston, 1st Lord of Livingston Manor, accrued an estate of 160,000-acres. As legend would have it, his second son, Robert Livingston (1688-1775), was given 13,000-acres of his father's land in the Hudson Valley as a reward for having prevented a rebellion among the family's slaves. Robert's son - Mrs Armstrong's father - Judge Robert Robert Livingston (1718-1775) married Margaret Beekman (1724-1800), the sole heiress of Colonel Henry Beekman (1687-1775) and through that marriage the Livingston family also came into the possession of the vast Beekman estates along the east bank of the Hudson River in Dutchess County.

Robert and Margaret's children - Alida and her nine surviving siblings - were all given parcels of the Livingston/Beekman land and they all built homes along the same 16-mile stretch of the Hudson River, just south of Alida's childhood home, Clermont Manor.

Escaping the Heat of the White House

In 1810, John and Alida Armstrong returned from Paris where they had lived for six years while John served as the U.S. Minister to France. They sold nearby Blithewood, their home since 1795, and moved to their new home on the Hudson in 1811. But, no sooner had the architects - Armstrong himself along with Joseph-Jacques Ramée (1764-1842) - started on their new home than America found itself embroiled in the War of 1812.

Armstrong was appointed a Brigadier-General before being nominated U.S. Secretary of War by President James Madison (1751-1836). During the War, the President's wife, Dolley, took refuge at the Armstrong's home and the succeeding U.S. President James Monroe (1758-1831) also passed a night there. Armstrong was directly blamed for the British and Canadian troops burning the White House and retired from political life. Here, he settled down to focus on the construction of his new house and the landscaping of its gardens.

The Armstrongs at "La Bergerie"

In 1815, the family moved into the incomplete mansion literally "on top of the carpenters" in consequence of their temporary home having been lost to fire. Once completed, the 20-rooms were adorned with furniture acquired by the Armstrongs during their seven years in France, several pieces of which can still be seen today. The house itself had a three-bay front facade with five bay-side elevations and was built of stone in the Federal style with a low hipped roof and central Palladian window. The builder was a Scotsman, Warner Richards, who was said to have made every panel in the house with his own hands:

There is a central entrance and interior hall which opens into three rooms on each side, and a curved staircase was located at the back of this hall. The staircase returned and entered a rectangular hall with a large skylight on the second floor. The four front bedrooms were accessed from this hall. There was originally a second straight staircase that led from grade to an elaborate door with sidelights on the second floor which was open to the main hall.

The "beautiful, well-planned grounds elicited general admiration" and were occupied by a large herd of merino sheep - a present to Mrs Armstrong from Napoléon himself she having been a particular favorite of his at court. In consequence, the Armstrongs named their new home "La Bergerie" which translates from French to "the sheepfold".

The Astors and "Rokeby"

In 1818, the Armstrong's only daughter, Margaret Rebecca Armstrong (1800-1872), made a fortuitous marriage to William Backhouse Astor (1792-1875) who inherited $20 million and died leaving a fortune of $100 million. When Margaret's mother died four years later, she acted as her father's ward and every summer she and her husband would take leave of the Astor House on Lafayette Place and accompany her father up to La Bergerie.

Mr Astor made several additions to Rokeby including the tower, service wing and mansard roof, but most notably the magnificent octagonal Gothic-Revival library, thought to have been designed by Alexander Jackson Davis (1803-1892). He also employed Hans Jacob Ehlers (1804-1858) to improve the landscaping of the estate in 1846.

Delanos, Chanlers, and the "Astor Orphans"

Around about 1850, Astor gifted 100-acres of the Rokeby estate to his daughter Laura Eugenia Astor (1824–1902) and her husband Franklin Hughes Delano (1813-1893), where they built Steen Valetje (known today as the Atalanta Estate). Franklin Delano was the great uncle of Franklin Delano Roosevelt (1882-1945), 32nd President of the United States. In 1866, Rokeby was described by Benson J. Lossing in his book The Hudson:

Rokeby is delightfully situated in an undulating park, farther from the river than the other villas, but commanding some interesting glimpses of it, with more distant landscapes and mountain scenery. Among the latter may be seen the range of the Shawangunk, in the far southwest. Here Mr Astor's family reside about eight months of the year.

In 1838, the Astor's eldest child, Emily, married the politically astute bon-viveur who created social lobbying, Samuel Cutler Ward (1814-1884). Emily died giving birth to their only child, Margaret Astor Ward (1838-1875), who was raised by her grandparents at Rokeby and in 1862 married Congressman John Winthrop Chanler (1826-1877).

Tragically, Margaret and her husband died within two years of one another leaving nine orphans who were nicknamed "the Astor Orphans". Brought up at Rokeby by a cousin and a revolving door of tutors and governesses, they were a rowdy gang who essentially lived by their own rules, but in later life were all remarkably successful in their chosen paths. The artist, Robert Winthrop Chanler, painted several murals here which can still be seen and in 1895 their family friend, Stanford White, made several architectural alterations.

Richard Aldrich, "the Angel of Puerto Rico," and Rokeby Today

Of the nine surviving Chanler children, it was Margaret Livingston Chanler (1870-1963) who in 1899 gained sole possession of Rokeby and established a dairy farm on the property. In 1906, she married Richard Aldrich (1863-1937), the music critic for The New York Times who was an accomplished piano player and, "very fond of arranging impromptu duets, trios, and other ensemble performances at Rokeby". In 1912, they commissioned Frederick Law Olmstead Jr. to make several improvements to the gardens.

Mrs Margaret Aldrich - through the influence of her great-aunt, Julia Ward Howe - joined various women's rights movements and served as a nurse in the Spanish-American War (two of her brothers were Rough Riders). She gained the sobriquet, "the Angel of Puerto Rico" and was instrumental in the foundation of the Women's Army Nursing Corps.

The Aldrichs were the parents of two children: an adventurous daughter, Margaret; and, a son to whom Rokeby was passed, Richard Chanler Aldrich (1909-1961). Richard married Susan Kean Cutler (1914-1998) - granddaughter of Hamilton Fish II - and they both died at Rokeby, which their children and grandchildren continue to call 'home' today.

The Astor Orphan: A Memoir By Alexandra Aldrich

When the United States Spoke French: Five Refugees Who Shaped a Nation By Francois Furstenberg

Life Along The Hudson: The Historic Country Estates of the Livingston Family By Pieter Estersohn & John Winthrop Aldrich