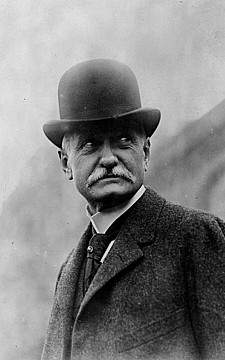 He was born and brought up in Lovingston, Virginia. He was educated there by Baptist ministers but did not attend college. At the age of seventeen, he started his career in the dry goods business of John S. Barry (his future father-in-law) at Baltimore, Maryland. Barry recognized his raw talent and helped him get a job on Wall Street where he was tutored by William C. Whitney. He became a partner in Lee, Ryan & Warren and in 1874 his firm purchased a seat for him on the New York Stock Exchange.

Becoming interested in politics, his financial career was significantly enhanced by his close association with Tammany Hall. In 1883, he founded what would become the Metropolitan Traction Company and by 1900 he controlled the majority of New York's streetcars, owning 3,000-cars and 300-miles of track. Having entered the tobacco business in the 1890s, he merged with James Duke to create the British-American Tobacco Company. He furthered his wealth through the purchase of the Equitable Life Assurance Society, mining diamonds with King Leopold of Belgium in the Congo and investments in typewriters and submachine guns. At his peak, he had controlling interests in 30-corporations. He was investigated for corruption in 1908 but no charges were brought against him. When he died, he was the 10th wealthiest man in America with a fortune of more than $200 million that after tax left $140 million between his five surviving sons.

He was born a Protestant and his ancestors were Anglo-Irish but he became a Catholic through his wife, a devout Catholic. They spent over $20 million constructing churches, convents, schools and hospitals not only in New York and Virginia (most notably the Cathedral of the Sacred Heart in Richmond and the Good Samaritan Hospital at Suffern) but across the country. However, Mrs Ryan forbade any of her donations to benefit the African-American community but having given $1 million to charity every year Pope Pius X elevated her to the Papal nobility. They lived for many years on 12th Street before purchasing 858 Fifth Avenue; an apartment in the Andrew Mellon Building in Washington D.C.; "Montebello" near Suffern, New York; and, "Oak Ridge" in Virginia.