Built in the 1820s as a development for the Earl of Grosvenor, Number 35 was the home of General Sir Arthur Paget and his popular American wife, Lady Minnie (Stevens) Paget (1853-1919). It was here that Consuelo Vanderbilt was first introduced - or perhaps more aptly, 'politely pimped' - to the Duke of Marlborough....
zoom_in 1 images 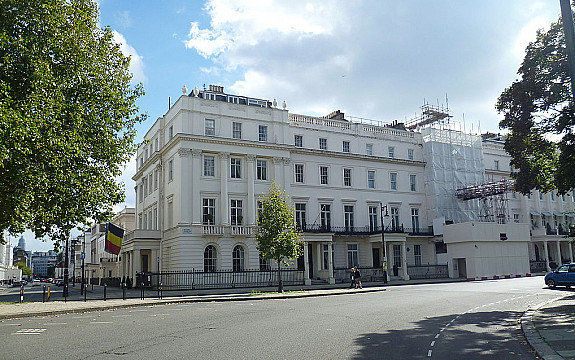 Consuelo recalled her visit to No. 35: "a fine house with lofty rooms in which there was an immense amount of nondescript furniture and numerous tables that were littered with signed photographs in silver frames. She (Minnie) received us (her and her mother Alva) with the mixture of an affection due to an old friend and the condescension that seemed to infect the habituées of the inner circle (the "Prince of Wales Set") of London society".

During the First World War, Minnie loaned the house (pictured in the center of the row) to her sister-in-law, another American, Mrs Pauline (Whitney) Paget to be used a training facility for the charity she had set up in her husband's name, the "Almeric Paget Military Massage Corps". This address was also used on the show Downton Abbey as the home of the fictitious character, Lady Rosamund Painswick, though the interior scenes were filmed at West Wycombe Park. In 2015, it was sold for £40 million, despite needing renovation.

The Million Dollar Duchesses: How America’s Heiresses Seduced the Aristocracy By Julie Ferry

The Glitter and the Gold By Consuelo Vanderbilt Balsan