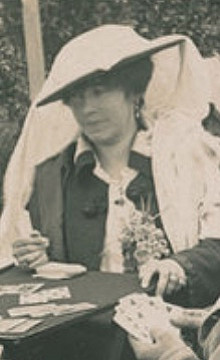 Pauline was born into a tight circle of power politics and big money. Her father was a savvy lawyer who rose to be U.S. Secretary of the Navy, using his position to win friends and close family vast contracts often facilitated by the use of illegal loans. Her father knew how to use society to his advantage and during his years in office at Washington D.C., her parents were said to have entertained 60,000 people; and, in just five years, Mr Whitney had accrued himself a fortune of $40 million! His name was also mentioned as being a possible candidate for U.S. President. The other powerful figure in Pauline's life was her childless uncle, Oliver Hazard Payne, a co-founder of Standard Oil.

Their mothers having been great friends, the American Lady Minnie (Stevens) Paget developed a maternal responsibility towards young Pauline who'd lost her mother in the prime of her match-making life - just four weeks after Pauline's hastened introduction into society. But, it was in England while staying with the Pagets in 1894 that Pauline first met her hugely popular and charming future husband, Minnie's brother-in-law, Almeric.

Almeric was the eleventh of the 14-children of Lord Alfred Paget, meaning there was no family fortune to sit back on and he would need to make his own way in the world - albeit helped by an impeccable bloodline! He dropped out of school and came to St. Paul, Minnesota, where he settled down to work and not before long made a small fortune through real estate and insurance. A contemporary account described him as, "a straightforward, hard-working, manly fellow, whose self resilience is due wholly to achievement". These traits won the admiration of Pauline's industrious father, while his unaffected warmth and charm made him equally popular with match-making mothers.

Despite an age difference of twelve years, Pauline was as switched-on and mature as her future husband - she was also a notoriously sharp card-hand. In 1894, this forthrightness led her to being labelled as one of a group of privileged girls who'd espoused various socialist views, known as "The Downtrodden" they included among others Pauline's great friend, Consuelo Vanderbilt. As this news hit New York's gossip columns, Pauline fell seriously ill and the Whitney family decided on a fortuitously timed trip to Europe.

In December, 1894, Almeric was invited to join the Whitney party which would mark the start of their rather blissful courtship. On reaching England, they continued their maritime travels to the Mediterranean Sea and then down the River Nile on a traditional sail boat to Cairo. If the press and certain gossipmongers had been concerned by Pauline's socialist views, the Liberally-minded Almeric was certainly not. By the time they had returned to Greece, Pauline's face was "rosy light" and their engagement was soon official.

Their marriage was a love-match, quite unlike Consuelo's wedding-of-the-decade a week earlier that today has eclipsed Pauline's, but at the time hers was a far better party! The Paget-Whitney wedding was not a quiet affair, and whereas all the Vanderbilts had been barred by Alva from attending the wedding-of the-decade, they were came out in force to celebrate Pauline's. Also in attendance was The Mrs Astor... and the U.S. President. The wedding gifts given that day dazzled with a profusion of diamond and pearl, and it was rumored that Pauline's dowry was an equally sparkling $2 million!

Following an extended honeymoon to Europe, the couple returned to New York where Almeric resumed work with Pauline's uncle, the industrialist Henry Melville Whitney. Pauline now started to make her mark on society as one of its up-and-coming hostesses then led by the old vanguard of Mrs Astor and Mrs Mills. But, despite courageously surviving a carriage accident in 1898, Pauline's health was in decline which precipitated the Pagets move to England to be close to the European spas she liked to frequent.

Pauline inherited a further $2.5 million when her father died in 1904, which would have been more had it not been for her siding with her uncle during the furore over his second marriage - described in the history of the Whitney Mansion. Nonetheless, coupled with Almeric's success in business, they lived a very pleasant existence between their townhouse in London at 39 Berkeley Square, various rented country houses, and their villa at Cannes in the South of France. Neither did she allow her fragile health to interrupt her fun where possible: she couldn't play tennis, but she took up billiards, rode, and was one of the first members of the Automobile Club of Great Britain. By 1907, the Pagets were noticeably spending less time together, but nonetheless Pauline dutifully supported her husband's political career and threw herself into society to stoke his progress.

During the First World War, Pauline established a corps that is not often remembered but gave vital relief to those injured soldiers in need: the "Almeric Paget Military Massage Corps," paid to train and place masseurs in military hospitals. Pauline's sister-in-law, Minnie, loaned her London townhouse, 35 Belgrave Square, from which to train the girls and not before long 300 girls were employed in England and France. She also established a Convalescent Camp at "Summerdown" near Eastbourne for injured soldiers. She visited frequently and was affectionately known by the soldiers as "The Angel of Summerdown".

In 1916, Pauline's health deteriorated rapidly. She died leaving $1 million in trust to her husband and roughly $5 million to each of her daughters. A group of wounded soldiers acted as her pallbearers and she is buried in Hertfordshire, England. Two years later, Almeric was raised to the Peerage as Baron Queenborough, in the County of Kent; and, five years later he took another American for his wife, the eccentric Edith Starr Miller.