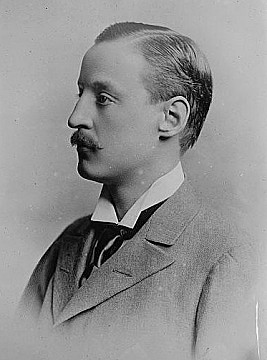 He was born in India and educated at Winchester and Trinity College, Cambridge. By virtue of his birth he was unable to enter business - it was not the done thing for a Duke to sully his hands with trade. He served as a Captain in the Boer War and was later appointed to three minor governmental roles. On inheriting the near-bankrupt Dukedom and Blenheim estate, and being unable to earn money, he conceded that his only option to save the family from disgrace was to marry money. His first attempt failed when the English shipping heiress Muriel Wilson broke off their engagement. Then, following a trip to America where he was introduced to society at a ball held on his behalf at Marble House in Newport, he was famously married to Consuelo Vanderbilt in 1895, although both of them were in love with other people.

Despite being a loveless match, it is the Vanderbilt dowry to which Blenheim and the Marlborough family owe their survival. The dollars were used to restore the structure and replenish the furnishings and library, most of which had been sold off as the family's fortunes had dwindled during the course of the 19th century. Many of the jewels worn by subsequent Duchesses of Marlborough were also coined by the Vanderbilts. Consuelo left her husband in 1906 and the marriage was finally annulled in 1921, when Charles' first cousin, Sir Winston Churchill, did battle worthy of any the 1st Duke might have fought against the indomitable Mrs Alva Vanderbilt Belmont who frequently lashed him with her "notoriously sharp tongue"! Charles would then go on to marry another American who Consuelo had introduced him to and become friends with. But, neither was that marriage a success and the second Duchess took to keeping a gun under her pillow in case her husband tried to enter! They were never divorced, but the Duke eventually evicted her!