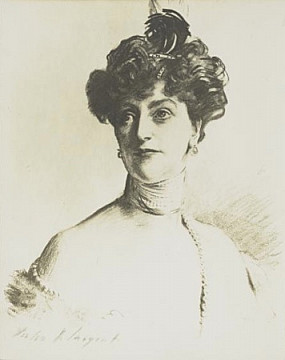 She was the beautiful, green-eyed, raven-haired daughter of a well-respected, sophisticated hotelier and self-made multi-millionaire. Her mother was 25-years his junior and had a voracious appetite for social recognition and success.

On her father's death in 1872, "Minnie" was now worth several million and her mother whisked off to Europe in the hope of securing her a title equal to her looks and dollars. To grease the wheels, her mother exaggerated her fortune and she was soon referred to in the press as the "Great Heiress". But, mother and daughter were left red-faced when a prospective suitor, the Duc de Guiche, retracted his offer of marriage when he learned that her fortune was not as great as had been boasted. Minnie then went back to one of the suitors she - or more accurately her mother - had originally spurned, the kindly (then Captain) Arthur Paget, grandson of the 1st Marquess of Anglesey.

They were married in London in 1878 and the future King Edward VII gave his seal of approval when he personally visited the bride to offer his best wishes. The King would also be godfather to their only child, Louise. As an established and exceedingly popular member of British society, her house on Belgrave Square in London became a magnet for American girls tilting for a title, and aristocrats looking for dollars. Among the many matches she facilitated was the union of Pauline Whitney with her brother-in-law, Almeric. In 1910, Every Woman's Encyclopaedia wrote of Minnie:
Lady Arthur Paget has... been one of the shining lights of English society, and... was one of the most successful and intellectual American women who have ever lived in London... (She) has always been noted for her beauty. After her marriage she became famous as a hostess, entertaining many Royalties, and used to be in former years the mainspring of countless bazaars and other charitable enterprises. Her most noted triumph was the "Masque of Peace and War" given in the early days of the Boer War at the Haymarket Theatre. Members of the peerage were on the stage, as well as in the stalls, and £7,000 was taken at this record entertainment. Her splendid exertions, too, on behalf of the hospital ship "Maine" caused her to receive the personal thanks of Queen Victoria. In appearance, Lady Paget is tall and slight, with dark hair and brunette colouring. She.. lives at 35 Belgrave Square, which her husband has filled with big game trophies.