Built in 1803, for John Jacob Astor (1763-1848) and his wife Sarah Cox Todd (1762–1834). Once the neighbour of the Gracie Mansion and the Prime Mansion, this was the summer home of America's first multi-millionaire. Rather than being a flamboyant showpiece symbolic of others later put up by the Astors, this was perhaps better known for its literary and musical associations, and it was here that Washington Irving penned his novel, Astoria. The 13-acre estate was roughly bordered by today's Henderson Place and East End Avenue, between 86th and 87th. The house was demolished in 1869 and the gardens are today part of the public Carl Schurz Park....
zoom_in 4 images 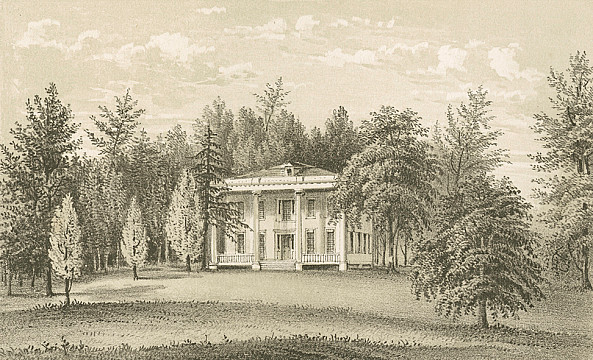 "Hellgate" is often incorrectly assumed to have derived its name from the turbulent confluence of waters found at that part of the East River on the island of Manhattan. But, in fact, it stems from the Dutch word Hellegat - "bright strait" or "clear opening" - which over time was corrupted by the English to "Hellgate" or "Hell Gate".

Coming in from the Wild

In 1803, Astor arrived in New York with $250,000 made primarily as a fur-trader in the lawless backwoods of North America. A first rate fur-trader as he was, was "no ordinary man: he is a soldier-merchant, and unites the gallantry of the one with the shrewdness of the other.... (he) is a bold, square-chested, gaunt man, sun-burnt, with extraordinary long hair as a defence against mosquitoes. He is equally at home on horseback or in the canoe - indefatigable when needful, careless of heat and cold, and brave as steel, as though he bore a charmed life... often he has not only to contend with the Indians, and to right himself on the spot with other traders, but he has to fight his own men hand to hand".

Astor may have been the richest man in America, but he never really learned nor cared for airs and graces. His table manners were notoriously awful, and sometimes he even used the sleeves of his guests to wipe his mouth at the dinner table! But, after 20-years of rough living and with a fortune that would have made an aristocrat whimper, he accepted that it was time to come in from the wild and establish his family among civilized society.

From Astor's point of view, a comfortable but comparatively modest country seat provided his family with an escape from the city during the summer months. But, his wife also saw the social benefits that came from neighbouring several of New York's most socially prominent men and families, notably Archibald Gracie and Nathaniel Prime etc.

Taking Care to be Modest

Astor hired Pierre L'Enfant to design and build his country seat. L'Enfant is among those considered to have designed Gracie Mansion next door to Hellgate, but he was best known as the architect and civil engineer who laid out the street plans for Washington, D.C. Astor was careful not to rub his vast wealth in the face of others (he was a millionaire when few knew of, or had heard of, the expression "millionaire"), and so the house that L'Enfant built for him was luxurious, but neither pretentious nor extravagant.

Astor's new home fitted seamlessly alongside the existing riverside mansions belonging to Manhattan's finest. It was fronted by four two-story corinthian columns with a gable in the front roof and steps leading to a broad veranda from which to take in the view over the East River, past Roosevelt Island, and beyond to the village of Astoria, Queens - named by its citizens for Astor in the futile hope that he'd donate a public building!

Inside, it housed a collection of fine art, furniture, and delicately crafted musical instruments. In an article for Literary New York, the Astor house was described as, "a square two-story frame dwelling of colonial type, painted white, with deep veranda, wide halls, and spacious rooms; set high upon a hill, backed by a forest of towering trees, and fronted by a vast lawn stretching by gentle slope to the cliff at the riverside".

Chiefly at Sarah's behest, Astor entertained several of Manhattan's leading society figures, but he preferred his weekly card games with two old friends from the fur-trading days, Ramsay Crooks (1787-1859) and Jean-Pierre Chouteau (1758-1849). His other passion was music and musical instruments, and he frequently invited close friends and family to Hellgate for private performances by professional pianists or string quartets. A particular joy to him at such evenings was to listen to his eldest grand-daughter, Emily Astor, and her celebrated sister-in-law, Julia Ward Howe, either singing solos or performing duets.

The Astor's eldest daughter, Magdalena, died in 1832 and they took in her only son by her second marriage, Charles Astor Bristed. In the same year, Astor employed the poet and satirist Fitz-Greene Halleck (1790-1867) to live with them at Hellgate as a 'cultural tutor', advising him on paintings and furniture for his collection. After the death of his beloved wife in 1834 and having for the most part handed over the reins of his business empire to his son, William Backhouse Astor (1792-1875), the elderly Mr Astor spent the greater part of his remaining twelve years at Hellgate, in the company of his grandson and tutor.

In 1835, Halleck's old friend from the Knickerbocker Group, Washington Irving, was invited to stay as Astor's guest at Hellgate while he wrote Astoria (1836) - a patriotic account of Astor's failed fur-trading colony at Oregon. It was at Hellgate that Irving had the opportunity to meet the adventurer Captain Benjamin de Bonneville (1796-1878), whose stories so enthralled him that they became the subject of his next book. Irving became quite fond of Astor and all in all the arrangement at Hellgate suited him very well, particularly as it coincided with the building of his own country home, Sunnyside:

For upwards of a month I have been quartered at Hell Gate, with Mr Astor, and I have not had so quiet and delightful a nest since I have been in America. He has a spacious and well-built house, with a lawn in front of it, and a garden in rear. The lawn sweeps down to the water edge, and full in front of the house is the little strait of Hell Gate, which forms a constantly moving picture... I cannot tell you how sweet & delightful I have found this retreat; pure air, agreeable scenery, a spacious house, profound quiet, and perfect command of my time and space.

Lifestyle of the Rich & Famous

A glimpse into Astor's daily routine at Hellgate is afforded through an article written for the New York Tatler in 1842. Its purpose was to allow, "the reader to learn something of the habits, manners etc., of an old gentleman whose daily income is 4,000 & odd dollars":

He rises early, dresses without a valet, and smokes half a pipe of tobacco. He then breakfasts sometimes on milk, but mostly on the most fragrant description of Mocha coffee. Another attack on the pipe follows. The papers then are called for, when his still keen eye falls foul of the money article - but afterwards he goes through the editorials and chit chat of the day, and is mightily tickled when he finds anything better than usual. Pipe again. Then, when he's able, a saunter about and a crack with the neighbours concerning stock or the weather. Next, a two hour's siesta, and then to dinner, whereat John does great execution, for he is a wonderful hand at the trenchery for an old man. The pipe, chit chat, and a mild glass follow, and then the time is spent until 9 o'clock, when he calls for his chamber lamp, and takes up line of march for Blanket Alley.

By this time, Astor's astute eye for real estate had made him a multi-millionaire. As an example into his way of thinking, in 1810 he sold a lot on Wall Street for $8,000 cash. On completion of the sale, the new owner enquired why Astor had sold what everyone knew would be worth $12,000 within just a few years. He replied: "That is true, but see what I intend doing with these $8,000. I shall buy eighty lots above Canal Street, and by the time your one lot is worth $12,000, my eighty lots will be worth $80,000". He was right.

In November, 1847, Astor left for his townhouse at 585 Broadway but never recovered enough strength to return to Hellgate, dying there the following March. In his will, he left Hellgate, its 13-acres plus $115,000 (among other considerable legacies) to his grandson, the scholar and author Charles Astor Bristed, who had spent most of his youth there.

Bristed continued to use the house as a summer home, joined by his first wife, Laura Whetten Brevoort (1823-1860). But, in the year of 1850/51, they leased the house to the English novelist and historian, George Payne Rainsford James (1799-1860). To his friend, Maunsell Bradhurst Field (1822-1875), James wrote a "capital squib" by way of a limerick making light of his hardships on arriving at Hellgate, which by then was only barely furnished and not equipped for winter living.

By the end of the Civil War, the expansion of New York City began to reach the upper east side of Manhattan and what had once been a rural hideaway for the wealthy was fast becoming an industrial sea of factories and tenement blocks - of all those grand country estates, only the Gracie Mansion survives there today. Bristed, now married to his second wife, Grace Ashburner Sedgwick, started to sell off the estate in parcels.
Henderson Replaced

Finally, in 1869, Bristed sold the plot on which his country home was built to John Cleves Henderson (1809-1884). Henderson pulled it down the same year and in 1871 replaced it with the red-bricked terraced row of houses that bears his name today. So it was that the land on which was built the summer sojourn of America's first multi-millionaire became tenements that Henderson intended, "for persons of moderate means" and from 1891 the gardens in which his offspring played had become part of the public Carl Schurz Park.

The Street Book: An Encyclopedia of Manhattan's Street Names and Their Origins By Henry Moscow

Fur, Fortune, and Empire: The Epic History of the Fur Trade in America By Eric Jay Dolin

ASTORIA (A Western Classic): True Life Tale of the Dangerous and Daring Enterprise beyond the Rocky Mountains By Washington Irving

The Adventures of Captain Bonneville By Washington Irving

The Man with the Sawed-Off Leg and Other Tales of a New York City Block By Daniel J. Wakin

Knickerbocker: The Myth behind New York By Elizabeth L. Bradley