Built from 1807, for Nathaniel Prime (1768-1840) and his wife, Cornelia Sands (1773-1852). This was their country home which stood near the East River facing east over Hellgate and Long Island. It was situated between William Rhinelander's estate to the north and the Astor Mansion to the south. Slightly to the east was found the Gracie Mansion that still survives today. In today's terms, it was on the Upper East Side and occupied the block between First & York Avenues and 89th & 90th Streets....
zoom_in 2 images 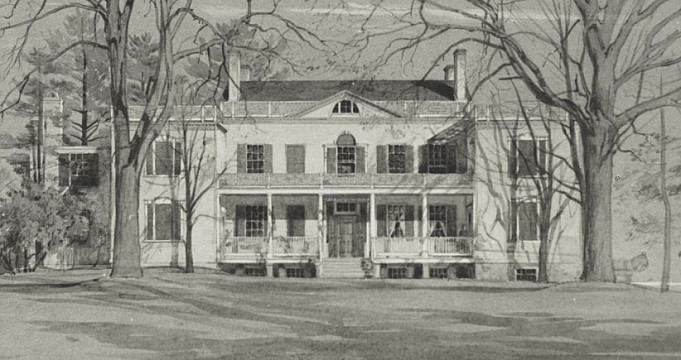 By 1830, Nathaniel Prime was named as one of New York's five millionaires along with his neighbor, John Jacob Astor, as well as John G. Coster, Stephen Whitney and Robert Lenox. The Primes purchased the land for their country home from the Waldron family who owned extensive farmland in the area. The estate was managed by Mr Hyslop and the gardens and greenhouses were particularly noted for their peaches, plums and grapes.

The former Mayor Philip Hone stayed here as a guest of the next generation of Primes in October, 1844. He wrote that, "the place has delightful clumps of fine old trees, clothed in the autumn foliage; the lawn is still green, the mild breezes, the rapid waters of Hellgate, all combine to make a picture of consummate beauty". In a less whimsical tone, he recalled that he slept in the same room in which Prime had taken his own life in 1840.

The watercolor of the house shown above was painted in 1854 by William Rickarby Miller and was commissioned by the Prime's second son, Rufus Prime, who lived at "Lane Cottage" on the estate before purchasing his own estate at Huntington on Long Island. It is assumed that the mansion stayed in the Prime family until circa 1890. By then, the area was no longer the rural idyll the Primes had enjoyed and so the mansion was sold, becoming the St. Joseph's Orphan Asylum by 1904. "The Old Prime Mansion" gradually fell into disrepair and was demolished in favor of urbanization in the summer of 1918.