Built in 1792, for William Bingham (1752-1804) and his wife Ann Willing (1764-1801). The Binghams lived at two of the showpiece houses of early Federal America - Bingham Mansion and Lansdowne Place - and they were also Rumson's first summer residents, setting a trend among fashionable society in Philadelphia and New York City which continues today. Also referred to as the "Bingham Place," their seaside residence became best associated with the Parmly family - pioneers of American Dental Surgery - who owned the property from 1833 to 1943. It was next owned by the "cut-throat" Boxing promoter Mike Jacobs who among others trained Joe Louis here. Having been remodelled several times since its original construction, it remains a private home....
zoom_in 2 images 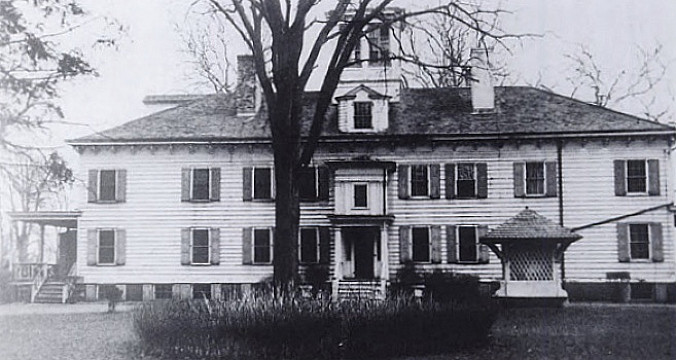 William Bingham was reputed to have become a millionaire by the age of twenty eight, and he and his beautiful wife were the undisputed arbiters of American fashionable society following the Revolution. They kept not one, but three mansions including this one: Bingham Mansion was their spectacular townhouse in Philadelphia; and, Lansdowne House was generally, "supposed to be the best country house in America".

In August, 1791, Bingham acquired a farmhouse set on about 200-acres at Rumson from Joseph Wardell whose family had held the property since 1665. Wardell's well-appointed farmhouse sat in the highest point of a promontory known as Black Point, near the mouth of the Shrewsbury River, commanding a magnificent view over the countryside, ocean, and Sandy Hook beyond. In today's terms, the land stretched roughly from Forrest Avenue across to Bingham Avenue.

In the same year that Bingham purchased the seaside property, his old friend from England, the former Prime Minister William Petty sent out his son, Lord Wycombe, to Philadelphia with, "architectural plans and gardening information for the Black Point estate". Building over the existing two-story farmhouse, Bingham completely redid its interior and added octagonal wings on either side, costing him, "considerably more than it was at first calculated". The works were overseen by one William Lloyd, who was afterwards employed year-round as the estate manager. Naming their summer home, "Bellevue" the Binghams spent their first summer here in 1792.

Enjoying "A Perfect State of Health"

Due to its remote position, Bingham aimed to make the estate entirely self-sufficient. He restocked the farm with a herd of "good cows" and built a new barn for poultry and pigs. He added a greenhouse, an ice house, a store room and a milk house, "so circumstanced as to preserve milk at least 48-hours". Aside from numerous perennials, he planted pear, peach, and plum trees around the house. In the grounds, he favored poplars and - "there cannot be too many" - locusts.

On the roof of the house was an observation platform. Bingham fitted it out with a barometer, thermometer, land telescope and lastly, "a spy glass of a good quality". This spy glass came with, "concave mirrors, which reflect the surrounding country, & where there is much diversity of appearance, have a happy effect in exhibiting prospects, concentered into a smaller compass."

In 1798, an outbreak of Yellow Fever in Philadelphia meant that Bellevue was chosen over Lansdowne House to host the wedding of their eldest daughter, Ann, to the English banker Alexander Baring (1774-1848), 1st Lord Ashburton. It was precisely because of those frequent epidemics that the Binghams had bought somewhere on the coast in he first place, and that same year Bingham wrote from Bellevue to Nicholas Low (1739-1826) in New York: "We have enjoyed a perfect State of Health, a cool Summer, a great deal of Exercise & Luxurious Living. We have had many Visits from our Friends... In Short, if my Pleasures had not been checked by contemplating the Sufferings of our devoted City, I might truly say that I never should have passed a more Agreeable Summer".

But, as healthy as it was here, it had become increasingly difficult for Bingham to immerse himself for the season (June to November) due to his official duties in Philadelphia. At that time, travelling from Philadelphia to Black Point was slow: Overland in 1792, it took the diarist Jacob Hiltzheimer, "from early morning of one day until after dinner of the second". When Bingham's beloved wife died in 1801 and he left for England where he died of a broken heart in 1804. As per his will, Bellevue etc. was held in trust for his three children and though it continued to be well-maintained over the proceeding years, it was rarely used.

The Parmlys of Bingham Hill

In 1814, John Hartshorne (1763-1849) purchased the 650-acre estate next to the Binghams on Black Point for $18,000. In 1830, he sold this to Dr Eleazar Parmly (1797-1874) while the following year the old Bingham place (still owned by the Bingham family) was transformed into "Bellevue Academy," a private boarding school for boys. But, in 1832, Parmly disposed of his estate to Seabury Tredwell (1780-1865) in favor of Bellevue (which by that time had grown to 275-acres) paying $8,000 to the Bingham's only son, William, who was then resident with his wife at the impressive Bingham Mansion in Montreal.

Getting Their Teeth Into It

Dr Parmly and his family were among the leading pioneers of the dental profession in America. He himself was the founder of the American Journal of Dental Science and the first Provost of the University of Maryland School of Dentistry. From 1833, the Parmlys used the house as their summer home but after the death of Eleazar's wife, Anna Maria Valk Smith (1802-1857), he lived there almost year-round.

It was at about this time that the Parmlys and those local to Rumson began to refer to the house as "Bingham Hill" and/or "the Bingham Place". After Eleazar died in 1874, the property was left to his only surviving son, Dr Ehrick Parmly (1830-1907). Ehrick kept a herd of 40-Jersey cows here and both remodelled and enlarged the house which was then described in the Monmouth Democrat in 1883,

The house is situated on a hill surrounded by several acres of beautifully laid-out lawns, well-shaded with an abundance of fine shade trees; the house is 89 feet by 40, with porches on three sides 12-feet wide… Over the barn the doctor has erected a large cylindrical windmill of about 15-horsepower by which means he is enabled to prepare the feed for his stock..

Having continued the family dental practice in New York City, Ehrick retired in 1886 to live year-round here with his French wife, Lucy Dubois. By then there were eight other houses on their 300-acre estate which went on the market after his death in 1907. There were no buyers until 1911 when Ehrick's son, Dalton, bought out his elder brothers.

Dalton had been involved in the iron and steel industry, but on returning to Rumson he used the land to become a real-estate developer, as well as creating the Parmly Park section of Oceanic. Living here with his wife, Lillian E. Briggs, he sold off much of the estate, maintaining only the mansion and 62-acres, including the farm and outbuildings.

Dalton died in 1938. Five years later, his son, John, sold Bingham Hill to Michael Strauss Jacobs, a "cut-throat" New York boxing promotor and member of the International Boxing Hall of Fame who later became something of, "a local real estate activist". Mike Jacobs referred to his country estate as Bingham Hill Farm and transformed the top floor into a gym to train many of his prizefighters, notably the great Joe Louis.

Today the property has been reduced to 6.5-acres but it still stands at Bingham Avenue. It has been refurbished both inside and out, and remains a private home.

Teeth: The Story of Beauty, Inequality, and the Struggle for Oral Health in America By Mary Otto

Jacobs Beach: The Mob, the Garden and the Golden Age of Boxing By Kevin Mitchell