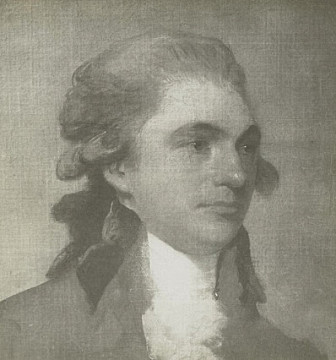 He was born in Philadelphia and graduated from the College of Philadelphia (M.A., 1771) before serving his apprenticeship with Thomas Wharton and then joining Willing, Morris & Co. In 1771, he was appointed Consul to Martinique and during the Revolution he officiated as the agent of the Continental Congress in the West Indies. Notably through privateering, he was reputed to be a millionaire by the time he returned to Philadelphia at the age of thirty. He invested in land and bought a million acres in Pennsylvania, 2.5-million acres in Maine, and considerable property in upstate New York where Binghampton is named for him. In 1781, he founded the Pennsylvania Bank which later became the Bank of North America for which he wrote the by-laws.

In 1803, he and his son-in-law, Lord Baring, brokered the Louisiana Purchase from Napoleon. In politics, he was Speaker for the Pennsylvania House of Representatives before becoming a Senator in 1795. In 1797, he was President pro tempore of the United States Senate. William and his wife, Nancy Willing, were the undisputed power couple of American Revolutionary society and he was reputed to be America's first millionaire. In 1813, John Quincy Adams admitted that Washington's Presidency, the Capital, and the Country had all been governed by Bingham and his family connections.

The Golden Voyage: The Life and Times of William Bingham, 1752-1804 By Robert C. Alberts

Merchants of War: Barings Bank and William Bingham, Revolutionary Bankers from the War of Independence to the Louisiana Purchase By David J. Tearle