Built in 1737 for Andrew Hamilton (1676-1741), Pennsylvania's greatest lawyer and the confidante of William Penn (1679-1720). His mansion stood on the hill just behind what is now the Free Library of Philadelphia and his estate spread from Vine Street to Fairmont Avenue, between 12th and 19th Street. His mansion was later briefly home to then vice-president (and later president) John Adams (1735-1826) - whose wife called it "delicious" - but it always remained the property of the Hamilton family right up until it was demolished for development in 1875....
zoom_in 2 images 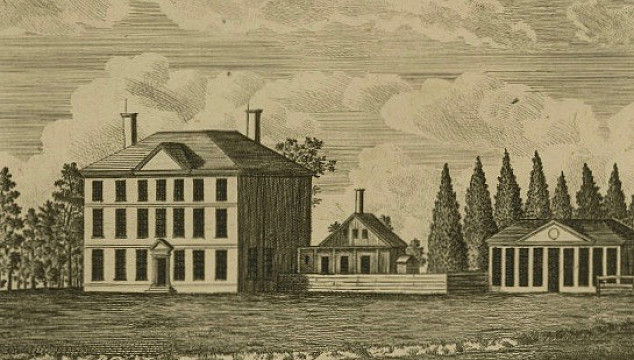 Andrew Hamilton I, "The Councillor" of Philadelphia

In 1726, on the advice of James Logan (1674-1751) for legal services rendered, Hannah Callowhill (1671-1726), the widow of the founder of Pennsylvania, gifted Hamilton a 150-acre estate that had formerly been part of the Manor of Springettsbury.

In 1737, Hamilton's "noble" south-facing, three-story brick mansion measured 54 feet across and was built on the highest rise of the estate, complete with numerous outbuildings that included stables, a coach house, ice house and a separate kitchen wing. A portrait of the family's benefactor, Mrs Hannah Penn, hung in the hall, but Hamilton died just four years later and was buried on the estate he had named Bush Hill. Among other property - that amounted to some 10,000-acres - he left his home to his eldest son, James Hamilton (1710-1783), the only native born Governor of Colonial Pennsylvania.

In 1749, having returned from a three year sojourn in London, James made several additions and improvements to the mansion, as well as erectiing a greenhouse. A connoisseur of fine art, it was at Bush Hill that James assembled Pennsylvania's first notable art collection, and he gained a considerable reputation for the frequency of the lavish and large scale parties he held there. During the American Revolution, he declared himself a Loyalist and went with the British to New York, where he died. In 1777, British soldiers camped on the grounds and cut down all the trees in front of the house, leaving it quite bare.

James had died in 1783 and left the estate to his nephew, William Hamilton (1745-1813), who soon afterwards embarked on a two year trip to Europe. When William returned to Philadelphia, he briefly lived at Bush Hill and it was on returning there with his niece one summer's night in 1787 that his carriage was set and shot upon by six robbers who were chased into a cornfield by his servants on horseback. During this time William was building his own famously sumptuous residence, The Woodlands that he moved into in 1789, leaving Bush Hill empty once more.

Bush Hill had become a prominent landmark in Philadelphia when Hamilton allowed it's front lawns to be used as the parade terminus of the Federal Procession of July 4th, 1788, where celebrations were held to mark the establishment of the new U.S. Constitution. The front lawn on which crowds of over two thousand people had gathered that day was given the name 'Union Green'. Perhaps fittingly, when the Federal government came to Philadelphia in 1790, Hamilton rented Bush Hill to the then vice-president, John Adams (1735–1826), of Peacefield, who would afterwards serve as the 2nd President of the United States.

Renovations were made to the house in preparation for the new tenants, and at this time it was described as "a very beautiful place" where sheep pastured on the lawn in front of the house. Behind the house was a grove of evergreens laid out in an ordered grid, where a stream flowed down to the woodland and formal gardens below. Adams' wife, Abigail Smith (1744-1818), was assured that for eight months of the year, "this place was delicious," but having "consumed forty cords of wood in four months" during a particularly arduous winter, in 1791 she wrote to her sister, Elizabeth Smith (1750-1815):

I am told that this spot is very delightful as a summer residence. The house is spacious. The views from it are rather beautiful than sublime; the country round has too much of the level to be in my style; the appearance of uniformity wearies the eye, and confines the imagination. We have a fine view of the whole city from our windows; a beautiful grove behind the house, through which there is a spacious gravel walk, guarded by a number of marble statues, whose genealogy I have not yet studied, as the last week is the first time I have visited them.

George Washington (1732-1799) of Mount Vernon and Benjamin Franklin (1706-1790) were among the long list of distinguished visitors who frequently visited, just as they had done when it was the home of James Hamilton. But, after only a year, despite being just two-and-a-half miles from the city center, the long winter and bad roads led to the Adams' moving into Philadelphia where they rented a townhouse for $1,000 a year. They left in the spring of 1791, when Abigail reflected, "I shall have some regrets leaving this place, just as the season begins to open all it's beauties upon me".

Once again, the grand edifice stood empty, but in 1793 it was commandeered by the city to serve as a hospital for the victims of the yellow fever epidemic that was then sweeping across Philadelphia. The house that only just before had hosted the country's leading dignitaries within it's elegant walls now became, "a dread charnel house of fear, dismal suffering and death".

The house continued to sink into decline and by 1835 much of the estate had been sold off by Hamilton's heirs - the largest tract having been purchased by Oliver Parry (1794-1874) and his nephew Nathaniel Randolph (1817-1858). The area became increasingly industrialized and a brick factory and the Bush Hill Ironworks were erected on the former gardens. In subsequent years, the Hamilton family converted the mansion into a tavern and resort before it was finally demolished in 1875 to make way for new residences.