Completed in 1789, for the bachelor William Hamilton (1745-1813). His mansion is considered to be one of the finest examples of neo-classical architecture in the United States. Bingham Mansion was the first townhouse in America to be completed in the style of the famous Robert Adam, but this was the first country seat. In Hamilton's time, the gardens contained a collection of some 10,000-plants and 1,000-trees - the largest varietal garden then in the States - and many of these specimens can still be found here today. From 1840, the mansion has been preserved and is available for tours and events. The grounds are now better recognized as "The Woodlands Cemetery"....
zoom_in 4 images 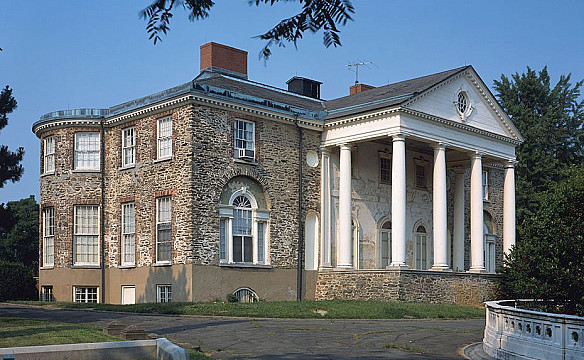 Andrew Hamilton I, "The Councillor" of Philadelphia

In 1729, William's distinguished grandfather, Andrew Hamilton (1676-1741), of Bush Hill, was gifted a 250-acre estate in Philadelphia County, Pennsylvania, for legal services rendered to the proprietorial Penn family. On his death in 1741, among other property, he left this particular estate to the younger of his two sons, Andrew Hamilton (1712-1747), who increased its landholdings and built a comfortable mansion here. Andrew died only six years later at which time he willed this "Plantation on the West side of the Schuylkill, containing about 356-acres," to his younger son, William Hamilton (1745-1813), who was then just two years old. In 1783, William's uncle, Governor James Hamilton (1710-1783), left him an adjoining tract of 179-acres that increased the Woodlands estate to 535-acres.

Seeking the Best in Contemporary Influence

William Hamilton was a Tory and sided with the British during the American Revolutionary War. He was lucky to have held on to his estates having twice stood trial for treason before being briefly imprisoned in 1783. Following his release, in 1784 he embarked on a two year trip to Europe with his favorite niece, Ann Hamilton. While in England, William was able to continue his private studies into landscape design and contemporary British architecture then being pioneered by Robert Adam (1728-1792).

Guided by his and his uncle's mutual friend, Benjamin West (1738-1820), Hamilton made use of his time, "viewing the best houses... I have scarcely omitted visiting any thing that I have heard of as worthy of notice". Having seen various architects, he returned to Philadelphia in 1788 and taking up residence at Bush Hill he demolished his father's old home to make way for his own new grand design that he named "The Woodlands".

"One of the Most Superb Water Scenes that Can be Imagined"

In 1789, William's country seat was completed on the southwest corner of his estate, situated on the high rolling ground that gave sweeping views over the winding Schuylkill River and Gray's Ferry Bridge. According to the artist William Russell Birch (1755-1834) The Woodlands, "commands one of the most superb water scenes that can be imagined".

Planned, "with a great deal of taste," the two-story, 16-room mansion covering 7,100- square feet of living space was built of local stone and entirely plastered in white stucco (visibly lacking today). The outbuildings included a hot house, greenhouse, seed house, tea house, ice house, coach house, stables, and two imposing gate lodges occupied by the porters either side of the main entrance gates. The lodges were thought to have been built by Henry Ashley Keeble who designed those at Lansdowne House in a similar style.

The perfectly symmetrical house is approached via the north front with its six Ionic pilasters and ornamented pediment. Entry is made into the vestibule/reception hall crown by a domed ceiling that gives immediate access to the three principal reception rooms and staircase on a center hall plan: to the left is the oval dining room; to the right the oval drawing room (both with floor-to-ceiling Palladian bay windows); and, directly ahead of the hall is the ballroom/grand salon with opposite apsidal ends, one containing a marble statue of Antinous and the other a bronze of Apollo in pursuit of Daphne.

To the left of the ballroom is the library that leads directly back on to the oval dining room and to the right is the study that leads back in the same way to the oval parlor. The south side of the ballroom opens up onto the terrace of the Doric portico with four columns supporting a pediment and views over the lawns and down to the Schuylkill, cleverly reflected in the French windows (glass doors) that separate indoors from out.

In 1797, Julian Ursyn Niemcewicz (1758-1841) visited Hamilton's home and declared it to be Philadelphia's equivalent to the Villa Borghese in Rome: "Its situation is one of the most beautiful that one could see... Arranged and decorated in a style rare in America; there are pictures, medallions, bronzes etc. walls are decorated with the works of several of the ancient painters from the Italian, Dutch and Flemish schools, many of which are of great merit". William Hamilton took a deep interest in art and his valuable collection was acquired with the help of his friend, the previously mentioned Benjamin West (1738-1820), who was well placed to give such advice having served as the President of the Royal Academy of Arts in London from 1792 to 1820.

His furniture included many fine pieces from England and France, and in these elegant surroundings he entertained the most prominent members of American society. In 1806, Thomas Jefferson, who was then still completing Monticello, gave high praise to Hamilton's home when he concluded that, "with its collections, its tastes and its style (it is) the only rival I have known in America to what may be seen in England."

But, it wasn't only the house that drew admiration: Hamilton was an avid horticulturalist and botanist, and he also became a self-taught expert in landscape design. Later, this led America's pre-eminent landscape designer, Andrew Jackson Downing (1815-1852), to recall that Hamilton's gardens and those at Gore Place were, "the two best specimens of the modern style... in the earliest period of Landscape Gardening among us (ie., in America".

His extensive gardens contained what was then the largest and most eclectic collection of plants, fruits, flowers and trees, both native and exotic, collected from all corners of the world. Hamilton busied himself collecting and exchanging a wide variety of native plants from friends and neighbors, seeing his collection grow to some 10,000 specimens.

The arboretum contained over 1,000 trees and Hamilton is credited for introducing to America the Gingko, Lombardy Poplar, Ailanthus, Paper Mulberry, Caucasian Zelkova, Norway Maple, Sycamore Maple, and Camellia. Therefore, it was perhaps no surprise that in 1806, with the approval of Jefferson, the American Philosophical Society passed a resolution to send the Fort Mandan seeds (including those of the Osage Orange) collected from the Lewis and Clark Expedition to be nurtured in Hamilton's gardens.

William never married, but until her death in 1803 he lived at the mansion with his widowed mother. In 1805, he developed the northern portion of his estate creating the first modern suburb of Philadelphia and donating the land on which St. Mary's Church still stands. He named his development "Hamilton Village" and the well-known streets he laid out were named for various members of his family, though they have since been renamed: Till Street (40th Street); James Street (Chestnut Street); Andrew Street (Walnut Street); Moore Street (34th Street); Margaret Street (36th Street); and Mary Street (38th Street).

William died in 1813 leaving his estate to his nephew, James Hamilton (1774-1817), who died unmarried just four years late. James bequeathed The Woodlands to his two unmarried sisters, Margaret Hamilton (1768-1828) and Mary Hamilton (1771-1849). For a time, the sisters were joined in the house by their widowed brother-in-law, James Lyle (1765-1826), and his two daughters, Ellen Lyle (1797-1852) and Mary Lyle (1796-1829). Despite having sold off the majority of the estate and much of the furniture, Mary still struggled to maintain it and the house and grounds began to fall into disrepair.

By 1840, the house and its remaining 78-acres were sold and became the "The Woodlands Cemetery" providing burial space for the city's burdening populace. From 1843, the house was used as the cemetery's headquarters. In the 1970s, the cemetery allowed the University City Historical Society to store furniture here that had been taken from other old houses in the area. Not before long, grants of $300,000 were received and a major restoration was undertaken before it was opened to the public in 1987 as a rental facility for social and corporate events. It remains open during certain times of the year for tours.

Today, the cemetery is run with The Woodlands Trust for Historic Preservation as a non-profit organization dedicated to the preservation and promotion of the burial ground, mansion and arboretum as a cultural landscape between the University of Pennsylvania and the University of the Sciences. Many of the trees grown by Hamilton can still be seen and a number of connecting paths wind throughout the space for pedestrians and cyclists alike. There is also a community garden and apiary, and all of this is open to the public for free daily, from dawn to dusk. In 1967, the house was declared a National Historic Landmark and added to the National Register of Historic Places. In 2006, the mansion, cemetery and original outbuildings were named a National Historic Landmark District.

Benjamin West and the Struggle to be Modern By Loyd Grossman