Completed in 1917, for C. Ledyard Blair (1867-1949) and his first wife, Florence Osborne Jennings (1869-1931). Their 66-room, Beaux-Arts mansion took four years to build and occupied a footprint of roughly 7,300-square feet on the south corner of 70th Street and Fifth Avenue, on the site of Josiah M. Fiske's old mansion. It had a modest frontage of 33.5-feet on Fifth Avenue, but that was a mere fraction of its 175-foot facade on 70th Street that overlooked the gardens of the Frick Mansion. Both the Frick and Blair houses were designed by the architects Carrère & Hastings, who Blair had previously used to build Blairsden. In January, 1926, after just nine years here, Blair pre-empted the demise of Fifth Avenue and sold up to developer Anthony Campagna for $1.25 million - then the highest price ever paid per square foot for a development....
zoom_in 5 images 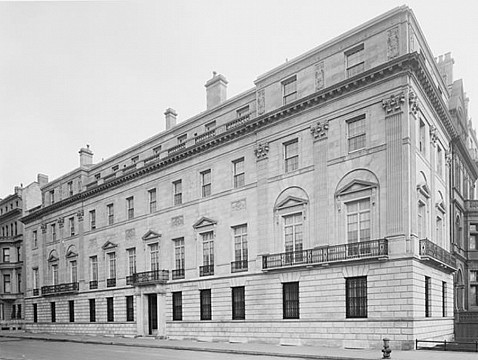 C. Ledyard Blair was the grandson of the man who built the first four railroads out of Chicago, founded Blairstown in New Jersey, and died in 1899 with a fortune of $70 million. Along with a sizeable trust fund (he was given $7 million as a coming-of-age present while at Princeton), Ledyard inherited his grandfather's nose for business. Whereas his brother, Insley, avoided finance and collected art, Ledyard co-founded an investment bank, Blair & Co., and was later elected Governor of the New York Stock Exchange.

In 1901, Josiah Fiske's widow, Martha, had remarried one of her husband's former employees - a man twenty years her junior! In 1910, two years after she died, both her townhouse at 884 Fifth Avenue and her summer home in Newport, Honeysuckle Lodge, were put on the market. As coincidence would have it, C. Ledyard Blair inadvertently ended up in possession of both. In 1912, "a prominent western capitalist" bagged the iconic Fiske mansion on Fifth Avenue for $750,000, a quarter of a million dollars less than the asking price owing to it having sat on the market for two years. The news in the morning was that the new owner was going to build himself a new home here, but by afternoon the mystery buyer had flipped it on - for a profit - to C. Ledyard Blair.

The 66-room Blair House that stood four stories over a basement was in the fashionable district of Lenox Hill. The facade was built of limestone, relieved with Ionic columns and low wrought iron balconies outside the windows of the second floor. In 1915, The New York Times applauded it as, "an excellent example of good architectural taste, combined with the luxuries and comfort of a Fifth Avenue home". It stood for barely a decade.

Campagna knocked down the Blair Mansion in 1927, just as Mrs Florence Twombly began construction of her Beaux-Arts mansion next door - it never got a chance to stand alongside the Blair House. Campagna's new 11-story apartment block - the same block that still stands at 2 East Seventieth Street today - was designed by Rosario Candela and the firm of Walker & Gillette. By the time it was finished in 1928 - permanently denying the Frick garden of its southern light - the Blairs had started work on Deepdene.

Fifth Avenue, 1911, from Start to Finish in Historic Block-by-Block Photographs By Christopher Gray