Built in 1886, for Josiah M. Fiske (1822-1892), "the great flour merchant of New York City" and his wife, Martha T. Smith (1828-1908). They purchased the land from the Callender estate of George Griswold Haven (1837-1908) and employed the architects Peabody & Stearns to build their "handsome" summer home while Frederick Law Olmstead landscaped the surrounding gardens. They named their new home "Masonlea," perhaps as a nod to Josiah's maternal family, the Masons. The childless Mrs Fiske outlived her husband and then remarried one of his former employees, George W. Collord (1849-1914), a man 20-years her junior! She died while travelling in Egypt and the following year (1909) Masonlea was purchased by T. Suffern Tailer (1866-1928)....
zoom_in 1 images 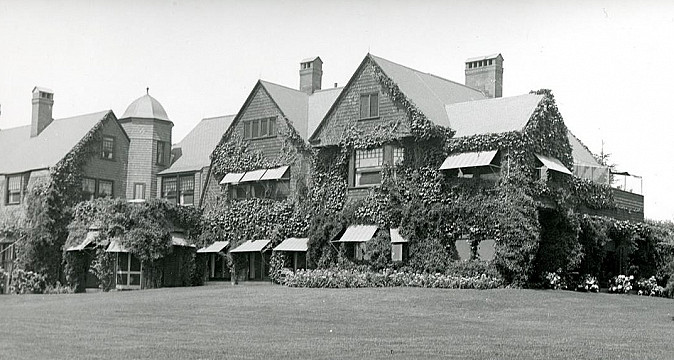 T. Suffern Tailer was the golf-loving son of one of Ward McAllister's cronies. His first wife, Maude, was the youngest daughter of Pierre Lorillard IV but she ditched him in 1902 in favor of his former business partner, Cecil Baring, 3rd Baron Revelstoke. In 1909, Tailer's ego was restored when he married a beauty from Baltimore 10-years younger than his first wife, Harriet Stewart Brown, and he bought her Masonlea as a wedding present.

The Tailers "transformed" the house into "one of the show places" of Newport and renamed it "Honeysuckle Lodge". In the summer of 1910, they opened the house to society and greeted their guests in the newly redecorated Louis XVI hall. Tailer died in 1928, and seven years later Harriet was remarried to the also widowed C. Ledyard Blair (1867-1949). She didn't care for his home in Bermuda, Deepdene, so they divided their time between Blairsden in New Jersey, her apartment at 740 Park Avenue, and Honeysuckle Lodge.

Ledyard Blair died in February, 1949, but that didn't stop Harriet from holding a wedding reception at Honeysuckle Lodge the following month for her grand-daughter, Harriet. Mrs Blair died four years later (1953) and left her "Ocean Links" property to her son, Thomas, and Honeysuckle Lodge, to her daughter, Mrs Betty Dyer. Betty lived at "Farmlands" with her husband, W. Gurnee Dyer, and opted to take $64,000 in securities over the house.

As Mrs Blair's son had also opted against taking "Ocean Links," the properties were sold and were briefly combined to become the campus of the Honeysuckle School for Girls. The school did not last and sometime before 1964, Honeysuckle once again became a summer home when it was purchased by David Van Pelt (1887-1972) and his wife, Elizabeth McCune Patterson (1898-1969). Tragically, they had lost their only child, Charles, when he was shot dead in 1952. He was hiking with a friend when they were mistaken for robbers. The Van Pelt Library of the University of Pennsylvania is named in his honor.

Found today on Newport's famed Cliff Walk, just south of The Breakers and north of Rosecliff, Honeysuckle is currently on the market (March, 2020) for a cool $10.9 million. It covers 10,530 square feet of living space and 10 bedrooms with 11 bathrooms. It overlooks the ocean on 2-acres of grounds which include a swimming pool and a separate 4,000 square foot carriage house with two apartments, a greenhouse and garage.

The Shingle Style and the Stick Style: Architectural Theory and Design from Downing to the Origins of Wright By Vincent Scully Jr.