Rebuilt perhaps from 1873, for Charles Anderson Dana (1819-1897) and his wife, Eunice MacDaniel (1824-1903). In Latin, 'Dosoris' translates to 'Wife's Dowry,' so named by the Rev. Benjamin Woolsey for the house he built here in 1745 on the 46-acre island (West Island) that became his when he married Abigail Taylor. In 1873, West Island was acquired by Charles A. Dana, editor and co-owner of The New York Sun, and under him Dosoris became, "probably Long Island's most famous country place"....
zoom_in 1 images 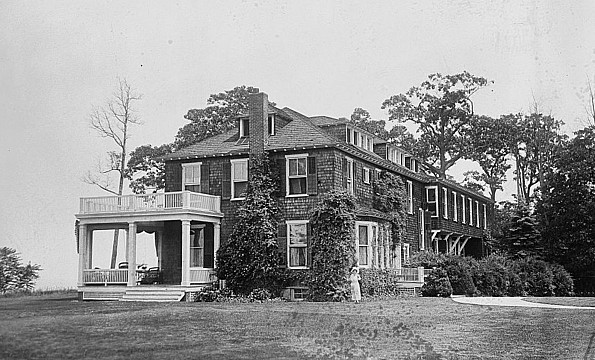 Having joined the staff of the New York Tribune in 1847, two years later Charles A. Dana was its owner and managing editor and under him it championed the anti-slavery movement. During the Civil War, he was appointed to the War Office as Lincoln's "eyes of the administration," but from 1868 became the part-owner and editor of The New York Sun that under his management became a Democratic and outspoken tool for change. In addition to Dosoris, he built a mansion in New York City at Madison Avenue and 60th Street which he furnished with paintings, tapestries and Chinese porcelains. Aside from horticulture, he was deeply interested in poetry and history of art, and in relation to his treasured collection of Chinese porcelains, he proudly boasted: "They are not in the British Museum; they are not in the Louvre; and they are conspicuously absent at Dresden".

Dana personally oversaw the transformation of West Island into a, "world-renowned arboretum," with rare trees from America, Europe and Asia. Aside from bringing in America's pre-eminent landscape designer, Frederick Law Olmsted, to lay out a network of winding paths through which to enjoy this "fairyland of trees and flowers," Dana also brought in a specialist to live here year round whose job it was to acclimatize the foreign species. He welcomed arboriculturists from all over the country to study and admire what he planted here, including such unlikely and romantic specimens as the oaks grown from acorns found on the tomb of the ancient Chinese philosopher, Confucius.

The bucolic 'island' - that is all but an island except for a narrow causeway connecting it to the mainland - is comprised of 46-acres with a 28-acre pond. A contemporary write-up from 1889 described, "a seawall is built all around the island, and it is draped and festooned with Matrimony vine, our native Bitter-sweet, a Japanese species of the same genus, and Periploca Graeca, which are planted on top". Dana may have lived in the original house built by the Woolseys back in 1745, as his residence here was described as the, "large, old-fashioned frame house, in which he made his country home". He died in 1897 and in 1905 his only son, Paul Dana (a member of Mrs Astor's hallowed "400"), divided the island into two properties. He kept the larger part for himself (31-acres) and sold off what remained (the 15-acres which included his father's old frame house) to William Lamon Harkness, of Cleveland, one of the heirs to the Standard Oil fortune.

After the sale and division in 1907, one of the servitors that, "Mr Harkness had told them he would pull down all the old buildings except the house, and erect a new stable and garage, (and) that he would remodel the house during the coming winter and have it ready to live in next summer". Harkness also added new walks and drives, sodding over some of the old ones, and in 1913 he contracted James Gamble Rogers to remodel the old house into the "handsome" residence seen in the picture above that he named "The Wings".

Harkness died in 1919, leaving $53-million to his widow and two children. By the time his widow died in 1947, despite all expenditure, her portion of his fortune had grown to just under a whopping $69-million. The Wings was rented out that summer to the Argentine Ambassador to the United States, Oscar Ivanissevich. But shortly afterwards the Dosoris estate was purchased by their one and only neighbor, Junius S. Morgan III, who in 1928 had snapped up Paul Dana's half of the island and built Salutation. In about 1948, Mrs Morgan  demolished it to make way for a Colonial-Revival style guesthouse in its place.