Built from 1765, for Johannes Georg Hocker (1733-1820). The picturesque mansion on this farm was redesigned by Horace Trumbauer in the early 20th century and is visible from the road between Stenton Avenue and Chestnut Hill. Erdenheim Farm is still operational today and since 1861 it has been associated with an exceptionally high number of America's best-known racehorses under Aristides Welch, the Kittsons and the Widener family of nearby Lynnewood Hall in Elkins Park....
zoom_in 3 images 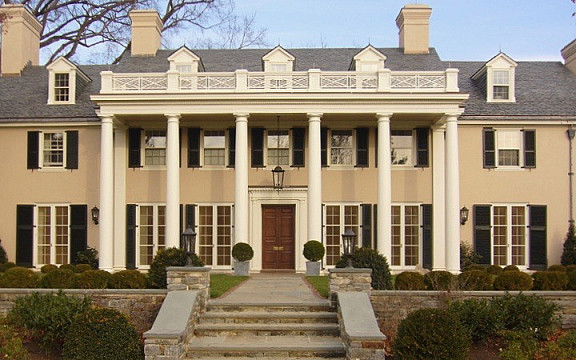 Hocker purchased the farm with its 200-acres for £1,600 and named the house he built there "Erdenheim" which in his native German translates to "earthly home". It was a long, stone structure covered in stucco with columns along the front. A wing was later added and it is presumed to have remained in the Hocker family until 1861.

In 1861, Erdenheim was purchased by Aristides Welch (1811-1890) and his wife Rachel Henrietta Jackson Armstrong (1832-1870). Welch was formerly a purser in the United States Navy who resigned in 1856 and turned his hand to breeding thoroughbred racehorses, in which he had considerable success. By the time he died he was considered,  to be "probably the most astute breeder of blooded horse stock in the United States".

Aristides and Henrietta Welch lived at Erdeneheim for just over twenty years. According to The New York Times, under Welch, Erdenheim became, "celebrated all over the country as the birthplace of the most noted horses ever on the turf ". One of his horses won the inaugural Kentucky Derby and another was the internationally-acclaimed Iroquois, that he sold to Pierre Lorillard IV. Iroquois was the first American-bred horse to win the Epsom Derby, and a further five British championships in 1881. Over the years, Welch enlarged Erdenheim's holdings to 280-acres, but having outlived his wife he retired to Philadelphia.

In 1882, Welch sold Erdeneheim and 80 of its horses for $100,000 to Commodore Norman Wolfred Kittson (1814-1888) and his son, James. Norman Kittson had made his fortune in fur, steamships and rail in Minnesota, and under the management of the his eldest son, Louis Kittson, the stud farm continued its winning traditions. The Kittsons built a picturesque stone bridge over a stream, enlarged the property to 450-acres and laid out two outdoor tracks and one indoor track for training their horses. The mile-long outside track racing track was described as, "one of the best tracks (in the country and) level as a billiard table". In 1890, two years after the Commodore's death, Louis bought out his elder brother and continued their horse-racing operations here.

In 1896, Louis Kittson sold Erdenheim for $100,000 to Robert Niedermark Carson (1844-1907) who maintained it more along the lines of a country estate rather than a stock farm, dividing his time between here, their apartment in Philadelphia, and Reef Point in Newport. He and his wife, "Fannie" Flickinger, made alterations to the old Hocker farmhouse, redesigning it as a "rustic" summer house. On his death, he left 100-acres of the estate, with an endowment fund of $5 million to build what is today known as the "Carson Valley School".

The Wideners & Dixons - Back to Horses & a 60-Room Mansion

In 1912, Mrs Carson's heirs sold Erdenheim to George Dunton Widener, Jr. (1889-1971), the grandson of the builder of Lynnewood Hall. In Widener, Erdenheim was once again in the possession of a passionate and successful thoroughbred owner and breeder who served as President of the National Museum of Racing and the Hall of Fame. George was introduced to the world of racing by his uncle, Joseph Early Widener (1871-1943), President of the Belmont Park Racetrack and the Hialeah Racetrack. Tragically, in the same year that Widener bought Erdenheim, he lost his father and brother on board the Titanic.

Dixon inherited the 500-acre property in 1971. He continued to breed thoroughbreds on the farm and many of his horses competed in show jumping events and dressage. He also kept a herd of Aberdeen Angus cattle and a flock of Border Cheviot sheep. Since 2001, the Dixon estate has been drastically subdivided and in some cases developed. However, Erdenheim Farm itself has been preserved and is still operational today.

On the Waters of the Wissahickon: A History of Erdenheim Farm By Eric Plaag

The Greatest Gambling Story Ever Told: A True Tale of Three Gamblers, The Kentucky Derby, and the Mexican Cartel By Mark Paul

The Great Sweepstakes of 1877: A True Story of Southern Grit, Gilded Age Tycoons, and a Race That Galvanized the Nation By Mark Shrager