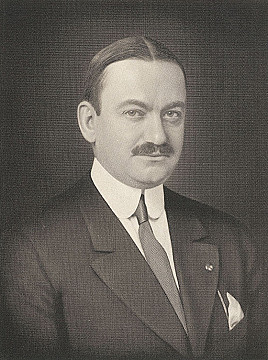 He was born at Philadelphia, but unlike every other architect of his caliber in his era, he was neither from a distinguished family nor a wealthy one. He dropped out of school at sixteen and his lack of education - notably that he did attend the École des Beaux-Arts in Paris like all his Gilded Age contemporaries - gave him an inferiority complex for life. Having completed a 5-year apprenticeship with G.W. & W.D. Hewitt of Philadelphia, he started out on his own account in 1889 when he was just 21-years old. His first major commission came in 1893 when William Welsh Harrison asked him to design Grey Towers Castle. Three years later, Harrison introduced him to P.A.B. Widener for whom he built Lynnewood Hall and his career never looked back. He trained up Julian Abele - the first professional African-American architect - as his chief designer and first tasked him to translate Sanson's plans for the Perry Belmont House.

Aside from his private commissions he was noted for his public works too which included the Philadelphia Museum of Art, the Free Library of Philadelphia, many of the buildings at Duke University, and Harvard's Harry Elkins Widener Memorial Library. Trumbauer is now remembered as one of the greatest architects of his era, particularly in regards to the Beaux-Arts, but he didn't believe in his own ability and he was shamefully neglected by his peers - he never received any medals of achievement from the American Institute of Architects. Despite all his success, Trumbauer remained deeply shy, devoid of self-confidence, and avoided having his picture taken wherever possible. His drinking worsened after the death of his wife in 1935 and 3-years later he died cirrhosis of the liver.

Surprisingly, at his death he left an estate valued at just $10,000, which was alot of money but only a fraction of what he would have earned. His stepdaughter (who was like a daughter to him) recalled that he was a gambler both on the Stock Market and at the card table and it is assumed that he lost considerably with the Wall Street Crash. Since 2016, the Trumbauer Awards have been awarded annually by the Philadelphia Chapter of the Institute of Classical Architecture & Art: “Horace Trumbauer’s work celebrates the comprehensive vocabulary of classical and traditional architecture by exploring beauty in numerous aesthetic styles. In developing the Trumbauer Awards, we honor contemporary practitioners whose work displays the same spirit of invention and expression.”