Completed in 1917, for James J. Van Alen (1846-1923), the widowed lothario and dedicated Anglophile known as "the American Prince of Wales". The architect responsible for bringing it to life was Harry Allan Jacobs (1872-1932), a New Yorker who won the Prix de Rome that enabled him to study at the École des Beaux-Arts in Paris before becoming well-known for his residential architecture on the Upper East Side. However, the original design was not his: except for some minor, practical differences the house is a near-identical copy of the rear facade of 20 St. James' Square in London. Completed by Robert Adam in 1775, it was one of the Queen Mother's childhood homes and is now known as Distiller's House. Van Alen sold his townhouse to Rufus Lenoir Patterson Jr. and it remained a private home up until 1945. His widow's generosity allowed it to become the Kosciuscko Foundation House, which remains dedicated to promoting "educational and cultural exchanges between the United States and Poland"....
zoom_in 6 images 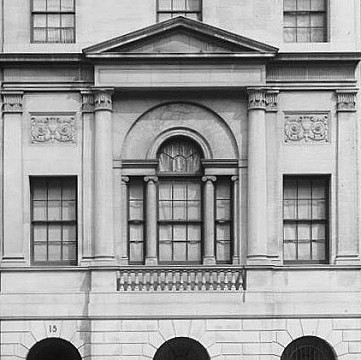 The Van Alen House in New York was not the only house to bear a similarity to 20 St. James Square: Boodles, one of London's most fashionable gentleman's clubs has been located at 28 St. James Street since it was founded by the Earl of Shelburne in 1783. It was built in 1775 by James Crunden who may well have taken inspiration from Adam's then newly completed 20 St. James Square, just around the corner. Van Alen was not a member of Boodles, but this part of London was well-known to him and it wouldn't have been extraordinary if he'd been a guest at 20 St. James Square that between 1908 and 1920 was the townhouse of the Queen Mother's father, the 14th Earl of Strathmore.

"The American Prince of Wales"

James Van Alen was a conspicuous eccentric. Although a Knickerbocker connected to many of New York's most influential old Dutch families, he'd spent much of his childhood in England with his cousins, the Grinnells. His father (an equally passionate Anglophile) packed him off to Oxford and it was there that he perfected the role he enjoyed playing most: the English gentleman in America. Van Alen capitalized on his physical resemblance to the English Prince of Wales and among other affectations took care to trim his beard in an identical manner to the future King. But, more than that, he sported a monocle, favored English expressions, and frequently peppered his speech with quotes from Shakespeare.

His wealth of course allowed him to carry off what might otherwise have been seen as madness! He was rich as Croesus, predominantly through a savvy investment made by his father in the Illinois Central Railroad, and this was amply topped up by a provision left to him by his late wife, Emily Astor, the eldest daughter of William and "The Mrs Astor".

Van Alen entertained at Wakehurst from June to September and before the First World War he divided the rest of his year principally between his vast 15th Century pile in England, Rushton Hall, and on France's fashionable Côte d'Azur where in 1920 he purchased the Villa Mont-Joli (formerly known as Villa Allerton).

As war raged across Europe from 1914, crossing the Atlantic was not advised except for essential travel. Now in need of a new winter home, Van Alen brought a slice of the England he so desperately missed to New York. In April, 1916, he purchased 15 East 65th Street from Mrs Chisholm who for several years previously had run an exclusive girl's school from that address. Van Alen promptly demolished the existing building and employed Harry Allan Jacobs to bring alive part of the London for which he yearned.

The stately limestone house - noted for its oval entrance hall and high ceilings - sits on a plot of 31-by-100 feet and construction costs ran to $65,000. From the street, the house gives the impression of having 3-stories but it also includes a fourth floor set slightly back from the main facade and a basement, both of which were for staff. The facade is dominated by the Palladian window framed by Corinthian pilasters under a pediment: an identical copy of that at 20 St. James' Square and similar to that at Boodles.

Prohibition came into force in the States from October, 1919. Disgusted by what he called America's "lack of liberty," in December, 1919, Van Alen sold his two-year old townhouse for $275,000 and in February, 1920, quit America in favor of his homes in Europe.

But, if alcohol was no longer allowed in the States, tobacco most certainly was, which was good news for the new owner of 15 East 65th: Rufus Lenoir Patterson Jr. was then Vice-President of the American Tobacco Company and the founder of the American Machine & Foundry Company that made equipment to roll and pack cigarettes and cigars. By 1935,  Rufus Lenoir Patterson was, "one of the eight highest-paid executives in the country". Both he and his wife, Margaret Warren Morehead, came from prominent families in North Carolina. He was descended from General William Lenoir (1751-1839), Speaker of the North Carolina Senate, and she was a grand-daughter of Governor John Morehead (1796-1866).

The Pattersons divided their time between Manhattan and their sprawling estate Lenoir at Southampton on Long Island where Rufus indulged his passion for growing orchids.

In 1945, the widowed Mrs Patterson placed her townhouse on the market for $250,000. For the previous year-and-a-half, the Kosciuszko Foundation - founded in 1925 to promote "educational and cultural exchanges between the United States and Poland" - had been searching for a new, modest home. Mrs Patterson generously lowered the price to $85,000 to meet with their budget before donating a further $16,000 to help pay off their mortgage. Over one hundred years later, the house is almost entirely as it was when built by Van Alen and it continues in its role as the home of the Kosciuszko Foundation.

Leather Armchairs: A Guide to the Great Clubs of London By Charles Graves. Introduction by P.G. Wodehouse

Some Like It Hot By (Starring) Marilyn Monroe, Tony Curtis & Jack Lemmon

The Things We Cannot Say: A Novel By Kelly Rimmer