Built in 1797, for Judge Peter Van Ness (1734-1804) and his wife Elbertje Hogeboom (1743-1806). Lindenwald is today better known as the "Martin Van Buren National Historic Site" as from 1839 it was the home of Martin Van Buren (1782-1862), 8th President of the United States. Since its construction, the 36-room mansion was altered by the Van Ness family and then by Van Buren and his son, Smith. A lesser known fact is that in 1864 Lindenwald became the property - allegedly lost in a game of cards - of Leonard Jerome (1817-1891), "The King of Wall Street" and grandfather of British Prime Minister Sir Winston Churchill (1874-1965). Situated in the picturesque Hudson Valley, a few miles north of Clermont Manor, today Lindenwald is a popular house museum....
zoom_in 7 images 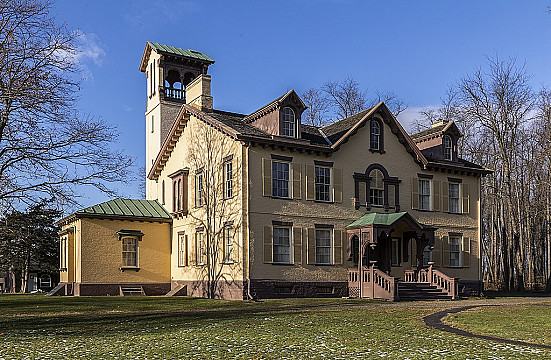 In 1780, Peter Van Ness purchased the 260-acre farm from the Van Alstyne family and named it "Kleinrood". The Van Alstynes - President Van Buren's grandmother's family - owned 3,000-acres at Kinderhook which had been part of the Thomas Powell Patent of 1664. Prior to 1609, the Hudson River Valley was solely occupied by the Mahicans.

A Burr in the Bushes at "Kleinrood"

It wasn't until 1797 that Judge Van Ness built the Federal-style house on his property, "as fine a house here as any reasonable man could". His eldest son, John Peter Van Ness (1769-1846) was ensconced in politics at Washington D.C. - where he built the Van Ness House - and so on his death the house and farm came to his second son - President Van Buren's close friend - Judge William P. Van Ness (1778-1826). It was William who enticed the President to train for his legal career in New York City, kindling his political career.

In 1804, William P. Van Ness acted as the second for Aaron Burr (1756-1836) at the infamous duel which resulted in the death of Alexander Hamilton (1755-1804). Afterwards, it was whispered that William was hiding Burr at Kleinrood.

Five years later, Van Ness employed a young Washington Irving (1783-1859) to live with them at Kleinrood in the capacity of tutor to the Van Ness children. It was during this time that Irving completed his first major book, "A History of New York".

Van Buren took up residence at his new home in 1841. He expanded the farm until it incorporated 221-acres and renamed it "Lindenwald" (German for "Linden Forest") for the Linden trees that lined the Albany-to-New York Post Road on which the house stood. He had originally wanted to called it "The Locusts" but was dissuaded by friends who informed him that James Fenimore Cooper (of Otsego Hall) had given that name to the principal house in his book, The Spy, said to have been modelled on the "Jay Estate".

Known as "Old Kinderhook" Van Buren ran twice more for President (managing his campaigns from Lindenwald) but failed on both occasions. Nonetheless, he settled easily into country life enjoying daily excursions on horseback and horse-racing meets that he organized at Lindenwald. He only left to spend part of each summer at Saratoga Springs.

Though widowed since 1819, from 1842 Van Buren was joined at Lindenwald by his youngest son, Smith and Smith's newly married first wife, Ellen King James (1823-1849), aunt of the celebrated novelist, Henry James (1843-1916). Eventually, all four of Van Buren's sons would keep rooms at the 36-room mansion. The retired President allowed Smith to make various alterations, employing the architect Richard Upjohn (1802-1878) for the task.

The additions included a ballroom, the porch, dormer windows in the roof, the pitched gable at the front and most notably the 4-story bell-tower (minus bell). Van Buren contemplated: "What curious creatures we are. Old Mr Van Ness built as fine a house here as any reasonable man could... its taste of what was then... deemed the best... Wm. P. came and disfigured everything his father had done. I succeeded him and pulled down everything without a single exception - every erection he had made with evident advantage. Now comes Smith and pulls down many things I had put up and makes alterations without stint... What nonsense"!

Lost at Cards to "the King of Wall Street"

Van Buren died at Lindenwald in 1862. His second son, John Van Buren (1810-1866), bought out his two surviving brothers with the intention of using it as his country home. But in 1864, the property was acquired by the "the King of Wall Street" Leonard Jerome (1817-1891) - grandfather of British Prime Minister Sir Winston Churchill - who according to legend won it during a game of cards from John Van Buren, who was well-known as an obsessive gambler. Jerome never lived there, but maintained it as a working farm.

From 1867, the house stood unoccupied as the farm passed through several successive hands: Jerome sold the farm to George Wilder and in 1873 he sold it to John Van Buren (a distant cousin) and James Van Alstyne. Five months later (1874) they sold it for $30,000 to the brothers - and "thrifty farmers" - Adam (1846-1930) and Freeman Wagoner (1851-1929). The Wagoners continued to run Lindenwald as a farm until 1917, by which time Adam Wagoner was in sole possession and he'd brought the house back to good repair.

In 1917, Wagoner maintained 36-acres, but sold the house and 185-acres to Dr Bascom Birney. Dr Birney had intended to sell the house on but he and his family quickly became attached to it and took up residence there. In 1922, his daughter, Marian, took ownership of the house, followed just three years later (1925) by her sister, Clementine Birney (1903-1989), the wife of William Lynch de Prosse (1900-1975). Unable to take up residence there until 1930, during that period it was kept for them by the Schneck family.

In 1945, the de Prosses sold off 166-acres, maintaining just the 13-acres that surround the house - as the property remains today. In 1957, they sold Lindenwald to Ken Campbell, an antique and bric-a-brac salesman who took to displaying his goods on the lawn and opened a small shop by the south gate house. In a clash of styles, he also fixed an antebellum-esque pillared porch to the front of the house. The house and grounds began to fall into a bad state of disrepair which led to it being purchased from Campbell in 1973.

Having been acquired by the National Park Service, Lindenwald was restored to its former self as Van Buren would have recognized it. It continues to operate today as a popular house museum.

A Return to His Native Town: Martin Van Buren's Life at Lindenwald, 1839-1862 By Leonard L. Richards

The Legend of Sleepy Hollow By Washington Irving