Built 1860, for a Mr Bates, who it can be presumed lost his wife or died around about this time as he never occupied the house he built.It stood an a 20-acre estate and is best associated with Peter Arrell Brown Widener (1834-1915) who eventually replaced it in 1898 with the palatial Lynnewood Hall....
zoom_in 1 images 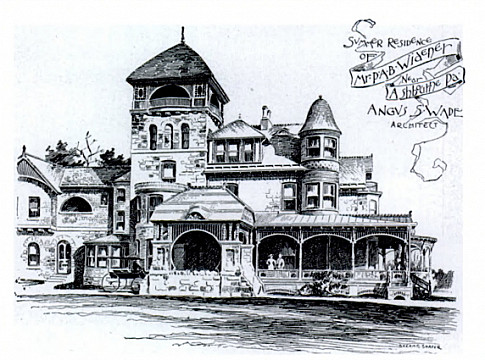 In 1861, the house was sold to prominent local residents Jay Cooke (1821-1905), of Ogontz and John Thomas for the purpose of establishing a girl's boarding and day school, principally for their own daughters who were all educated there. They entrusted the school to a Miss Rachel Carr who rented the property from them and established Miss Carr's Ladies Seminary, that at it's peak had 43 pupils, mainly boarders.

In time, the seminary moved to Eildon, afterwards occupied by Cooke's son-in-law, Charles Dennis Barney (1844–1945), when the school dissolved in 1878.
Linwood was purchased by a Dr L.S. Pepper and afterwards came into the possession of a Mr Charles Richardson. Sometime in the 1880s, the house was purchased by Peter Arrell Brown Widener (1834-1915) as a summer residence for his family and immediately set about remodelling it. He hired the architect Angus S. Wade (1865-1932) to enlarge the house and by 1890 significant alterations had been made as well as new outbuildings erected. A three story addition was attached to the original house which also benefitted from a new roof, porches, gables, dormer windows and stone chimneys. The interior was panelled in wood with stone frescoes, while baths and electricity were installed too.

The precise fate of the original Linwood is not exactly clear, though it was almost certainly demolished when Widener's ever-growing art collection led him to construct Lynnewood Hall on the estate that he had by then grown to some 300 acres in 1898.