Built in 1856, for Pierre Lorillard III (1796-1867) and his wife, Katherine Ann Griswold (1809-1856). Overlooking the natural beauty of Bronx Park just north of Pelham Parkway, this 68-room, solid stone mansion was the grandest in the vicinity and rose high above the river on which the old Lorillard Snuff Mill once ground its owner's fortune. The 250-acre estate included a hemlock forest said to be without rival, and the grounds enjoyed magnificent trees, lawns, and "Acre of Roses" (later renamed the “Old-Fashioned Flower Garden”) that were threaded through with winding pathways that are still enjoyed by countless New Yorkers as part of the New York Botanical Gardens....
zoom_in 6 images 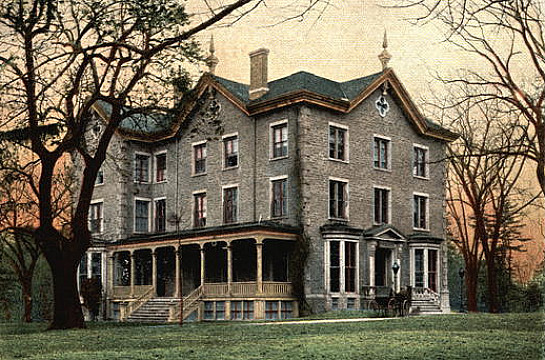 The 68-room stone mansion measured 100-feet by 75-feet and stood three stories high on a hill over the river. After the death of the third Pierre, it passed into the ownership of his eldest son, Pierre Lorillard IV. Three years later, he moved the family tobacco factory to Jersey City and in 1884 he sold the grounds to the City of New York which in 1915 were transferred to the New York Botanical Garden. The original stone stables, "in their strikingly picturesque setting" were often mistaken for an old chapel. Pierre IV was the man who built the original Breakers at Newport in 1878, but he sold that at the same time as selling the Lorillard estate in the Bronx in order to focus on the development of the uber exclusive Tuxedo Park which he co-founded from 1886 with his brother, Jacob.

While other members of the Lorillard family moved away from the Bronx, Jacob retained a parcel of the original land on which he built his home on the same spot, "where once the old Hell Gate pilots dwelt". He built it in the style of a Swiss Chalet and named it "All Breeze" for what in summer was the refreshing breeze it was said to enjoy all day long. A keen yachtsman, Jacob was one of the few businessmen to make his daily commute into the city by steam yacht. The chalet has since disappeared and by at least the early 1920s the old Lorillard mansion had become a museum and home to the Bronx Society of Arts & Sciences before being lost to fire in 1923. Sparks from a chimney had caught light on the roof but firefighters struggled to control the blaze due to a lack of available water pressure and many valuable relics from the Revolutionary and Indian periods were lost.

The ruins of the mansion were demolished but today the grounds are still maintained by the New York Botanical Gardens and the old Lorillard Snuff Mill (that enjoyed a $10.5 million restoration in 2010) still stands as a reminder of the Lorillards and days gone by.