Completed in 1878 for Pierre Lorillard IV (1833-1901) and his wife Emily Taylor (1841-1925). Designed by Peabody & Stearns, the Queen-Anne style residence was noted for its steeply gabled roof, high tower and the detached cottage that was used by the Lorillard's children as a playhouse - which still stands....
zoom_in 6 images 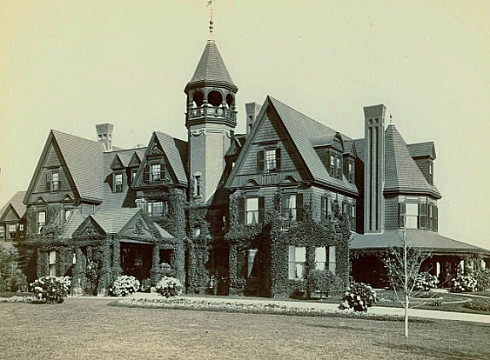 In 1885, in order to develop Tuxedo park in New York, the Lorillards sold the home they'd christened "The Breakers" to Cornelius Vanderbilt II (1843-1899) and his wife Alice Claypoole Gwynne (1845-1934). The Vanderbilts rehired the original architects to carry out several improvements to the house. But, just seven years later (1892), a fire ravaged the old mansion and it was replaced by what is recognized today as Newport's - and one of America's - most iconic mansion The Breakers.