Completed in 1929, for Matilda (1883-1967), the widow of John F. Dodge, and her second husband Alfred G. Wilson (1883-1962). After the demolition of New York's Inisfada, Meadow Brook Hall is America's grandest surviving example of Tudor-Revival architecture. Often referred to as one of Americas "castles" at 88,000-square feet it is the 7th largest historic house ever built in the United States behind Shadow Lawn in New Jersey. Today, it's owned by Oakland University but both the house and grounds are open to the public and as a venue for society weddings it is a popular attraction....
zoom_in 9 images 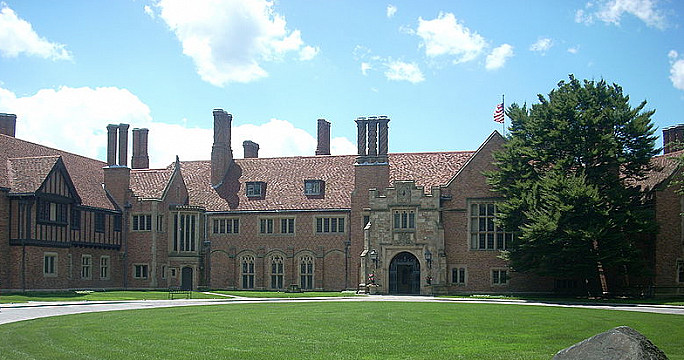 Matilda was the secretary and afterwards the second wife of John F. Dodge. John and his brother, Horace E. Dodge were the founders of the Dodge Motor Company in Detroit. The brothers had been inseparable from an early age and when John died, Horace did not last the year. In 1926, Matilda and Horace's widow, Anna, sold their shares in the Dodge Company for $146 million shortly before its merger with the Chrysler Group. Overnight, they became two of the wealthiest women not only in the country, but the world.

From Farm to Fantastic

In 1908, Matilda and John Dodge purchased a Victorian-esque 14-room country home for $50,000, fifteen miles north of Detroit. This was where the brothers designed the first Dodge automobile. The house stood on the highest point of a farm of 320-acres, surrounded by rolling countryside, meadows, brooks, and native woodland.

Over the years, the John and Matilda acquired a further eight adjoining farms until they had accrued an estate of 1,500-acres which they named "Meadow Brook Farms". They lived between here and Detroit as work started on their third home, the John F. Dodge Mansion, at Grosse Pointe. Though Dodge spent nearly $4 million on their Grosse Pointe home, he died before its completion and Matilda did not see the project through. The 100-room white elephant remained incomplete, was never occupied, and was demolished in 1941.

In 1925, Matilda took for her second husband the wealthy lumber broker, Alfred G. Wilson, who she met through her charitable work. After their wedding, they travelled extensively in Europe before returning to Detroit. In 1926, influenced by the old manors they had seen in England, they employed the architect William Kapp of the firm Smith, Hinchman & Grylls to build them a Tudor-Revival (English 15th/16th century-style) mansion in the center of Meadow Brook, taking full advantage of its magnificent views and where the sun set. The result was "Meadow Brook Hall", a 110-room architectural masterpiece of 88,000-square feet that took three years to build at a cost of $4 million.

Almost of all of the materials used in its construction (the brick, sandstone, wood timbers, and clay shingle tile roof) were sourced from Michigan. But, whereas the exterior is typical of Tudor England, the interior incorporates several different styles: Some of the rooms were copied from drawings made of those in old Tudor-English country houses; the Dining Room and Matilda’s study are Neo-Classical; the Game Rooms were designed to resemble the interiors of English country pubs; Matilda’s Bedroom and the 'French Bedroom' are French Rococo; and, her eldest daughter's bedroom is Colonial.

Meadow Brook boasts 39 spiralled chimneys (two more than Inisfada), the largest pipe organ in Michigan, a double-story Medieval hall, and for added authenticity, a hidden staircase. Ornately carved woodwork and stone is evident throughout and each of its 110-rooms were designed with their own custom-made door knob. There are numerous Tiffany stained-glass windows, hand-painted ceramic tiles, gold-plated plumbing, beautifully moulded plasterwork ceilings, and crystal chandeliers. There is a great winding staircase, a double-story ballroom, 4-kitchens, a conservatory, two elevators, an entire wing for domestic staff, and even a "fountain room" and a full-size home theater.

Formal gardens were laid out in close proximity to the manor, as was an 18-hole golf course. The estate was still operational as a large farm with numerous outbuildings and several workers houses. Ice cut from a lake on the estate was stored in the icehouse and there was also a two-roomed "root cellar" for fruit and vegetables grown on the estate where they could be stored year-round.

The Wilsons put together an impressive art collection and much of it remains here on display. It includes works by Anthony van Dyck (1599-1641), Sir Joshua Reynolds (1723-1792), Thomas Gainsborough (1727-1788), John Constable (1776-1837), and Rosa Bonheur (1822-1899). The sculptures found throughout the estate include works by Antoine-Louis Barye (1796-1875), Cyrus Edwin Dallin (1861-1944), and Herbert Chevalier Haseltine (1877–1962). The more playful sculptures in the grounds were created by Corrado Giuseppe Parducci whose career was propelled forward through sponsorship from the society sculptress Mrs Gertrude (Vanderbilt) Whitney, and the notable Pegasus sculpture is by Avard Tennyson Fairbanks (1897-1987). Inside, there is an array of furniture from all periods, and a significant collection manufactured by Gustav Stickley (1858-1942).

As might be expected of a house built with motor-car money, there were two garages at Meadow Brook Hall: The first was referred to as the "closed garage" in which the Wilsons kept their private automobile collection; and, the second was known as the "open garage" in which guests' cars were kept. The indoor equestrian arena and stables were a later addition to the estate, constructed in 1935 by Matilda's eldest daughter, Frances, and it was here that she famously trained and bred Hackney ponies and American saddlebreds.

Hidden within the woods is "Knole Cottage," Matilda's gift to her eldest daughter, Frances, on her twelfth birthday. Surrounded by a herbaceous border, the miniature cottage was fully plumbed, electrified, and decked out with child-size furniture down to the mini-vases that line the framed windows. There were Lilliputian portraits on the walls and even three tiny gravestones with flowers growing around them that marked the passing of three loved pets. It encapsulated a little girl's dreams on every level. Here, Frances could cook, eat, sleep, and give tea parties for her friends in the small gazebo nearby. There is also a log cabin on the estate that was used as a playhouse for Danny Dodge when he was a child, before he transformed it into a workshop, office, and laboratory.
Getting Through the Great Depression

Meadow Brook Hall was closed down for a brief time during the Great Depression in the 1930s, partly as it did indeed cost a fortune to run, and partly for social cohesion at a time when so many were suffering. Once the worst was over, it was opened again and in 1939 a 25th birthday party was held for Frances that swung to the Tommy Dorsey Band and Frank Sinatra. Over the following years, various members of the Dodge-Wilson family lived here, although Alfred and Matilda spent the majority of their time at nearby Sunset Terrace - today the official residence of the President of Oakland University.

In 1957, Alfred and Matilda donated all of their estate to Michigan State University, including Meadow Brook Hall, Sunset Terrace, and all the other buildings on the estate. Along with most of their art collection, they left a trust of $2 million with which to establish Michigan State University-Oakland, that became Oakland University. Having maintained lifetime interests in their various houses, Matilda returned to living year-round at Meadow Brook Hall after Alfred died in 1962. Five years later, she died here and in 1971 Oakland University opened the house and gave the first public tour.

In 1979, the estate was added to the National Register of Historic Places and in 2012 it was designated a National Historic Landmark. Oakland University continues its stewardship of Meadow Brook Hall, but it is fully open to the public as a house museum and is available for hire for a variety of social and corporate events. It is a particularly popular wedding venue and three of Michigan's best known celebrities - Eminem, Drew Stanton, and Shane Battier - held their wedding receptions here.

The Dodge Brothers: The Men, the Motor Cars, and the Legacy By Charles K. Hyde

The Tudor Home By Kevin Murphy

Tudor Style: Tudor Revival Houses in America from 1890 to the Present By Lee Goff