Completed in 1920, for Nicholas Frederic Brady (1878-1930) and his wife Genevieve Florence Garvan (1885-1938). Their Tudor-Revival mansion on Long Island's Gold Coast covered 90,000 square feet and was the 7th largest Historic House in the United States. It was a devastating loss to America's Gilded Age architecture, on a scale comparable perhaps only to Whitemarsh Hall and Ronaele Manor, when Inisfada was controversially demolished for development in 2013....
zoom_in 20 images 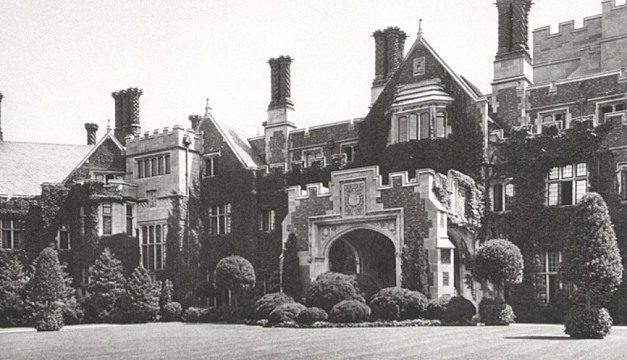 In 1926, the Bradys were officially recognized as America's pre-eminent Catholic couple when they were created Papal Duke and Duchess by Pope Pius XI in recognition of their substantial donations to the Catholic church that included gifts of over $12 million to the Vatican itself. Mrs Brady remains the most highly decorated Catholic lady in America, receiving among other honors the Laetare Medal from the University of Notre Dame.

Nicholas Brady's fortune of $60 million was built from scratch by his father, Anthony Brady (1841-1913), and increased by him and his brother, James. In the 1920s, it was widely joked - though true - that every time a New Yorker lit a bulb, used gas or smoked tobacco, the Bradys grew wealthier. In total, Inisfada (one of the Bradys three mansions) cost over $11 million to build and furnish. While very much an expression of their wealth, the Bradys also viewed it as a gift to the nation long after they were gone. Nonetheless, Mr Brady might still have sounded somewhat obsequious when he was quoted as saying, "what are rich people but the trustees of God for the deserving poor"!

Nicholas was often described as modest, but the Brady's country mansion was anything but that: Covering 90,000-square feet and containing 87-rooms, when it was built their Tudor-Elizabethan Revival colossus was the 4th largest private house in the United States. At the time of its destruction in 2013, it was the 7th largest historic house in the country, larger than The Breakers and only behind the likes of Biltmore and Oheka Castle.

Their mansion was situated off a road dubbed "The Irish Channel" owing to the several large mansions built along it by several successful Irishmen. In rolling countryside, it sat amidst a densely wooded 225-acre estate on the North Shore of Long Island's Gold Coast, just twenty miles from Manhattan.

To construct their home, the Bradys employed architect John Torrey Windrim (1866-1934) who was well-known in Philadelphia for his work on large-scale buildings, such as museums and hospitals. Inisfada was the only example of his work in New York. The landscaping was laid out by the noted designer Samuel Bowne Parsons Jr. (1844-1923).

Construction started in 1916, taking four years and according to The New Yorker, was completed at a cost of $3 million. The Bradys named their new home "Inisfada" which is Gaelic for "Long Island". Before they moved in, the house and its private chapel were blessed by Cardinal Giovanni Bonzano (1867-1927), Apostolic Delegate to United States.

It was faced with brick and dressed in trimmed limestone, set off by a numerous variety of quoins, crenelations, gargoyles, figurines and stone-mullioned windows. The gabled, grey-slated roof - on several varying angles - was punctuated with 37-Tudor-style chimneys, each one different to the next. Above the carriage-porch was a carving of the Saint for whom Mrs Brady was named, St. Genevieve, and interspersed within the brickwork around the mansion were stone-carved vignettes depicting characters from nursery rhymes and childhood fairy tales, such as Little Red Riding Hood and Puss-in-Boots.

Some of the world's finest artisans were shipped over to mould the high plasterwork ceilings and hand carve the finely fluted ionic pilasters, the oak and pinewood wall-panelling, and the magnificent bannisters on the Grand Staircase as well as the several hidden staircases. The three fish representing Jesus as a member of the Trinity are one of several recurring religious motifs carved or moulded throughout the house. Ironwork was completed by Samuel Yellin, and the sculptor Mario Korbel (1882-1954) made several life-size statues that were displayed throughout.

The Great Hall was an incredible 163-feet long, with a 50-foot high, arched and beamed ceiling. Vast tapestries hung at either end, one telling the tale of the Prodigal Son and another depicting 15th century court life in Rome. The rug that covered the marble floor was the same on which the coronation thrones of King Edward VII (1841-1910) of England and his wife Queen Alexandra (1844-1925) had been placed in 1902. A musician's gallery overlooked the Great Hall, complete with an Aeolian organ, the pipes of which went up two stories inside a stone tower to the very top of the house.

The Bradys had spent the previous 20-years acquiring $8 million worth of antique furnishings for the house as they travelled the world. There were gold-plated plumbing fixtures in the bathrooms; the Dining Room was panelled in late 17th century pine; and, the Master Bedroom featured Mrs Brady's 18th century walnut prayer desk and the Spanish Renaissance bed with a blue velvet canopy supported by forged iron bed posts. Downstairs was a heavy Georgian table with a mosaic top made in Roman times showing a bird in a chariot driving two wild animals, supported by a great gilded eagle.

Aside from the dozens of staircases, there was an elevator and the house had its own telephone exchange with 89 extensions! Outbuildings included a charming gatehouse at the foot of the drive and a chicken house near to the mansion for fresh eggs and poultry. Among the numerous rooms there was a wine cellar, solarium, billiard room, library and of course the private chapel. The Bradys entertained frequently, and lavishly. Whereas other society hostesses collected cabinet members, the Bradys collected notable Catholics.

The End of the Brady Bunch

In 1930, Mr Brady died suddenly and though a small army of caretakers and gardeners had kept Inisfada in sparkling condition, Mrs Brady found the place increasingly depressing. She continued to play an active part in the management of the estate, but she travelled extensively and preferred to spend time at their winter residence, Casa del Sole in Rome.

When Cardinal Eugeno Pacelli (1876-1958), the future Pope Pius XII, stayed as Mrs Brady's guest at Inisfada for three days in 1936, she held a grand reception for him and gave a dinner in his honor for 700 guests. She filled the house with flowers and the drive was lined with thousands of tallow candles. It was the last great party (though likely not the Gilded Age's wildest!) held at Inisfada, and the library was left as it was during his visit.

In 1937, Mrs Brady became engaged to William J. Babington Macaulay (1893-1964), the Irish Ambassador to the Vatican. They intended to live full time at Casa del Sole and that year she sold Inisfada and 122-acres for a hugely deflated price of $471,761 to the New York Province of the Society of Jesus for use as a seminary: "St. Ignatius Retreat House".

Before the Jesuits took possession, an auction was held to sell off the furnishings and its reputedly brilliant collection of art. 11,500 New York dealers, collector's agents and members of the public flooded to Inisfada for the grand event, paying 50-cents a head to gawk at the mansion and bid for its furnishings. In all, the auction raised $450,000 for charity, $50,000 for Fordham University, and over $600,000 for the Jesuits.

The Jesuits had taken vows of poverty, so the spacious halls were transformed to meet their plain aesthetic tastes, and the master bedroom was one of many to be divided up into sixteen small, plain cells. Some of the interior was removed, but it retained the vast majority of its wooden panelling, Jacobean strapwork and ribbed plaster ceilings.

While the Jesuits enjoyed their new home, for reasons probably not too hard to decipher, they never had Inisfada added to the National Register of Historic Places (the only one of the ten largest historic homes in the country not to be added), nor did they have it designated a National Historic Landmark (one of only three not to receive that status).

In 2012, the Manhasset Press reported that the Jesuits put the house and its remaining 33-acres on the market for $49 million, advertizing Inisfada as, "a prime development site".

Despite the efforts of various residents and civic associations to save Inisfada, the Jesuits sold it in 2013 for $36.5 million to the Hong Kong-based development company, Manhasset Bay Group Inc. On December 5, 2013, Inisfada was demolished to make way for a housing development - the Bradys would have been horrified. Paul Mateyunas of Daniel Gale Sotheby’s International Realty said, "it is one of the grandest and most intact homes to come down in over 30 years. What we have lost this week can never be replaced".

The Irish Americans: A History By Jay P. Dolan

Tudor Style: Tudor Revival Houses in America from 1890 to the Present By Lee Goff

Long Island Country Houses and Their Architects, 1860-1940 By Anthony Baker, Robert B. MacKay, Carol A. Traynor. Foreword by Brendan Gill

Inside the Vatican of Pius XII: The Memoir of an American Diplomat During World War II By Harold Tittmann Jr.