Built circa 1764, for Colonel James Madison (1723-1801) and his wife Eleanor Rose Conway (1731-1829). Standing on what is now an estate of 2,700-acres, four miles south of Orange, Montpelier is the former plantation home of James Madison (1751-1836) who succeeded his neighbour at Monticello as the 4th President of the United States. It remained a private house and from 1900 to 1984 it was the summer home of a branch of the celebrated du Pont family who made many additions and even remodelled two of their other homes in Delaware (nb. Bellevue Hall) to replicate Montpelier. Since 1984, it has been restored to its original splendor - as it was when Madison lived there - and is operated as a house museum by the National Trust for Historic Preservation....
zoom_in 1 images 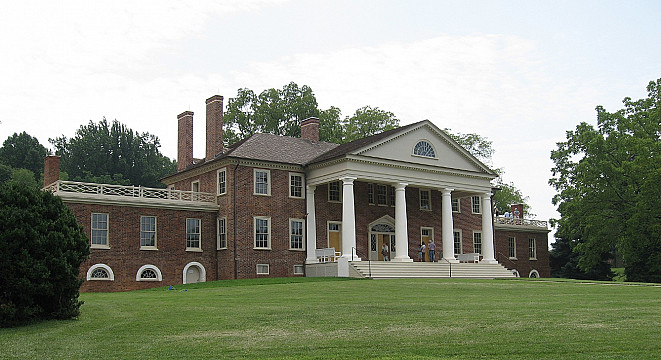 Ambrose Madison was the father of Colonel Madison and the grandfather of President James Madison. Ambrose and Thomas Chew (1698-1781) married the two eldest daughters of James Taylor II who in 1723 gave them joint-patent to 4,675-acres in the Piedmont of Virginia (Orange County). In 1732, five years after a house had been built and tobacco cultivation had started, Ambrose took up residence on the plantation that he named "Mount Pleasant" with his wife, Frances Taylor (1700-1761), and their children. But, six months later Ambrose was apparently poisoned by three of his 29 slaves, and died. As the plantation had never been officially divided between the joint-owners, it initially reverted to Chew before he deeded 2,850-acres of the original patent to the Madisons in 1737.

Supported by her Taylor relatives, Frances ran the plantation until her eldest son, Colonel James Madison (1723-1801), came of age in 1744. He married Eleanor Rose Conway (1731-1829) and to accommodate his family in about 1764 he built a new two-story, brick plantation house with a Flemish bond pattern and a low, hipped roof with chimney stacks at both ends. Typically Georgian in style, there were four rooms and a central passage on the first floor and four bedrooms on the second. He named it "Home House" and it was about half a mile from the old one and forms the central structure of Montpelier. The Colonel added outbuildings (including a blacksmith's shop), slaves, and a further 5,000-acres to his estate, making him the largest landowner in the county.

In preparation to inheriting "Home House" - and shortly before becoming Jefferson's Secretary of State - James Madison lengthened the property by 30-feet and to unite the new with the old, he filled the space between them with a grand four-columned, two-story portico. By 1812, the house had attained its present form with the construction of wings either side (attributed to Benjamin Latrobe), new windows, and a new central doorway. His mother, Nelly, made her home in the south wing until her death in 1829, while the north wing contained the his extensive library. It was first referred to as "Montpellier" in 1781, taking its name from the seaside town in the South of France. Though referred to and spelt "Montpelier" today, Madison spelled it the French way. In 1817, having completed his second term as President, James and Dolley retired to their plantation.

Having no children of their own, Madison willed the property to his widow in 1836. But, just eight years later she was forced to sell Montpelier to cover the debts accumulated by her only surviving child from her first marriage, the wastrel John Payne Todd (1792-1852). To her great sadness, she lived out the remainder of her days in Washington D.C.

Montpelier's new owner was Henry Wood Moncure (1800-1866), a prominent merchant from nearby Richmond. He lived here with his wife, Catherine Cary Ambler (1802-1850), and barring some minor alterations to the interior plastering, Montpelier remained unchanged. They sold up after just four years and much to the ire of the local community, the house came into the possession of an Englishman, Benjamin Thornton.

Thornton was a native of Gomersal in West Yorkshire. On taking possession of Montpelier, he altered the portico, replaced the roofs on the wings, built a new staircase, covered the exterior walls in stucco, and made various changes to the landscape. But, perhaps not feeling welcome, he sold up and moved on after just six years (1854).

Changing hands in quick succession: Montpelier was briefly the home from 1854 to 1855 of William Hamilton MacFarland (1799-1872) who had been chosen to give the eulogy to Madison at his memorial service held in the state capital, Richmond. He sold it to Colonel Alfred Vernon Scott (1803-1860) who relocated here from Alabama with his wife, Rebecca Ballard Nixon (1807-1897). But, two years later (1857) it was sold again for $8,000 to an Irishman, Thomas J. Carson, who had established a successful business in Baltimore. During the Civil War, his eccentric brother, Frank Carson (1819-1881), occupied the house and Confederate troops often camped in the grounds. Thomas died in 1862 and willed the property to his brother. After Frank died here in 1881, an auction took place of much of the furniture that had belonged to the Madisons and the house was sold again.

A Summer Home... and Escape

In 1881, Montpelier was purchased for just $3,500 as a summer home for the families of Louis Frederick Detrick (1831-1898), of Baltimore, and his recently retired business partner, William L. Bradley (1846-1894), of Boston. In 1900, the heirs of both families sold the house and its remaining 1,235 acres to the agent acting for William du Pont (1855-1928), of Delaware, to whom he transferred the property the following year. William was the uncle of the collector of Americana, Henry du Pont, who transformed Winterthur.

Du Pont had been ostracized from Delaware society for having conducted an affair with a divorcee to whom he then married in 1892, Anne Rogers. After a period of living in England at Loseley Park, they returned to America and purchased Montpelier that was far enough away from Delaware to allow them to enjoy life without being judged.

William and Annie almost immediately set about modernizing the old house, almost doubling its original size, covering it in white stucco and increasing the size of the estate to 2,302 acres. Here Du Pont enjoyed his recreational pursuits that were driving, shooting and breeding livestock; notably horses and Jersey cattle. By the early 1910s, the ill-feeling that had existed towards the Du Ponts in Delaware dissipated and Montpelier became more of a summer home as they made Bellevue Hall their primary residence.

Marion made further additions to the house, most notably creating the art-deco styled "Red Room". Both she and her brother, William du Pont, Jr. (1896-1965), had inherited their father's passion for horses and in 1934 they established the Montpelier Hunt Races that continues to be held at the house today. In 1938, her most famous horse, Battleship, became the first American horse to win the British Grand National.

Marion was the last private owner of Montpelier and on her death she bequeathed her home and $10 million to the National Trust for Historic Preservation. However, her father's will had stated that if she died childless then Montpelier was to revert to her brother (who had predeceased her) and his children, who included the unstable John Eleuthère du Pont (1938-2010), portrayed by Steve Carell in the movie Foxcatcher (2014).

Marion had hoped to make her decision palatable to her five nephews and nieces by the promise of a significant trust fund should they concur. In 1984, John was one of the two nephews who unsuccessfully attempted to break the trust in a legal wrangle, but later that year Montpelier came into the possession of the National Trust.

In 2008, the National Trust and the National Trust Community Investment Corporation completed a five year, $25 million project to restore Montpelier to how it appeared in 1820 when it was the home of President Madison. They paid tribute to Marion by moving her beloved art-deco room into the visitors center and in 2003 proportioned 200-acres of the estate to the Thoroughbred Retirement Foundation. In 1960, Montpelier was designated a National Historic Landmark and six years later it was added to the National Register of Historic Places. In 1991, it was included in the Madison-Barbour Rural Historic District. It is open throughout the year except for Thanksgiving and Christmas.

James Madison's Montpelier: Home of the Father of the Constitution By Montpelier Foundation

First Ladies of the Republic: Martha Washington, Abigail Adams, Dolley Madison, and the Creation of an Iconic American Role By Jeanne E. Abrams

The Virginia Dynasty: Four Presidents and the Creation of the American Nation By Lynne Cheney

Dominion of Memories: Jefferson, Madison, and the Decline of Virginia By Susan Dunn