Built from 1837, for Jacques-Antoine Bidermann (1790-1865) and his wife Evelina Gabrielle du Pont (1796-1863). It was transformed from a 12-room Greek-Revival manor into a 175-room colossus predominantly under the ownership of Henry Francis du Pont (1880-1969). Through his passion for horticulture and Americana, du Pont purposefully transformed his home into the "Winterthur Museum, Garden and Library". Only fractionally smaller than Arden House in New York, today the mansion covers 96,582 square feet which makes it the 5th largest historic house in the States - and the 4th largest still standing. The estate is considered one of America's finest and the museum itself houses the world's premier collection of American Decorative Arts....
zoom_in 18 images 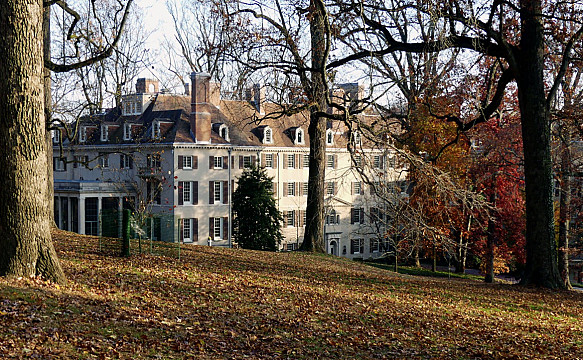 In 1802, Evelina's father Éleuthère Irénée du Pont de Nemours, established a gunpowder factory at Wilmington in the Brandywine Valley. In 1810, he acquired 700-acres of rolling countryside along the Brandywine River with meadows, streams and woodland, that on his death in 1834 he left between his eight children. Evelina and Jacques (who were also known as Evelyn and James) bought out her siblings and over two years built a 12-room mansion there. This mansion, completed in 1839, was named "Winterthur" (pronounced "winter-tour") for the Swiss town near Zürich of Bidermann's ancestors.

In 1865, the estate was inherited by their son, James Irénée Bidermann (1817-1890). But, just two years later he sold it to his uncle, Major-General Henry du Pont (1812-1889), who purchased it for his as yet unmarried son (James' first cousin), Senator Henry Algernon du Pont. In 1874, H.A. du Pont married Mary Pauline Foster and two years later they moved into Winterthur. On the General's death in 1889 the title deed to the estate passed into the Senator's name and in 1902 he enlarged the house to 30-rooms, adding a new façade and library wing.

The Senator's only surviving son, Henry Francis du Pont (1880-1969), was born at Winterthur and adored his childhood home. In The New York Times, his daughter, Ruth Ellen du Pont (b.1922), recalled a letter he sent from Groton School in Massachusetts, "I am just wild to get back (to Winterthur)" and after studying horticulture at Harvard he returned a year later to manage the 2,500-acre estate for his father. He bred Holstein-Friesian dairy cattle and took charge of the grounds and gardens before inheriting the family home on the death of his father in 1926. That year, he built Chestertown House as an experimental precursor for his ultimate achievement at Winterthur.

From 1928 to 1932, du Pont carried out an extensive building program - to his own designs - that saw Winterthur increase almost sixfold to 175 rooms. In contrast to the majority of Gilded Age Estates, du Pont was not making a display of his personal worth. In 1923, he had stayed at the Vermont home of James Watson Webb II (1884-1960) and his wife, Electra Havemeyer (1888-1960), the famous collector of Americana and founder of the Shelburne Museum. This visit and a subsequent one to Beauport only days later ignited within him a passion for American antiques and decorative arts that culminated in the transformation of Winterthur from a family home into a public museum.

Driven by his chauffeur to various sales of all descriptions across the eastern states, he concentrated on collecting pieces from 1640 to 1840. Du Pont was careful not to display a series of galleries: He designed the size of each room to fit with various architectural details and sometimes entire panelled rooms salvaged from old, dilapidated or lost houses, eg. the James Watson House. Enlisting the help of Henry Davis Sleeper (1878-1934), he then furnished each one as a room with antiques appropriate to their era and geography.

To mention but a few of the incredible variety of rooms created at Winterthur, there was the two-story hall with its magnificent murals taken from the East Springfield home of Ezra Carroll (1783-1844) in New York; the opulent 18th century Port Royal Parlor - sometimes called the most beautiful room in America - was reminiscent of the double parlor that existed in the home of General John Cadwalader (1742-1786); the Chinese Parlor that greatly resembled that at Beauport; the Pennsylvania German Bedroom; the elegantly panelled Marlboro Room; the Duncan Phyfe Room displaying thebwork of one of New York's premier cabinetmakers; the Shaker Dwelling Room with its fine woodwork, etc., etc.

Across its 175 rooms, the house displays more than 85,000 antiques and the library holds 87,000 books and 500,000 manuscripts. Today, the estate covers 983-acres and its gardens and grounds were again the result of du Pont's own plans, executed over several decades. The depth of his horticultural knowledge and his awareness of nature blends effortlessly with his skill in landscape design. The gardens are no less of an achievement than the beauty preserved within the house itself.

Du Pont lived at Winterthur with his wife, Ruth Wales (1889-1967), and their two daughters. Having established the non-profit Winterthur Corporation in 1930 as a first step towards creating a public museum, in 1941 he partially opened the house for the first time, though numbers of visitors were limited and they were required to write in advance for tickets. In 1951, the du Ponts moved to a smaller home they built at nearby Clenny Run and Winterthur opened fully as a museum, followed by the gardens the following year. Today, a number of events are held there from workshops to weddings.

In recognition for his achievements at Winterthur, Henry Francis du Pont received an array of accolades, including: The first Thomas Jefferson Award given by the American Society of Interior Decorators; the highest awards given to non-professionals from the National Gardening Association and the Garden Club of America; Mrs Kennedy, asked him to help oversee renovations to the White House in the early 1960s; and, among others he sat on the boards of the New York Botanical Garden, the Whitney Museum of American Art and the Cooper-Hewitt National Design Museum.

The Winterthur Garden Guide: Color for Every Season By Linda Eirhart

Electra to the Rescue: Saving a Steamboat and the Story of Shelburne Museum By Valerie Biebuyck