Built in 1750, as a summer home for Chief Justice William Allen (1704-1780) and his wife Margaret Hamilton (1709-1760). Although the "large and commodious" house was demolished over 175-years ago, the land on which it stood is now a neighbourhood within the City of Philadelphia and still bears its name....
zoom_in 1 images 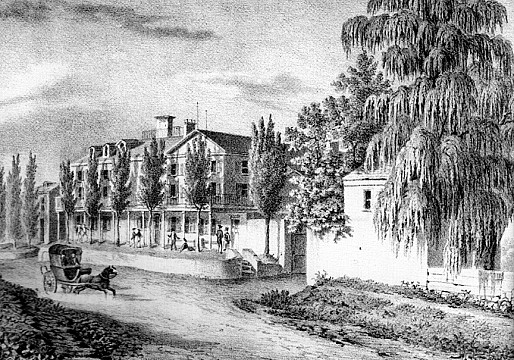 William Allen, Chief Justice of the Province of Pennsylvania

The Allen mansion stood on 47-acres of land at the corner of today's Allen Lane and Germantown Avenue - in fact it was built so close to the Avenue that the second story porch extended over the sidewalk. The Allens developed a large garden and were frequently seen driven around in their carriage with four black horses.

Allen was considered to be the wealthiest man of his generation in Philadelphia and accordingly Mount Airy was a magnate for the leading figures in society. Staying here in 1767, Benjamin Chew (1722-1810) was inspired to purchase a neighbouring parcel of land on which he built Cliveden. It was also here that John Penn (1729-1795), the last Colonial Governor of Pennsylvania, courted and eventually married, Anne Allen (1746-1830).

In 1777, the British Army was advancing on Philadelphia and Congress passed a resolution that Crown officials and the Proprietors of Pennsylvania should be placed under arrest; this included Allen's son-in-law, John Penn, his good friend Chief Justice Chew and Allen himself. In comparative freedom, they passed the next year in New Jersey on the estate shared by Allen and Mrs Chew's uncle, Joseph Turner (1701-1783). Later that year, the Battle of Germantown commenced at Mount Airy.

Following William Allen's death in 1780, it is presumed the property was passed to his second son, Andrew Allen (1740-1825), who in 1798 donated the land on which the first school was built in the vicinity. By the early 1800s, Mount Airy had become a Seminary and afterwards became a military academy of some distinction known as The American Classical and Military Institute, visited by the Marquis de Lafayette. Graduates from the academy included General George Gordon Meade (1815-1872), Captain Richard Worsam Meade II (1807-1870) and General Pierre Gustave Toutant Beauregard (1818-1893).

In 1846, the property was acquired by James Emmett Gowen (1787-1871) who demolished the old house in 1848 to make way for his new one, Magnolia Villa, which is today the Hagan Hall/Center at Philadelphia's Lutheran Theological Seminary.

Germantown: A Military History of the Battle for Philadelphia By Michael C. Harris