Completed in 1767, for Chief Justice Benjamin Chew (1722-1810) and his second wife Elizabeth Oswald (1734-1819). Cliveden is an outstanding example of Colonial Philadelphia architecture with a particularly fine interior. The Battle of Germantown was fought here in 1777 and except for a brief period between 1779 and 1797 the house was occupied for over 200-years by seven successive generations of the Chew family. Today, The National Trust for Historic Preservation operates Cliveden as a historic house museum and events venue, offering tours from April through December....
zoom_in 8 images 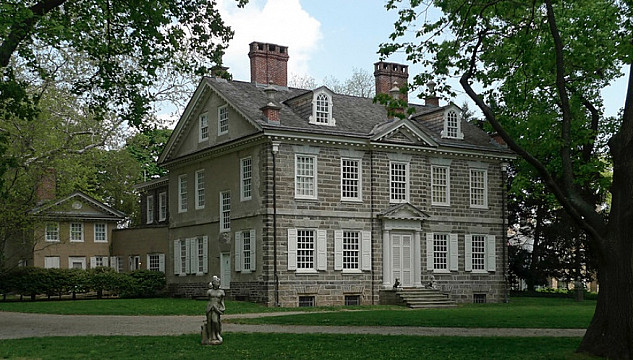 Chief Justice of the Supreme Court of Pennsylvania

Benjamin Chew was a lawyer who for 60-years represented the Penn family on all legal matters concerning their proprietorship. At the time of building his summer home, Cliveden, he occupied several important posts but is best remembered as the Chief Justice of the Supreme Court of Pennsylvania. A Loyalist, he was removed from office during the Revolution but his legal career resumed from 1791 when he held his last post as Judge and President of the High Court of Errors & Appeals until his retirement in 1808.

The Chew family spent the summer of 1763 as the guests of Chief Justice William Allen at Mount Airy. By July, Chew had endeavored to build himself a summer retreat in the same vicinity, as much for leisure as to keep his family safe from the outbreak of Yellow Fever that had swept through Philadelphia the previous year. To that end, he paid from Edward Penington (1726-1796) £650 for 11-acres of land to the east of Germantown.

Cliveden took four years to build at a total cost of £4,718. In collaboration with the master builder, Chew designed the house himself emphasising his desire for a plain, typically Georgian house. However, he made room for two embellishments (his favorite features) that made the house unique in Pennsylvania: urns imported from England were placed on the roof and in the gardens; and, a colonnade connected the kitchen to the main house.

When Chew purchased the property, he made use of the two existing stone buildings. He enlarged one that he made into the kitchen, and kept the other as the laundry. This set-up created a courtyard at the back, rather than front as at Mount Pleasant. Other outbuildings included a stable and coach house, a smoke house, hen house, and summer house. The hall with its spectacular screen of four Doric columns and elaborate woodwork mirrored Chew's chambers in the Pennsylvania State House, now Independence Hall.

Revolution & the Battle of Germantown

In 1777, the British army was advancing on Philadelphia and all Crown officials and the proprietors of Pennsylvania were placed under arrest. Included among them was of course Chief Justice Chew and he was detained with the John Penn etc. in New Jersey. In his absence, Cliveden was occupied by the British and it was at the center of the action when they defeated the Americans at the Battle of Germantown. Chew returned to find his home "an absolute wreck". The house had withstood a barrage of infantry and artillery fire, and though the walls were in tact, the house bore the heavy scars of battle. The original bullet-riddled front-door - though not in use for obvious reasons - can still be seen today.

In 1779, unsure of his future position in the colony and unable to afford the repairs, Chew took the decision to sell Cliveden to Blair McClenachan (1751-1812). That he was able to do this when every other Loyalist had had their property confiscated was due to the great respect in which he was held by both George Washington and John Adams. In 1791, he was appointed Judge and President of the High Court of Errors and Appeals in the new country, and six years later in 1797 he was able to buy back his old summer home.

When Chew died in 1810, Cliveden was passed to his son, Benjamin Chew Jr. (1758-1844). He lived there with his family and among other distinguished guests to Cliveden and in 1825 entertained the Marquis de Lafayette. He increased the estate to 66-acres and made various improvements to the grounds, but his lifestyle led him into financial difficulties.

After Benjamin Jr. died in 1844, a bitter family feud erupted over the settlement of his reduced estate that he had intended to divide equally among his children. The only exception was that he specifically left Cliveden to his widow with an annuity of $2,250. Their son, Benjamin Chew III - or "Bad Ben" - was hot-tempered and aggressive and as an executor of the will decided to take matters into his own hands, forcefully taking possession of Cliveden and then doing his best to disinherit his siblings altogether. His mother was so scared of him, that when her other children took him to court to have him removed as an executor, she took his side and vehemently defended him. From then on, he made a point of contesting every decision made as concerned their father's will and in the process purposefully squandered what was left of the family fortune on legal fees.

A court order eventually evicted "Bad Ben" from Cliveden in 1857, but on leaving he took all the family furniture, silver etc. bequeathed to him by his mother and in turn left all those heirlooms to his housekeeper who died a month after him in 1864.

Chew family tradition has it that Bad Ben's nephew, "Centennial" Samuel Chew (1832-1887) succeeded in buying back some of this furniture at auction, and those pieces are said to make up part of the collection in the house today. In the meantime Bad Ben's spinster sister, Anne Sophia Penn Chew (1805-1892), retook possession of Cliveden and despite it having fallen into bad repair, she bought out her surviving siblings at a cost of $13,200 and undertook sole responsibility for restoring Cliveden through her own pocket.

In 1868, at a cost of $5,000 that she could barely afford, Anne added the two-story wing to the rear that was designed in such a way as to not interfere with the front aspect of the house. This was built primarily for her nephew, "Centennial Sam," who spent the summers at Cliveden with his wife, Mary Johnson Brown and their young family. Sam
worked hard to have the house recognized as an historic landmark and his nickname was given to him for his support of America's Centennial celebration, held in Philadelphia.

Anne intended to leave the house to "Centennial" Sam but he predeceased his aunt and on her death she left Cliveden to his second son, Samuel Chew II (1871-1919). Being still a student at Harvard, it fell to Sam II's widowed mother, Mary, to look after Cliveden. For many years Anne had considered her incapable of running the house, but towards the end of her life her views changed when it fell to Mary to stop the house being taken by an over-zealous Congressman who wished to claim it for the country.

To mark the 135th anniversary of the Battle of Germantown, a fancy-dress ball was held at the house and the guests included President William Howard Taft. But, Samuel II felt the house was too much for the family to maintain and suggested gifting it to an organization. This didn't happen, but the 60-acres of grounds known today as "Cliveden Park" were gifted by him to the City of Philadelphia in 1912.

Samuel II predeceased his mother in 1919 and willed the house to his nephew, Samuel Chew III (1915-1989). Being only a child, the management of Cliveden yet again fell back into the capable hands of Samuel II's mother, Mary. Following her death in 1927, she passed management of the estate to her daughter, Elizabeth Brown Chew (1863-1958).

"Bessie", as she was known, took the house into the new century: she opened it for periods to the public for tours and hosted the first re-enactment of the Battle of Germantown the year she moved in. She also updated the decor while not losing its original concept - any adjustments, no matter how small, were made in the Colonial-Revival style. On her death in 1958, her nephew Samuel III moved in and continued where she had left off, striving to maintain it both as a family home and an important piece of American history.

Cliveden as a House Museum Today

In 1966, Cliveden was designated a National Historic Landmark, part of the Colonial Germantown Historic District. But, Samuel III and and his relatives soon came to the realization that it could no longer serve two purposes and in 1972 the Chew family donated Cliveden, its remaining 6-acres of parkland, and its collection of artefacts to the National Trust for Historic Preservation. Today, Cliveden is a house museum offering tours from April through December. It is also available to hire as a venue and the Chew Family Papers are available for research use at the Historical Society of Pennsylvania.

Historic Architecture in Northwest Philadelphia: 1690 to 1930s By Joseph Minardi

Germantown: A Military History of the Battle for Philadelphia, October 4, 1777 By Michael C. Harris

Independence: A Guide to Historic Philadelphia By George W. Boudreau

Philadelphia Then and Now By Ed Mauger