Completed in 1742, for Dr William Stevenson (d.1739) and his wife, Francina Augustine Frisby (1719-1766). Ogle Hall has a rich history and is intimately linked to the Governors of Maryland: it was home to three, and home to the children of two more; and, during the latter half of the 18th century it was the Governor's official residence at Annapolis. It was also home to a co-founder of The Key School and his wife, a crime fiction writer. Today, it is named for Colonial Governor Samuel Ogle whose family lived between here and Belair Mansion for some fifty years. Since 1967, it has been the Alumni House of the U.S. Naval Academy and has become a popular venue....
zoom_in 1 images 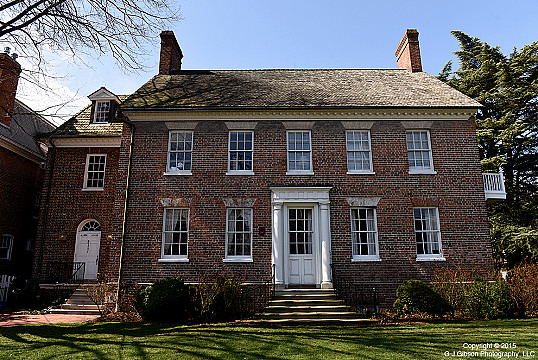 Benjamin Ogle, of Belair; Governor of the State of Maryland

A native of Lancaster in England, Stevenson was described as a "beloved doctor" but died in the year that work started on his new mansion - the first of its kind in Annapolis. His widow, Francina, oversaw its completion and then lived there with their children. In 1746, she remarried Daniel Cheston (1712-1754) and according to the custom of the day the property came into his possession. The following year, they leased it to Samuel Ogle (1694-1752), for whose family the house is named today.

In 1747, Ogle and his wife Ann Tasker (1723-1817) returned to America after seven years in England to take up his third term as Proprietary Governor of Maryland. They maintained the Hall as their official city residence during "the season" while spending their weekends and summers at their magnificent country home, Belair Mansion. Ogle was well-known for his love of horses and racing - notably at Belair - and he built his stables at Annapolis beside the front walk so that he could easily greet his horses as he left or returned home!
Samuel Ogle - who was 27-years older than his wife - died in 1752 and the following year his widow's brother, Benjamin Tasker Jr. - owner of the Baltimore Iron Works - purchased Ogle Hall from Cheston for 70-tons of pig iron. Rather than live there, he tended to Belair while his widowed sister and her children lived year-round at what was now his house in Annapolis. Eight years later (1760), Mrs Ogle bought the house and purchased a plot next door the following year, dividing the two properties by way of an 8-foot brick wall.

In 1773, Mrs Ogle transferred her Annapolis property - consisting of the main house, gardens, kitchens, and other dependencies - to her only son, Benjamin Ogle (1749-1809), who together with his second wife, Henrietta Hill, divided their time between the Hall and Belair. That same year, Presidential records show that Ogle held a dinner at the Hall for his friend, George Washington (1732-1799). Two years later (1775), Benjamin added the semi-octagonal ballroom wing, but as Revolution neared it took longer than planned before moving all their furniture by carriage down to Belair for safe-keeping.
In 1798, Ogle continued family tradition when he was appointed the 9th Governor of the State of Maryland. On his death, he left his Annapolis home to his widow who in turn left it to their eldest son, Benjamin Ogle II (1775-1844), with instructions that on her death he was to sell the property, then described as, "a commodious brick dwelling with offices, coach house, stable, ice-house, and garden with fruit trees".

Mrs Henrietta Ogle died in 1815 and her son obeyed his her wishes by selling their home in  Annapolis that year for $6,760 to James Steele (1760-1816), heir to a fortune derived from land and slaves, and the son of one of the wealthiest men in Dorchester County.

Steele died just one year after taking ownership but his widow, Mrs Mary (Nevitt) Steele, continued to live there until her death in 1836. Three years later, her children sold the house, its contents, livestock, and six slaves for $4,754 to their aunt - Mrs Steele's half-sister - Mrs Sarah (Lloyd) Lowndes, the wife (and first cousin) of Commodore Charles Lowndes (1798-1885), who were both distantly related to the Ogles. But, only five years later (1843), Sarah placed it back on the market when it was described as:

Containing ten rooms and many conveniences for the accommodations of a large family. A good Back Building which includes pantry, store rooms etc., a large and good kitchen and laundry adjoining with excellent accommodations for servants. A paved yard, with a pump of fine water, smoke house, ash house, coal house, stable and carriage house. A delightful Garden, well-stocked with an abundance of choice fruit now in full bearing, the House yard and Garden, including a half square, is divided from the next residence by a substantial brick wall 8 or 10 feet in height, and is well calculated to train grapes etc., on, as the house presents two fronts. It is surrounded by a large court yard, and is decidedly one of the most desirable residences in the City.

In 1865, the Pratts leased the house to Congressman John Thomson Mason, Jr. (1815-1873) and his wife, Margaret Augusta Cowan (1821-1899). Two years later, the Masons purchased the mansion from the Pratts for $5,000, when Ogle Hall became referred to as the "Mansion House". Mason died in 1873 and though his widow sold off some of the land she maintained the house until her death in 1899 when she bequeathed it to her two surviving daughters, Louise Gilmer Mason (1844-1921) and Elizabeth Mason (b.1848). The following year, the property was conveyed to Elizabeth after she paid her sister $1,475.

The Browns made several alterations before selling it in 1967 to the United States Naval Academy who maintain it today as their Alumni Association House. It is also available to hire as a weddings and events venue.

Annapolis, City on the Severn: A History By Jane W. McWilliams

The Woman in Black: A Classic Mystery By Zenith Brown writing as Leslie Ford

Heroes Of Annapolis: The True Stories of Fourteen Graduates of the U.S. Naval Academy, from the Civil War to the War on Terror By David Poyer