Completed in 1902, for Boni de Castellane (1867-1932) and yet entirely funded by his American wife, Anna Gould (1875-1961). Standing on 2.5-acres at the corner of Avenues Foch and Malakoff, it was designed by the celebrated Ernest Sanson in collaboration with René Sergent (1865-1927), a specialist in the style of Louis XVI. Built with pink marble, it was constructed in the style of - if double the height of - the Grand Trianon at Versailles. It was one of the last of the great French Neo-Classical mansions of its era. It was occupied by the Nazis during World War II and was demolished in 1969....
zoom_in 1 images 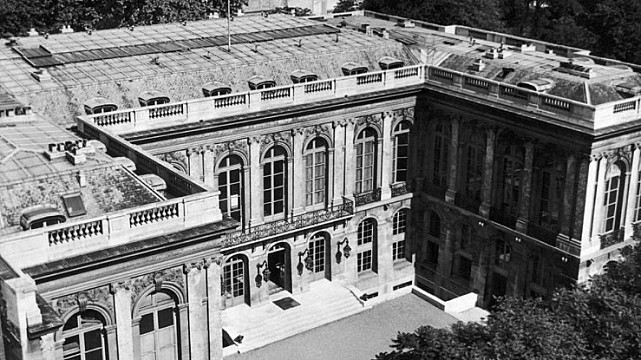 Boni de Castellane was an impoverished aristocrat, brimming with self-importance and with expensive tastes few could live up to. He left Paris for New York with just one thing in mind: to bag himself an heiress; and, though Anna Gould was certainly not the prettiest, that was of little consequence, by marrying her he hit the jackpot. Her dowry was a lump sum of $15 million wrapped up in a trust fund that gave her an annual income of $500,000. But, having no concept of the word "trust" in any of its connotations, Boni was a little dismayed when he learned that the $15 million nor even its residue was his. So, he determined that by whisking Anna back to Paris - away from the deservingly suspicious eyes of her family and friends - he could use that effete charm that had worked on her (if only her) to ensure that she spent her money the he wanted.

Before we start feeling too sorry for Anna, she did fall in love with the affected, effeminate man who'd made no secret of why he was in New York; and, of course, her millions came from her father, Jay Gould, the ultimate "Robber Baron" whose skulduggery had caused financial ruin and hardship to countless ordinary - and not-so ordinary - Americans. Natalie Clifford Barney warmed to neither Boni nor Anna: "she is the most unwashed and dirty-looking creature I ever laid eyes on, and he the most insipid. Quel ménage!"

In just their first year of marriage alone, Boni succeeded in working on his wife's vanity to rent them a mansion that had belonged to Queen Marie-Antoinette before purchasing two chateaux and a yacht and then rounding out the year by hosting a party for which they hired the entire Bois de Boulogne - think Central Park, just twice the size! But none of that was enough for Boni, and he now had the audacity to complain that he was "hard-up"! So, the over-entitled title-holder unleashed a pack of rabid lawyers onto his wife's trust fund. They were successful, and like his beloved pug "Bouboulle" in a butcher's shop, Boni now embarked on an 11-year frenzy that saw him devour $10 million of his wife's capital (not to mention the residue) from her once seemingly unassailable fortune.

Nowhere was Boni's spending more conspicuous than at the Palais Rose. Having purchased 2.5-acres on the corner of the uber-fashionable Avenues Foch and Malakoff, for a cool 3.6-million Francs, Boni employed France's pre-eminent Neo-Classical architect, Ernest-Paul Sanson (known in America for the Perry Belmont House and Carolands), to build him a pink marble embellishment of the Grand Trianon at Versailles. Sanson collaborated with René Sergent, and in order to establish its authenticity they built it with marble mined from the same quarries that Louis XIV had used to construct Versailles.

Boni, who despite all his faults did have an exceptional eye for quality, then set about collecting a spectacular array of furnishings and art: His purchases included Gobelin tapestries, a 13th century carpet from Lisbon Cathedral, reams of artwork by the Old Masters, a clock gifted to the Pope from King Louis XIV etc., etc. He later admitted: “I was driven by passion as strong as that of some players for cards... (decorating the Palais Rose was) my slide into the abyss”.

Trianon and the Queen's Hamlet at Versailles By Jacques Moulin

Everybody Was So Young: Gerald and Sara Murphy: A Lost Generation Love Story By Amanda Vaill

Sylvia Beach and the Lost Generation: A History of Literary Paris in the Twenties and Thirties By Noel Riley Fitch