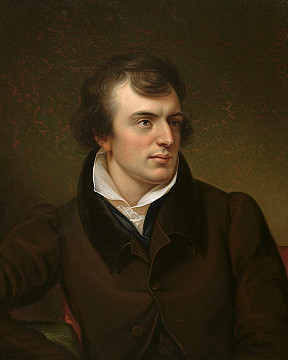 He was born at Boston and showed an aptitude for sculpting from an early age. He was educated at Phillips Academy, Andover, before entering Harvard in 1821 where he devoted his time to reading ancient literature, studying works of art and learning French and Italian, all the while continuing to sculpt and encouraged to do so by his friend Washington Allston. Before graduating, he sailed to Rome to study art, living on the Via Gregoriana where he met the painter Robert W. Weir. They became firm friends and studied works from the Renaissance period together, notably the Laocoon group of the Vatican structure galleries and the Apollo Belvedere.

In Rome, he began sculpting a number of busts before returning to Boston in 1827 where he was commissioned to complete busts of Josiah Quincy, President of Harvard; Samuel Appleton; and, John Jacob Astor. He also completed a portrait of President John Quincy Adams. Returning to Italy in 1828, he established a studio in Florence where he remained for most of his professional life. His sculptures reflected truth and reality, but also ancient classical aesthetic ideals learned from Washington Allston. His most famous works are: The Rescue (1837-1850) and his over-life-size George Washington (1840) both commissioned by the U.S. government. His other famous works include James Fenimore Cooper (1831), Castor and Pollux (1847), and the Marquis de Lafayette (1831-32).

In 1828, he was elected into the National Academy of Design as an Honorary Academician. He was elected a Fellow of the American Academy of Arts & Sciences in 1843 and his sketchbook is kept at the Archives of American Art. His works are on display in the Art Institute of Chicago; the Metropolitan Museum of Art; the Boston Museum of Fine Arts; and, the Smithsonian American Art Museum. In 1837, he married Louisa Gore, grand-niece of Christopher Gore of Gore Place at Waltham, Mass. They had three children.

Horatio Greenough and the Form Majestic: The Biography of the Nation's First Washington Monument By Harry Rand