Built in 1902, for Lt.-Colonel Abram Piatt Andrew (1873-1936). Red Roof was one of the original cottages put up at Eastern Point, an enclave popular with Boston's Bohemian set. Its elaborate decoration was unique and served as the inspiration for Beauport. Until 2011, it was retained by the descendants of his sibling, but the house had fallen into disrepair and after being sold it was demolished in 2012 to make way for a new home, retaining as much of the original as possible. It remains a private residence....
zoom_in 3 images 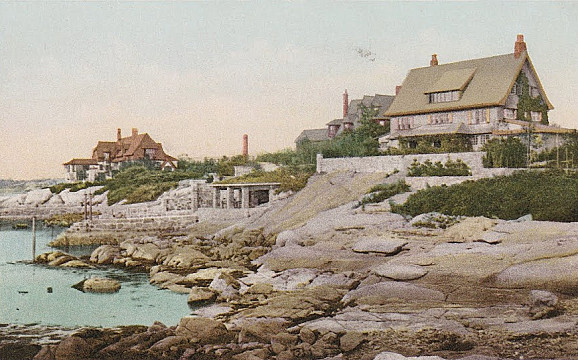 A. Piatt Andrew, known as APA, was one of the first Americans to take an active part in World War One, founding the American Field Service. On one hand, he was a highly respected Professor of Economics at Harvard University, representing Massachusetts as a member of the U.S. House of Representatives: on the other, he was a party-loving eccentric who entertained many of America's leading intellectual lights of the day.

Among many others, visitors to his summer house included philosopher William James (1842-1910); portraitists John Singer Sargent (1856-1925) and Cecilia Beaux (1855-1942); and patron of the arts Isabella Stewart Gardner, the widow of John Lowell Gardner II (1837-1898), who stayed her frequently while APA was in Europe.

In 1901, APA purchased just under an acre of land on Eastern Point overlooking Gloucester Harbor for $2,500. By the following year, his home was for the most part complete. He named it for its distinctive "Red Roof" and it contained five color-themed bedrooms though it was best remembered for its secret passages and rooms, most notably the hidden bar that was disguised as part of the library where he and his guests would flaunt Prohibition and revel in "Bacchanalian" parties! A frequent guest was APA's close friend, Henry Davis Sleeper (1878-1934), who was so captivated by the place that he built the magical Beauport a year after visiting. Sleeper also greatly added to Red Roof's distinctive style, through its exotic fireplaces, art and paraphernalia.

APA frequently brought students up from Harvard to his weekend retreat, that on one occasion included future President Franklin Delano Roosevelt (1882-1945). Dinner parties were held in the Tudor music hall that was known as the Garden Room. They were often themes and costumed guests performed skits or musical acts. Though popular with the ladies at Eastern Point, APA preferred male company, as related by Louise Hall Tharp,

A. Piatt Andrew had an organ installed in the passage between the living room and a recently added study. Here, Isabella sat on the couch (with a bearskin and two leopard skins on it) to listen to his music. She was probably unaware of a hidden space above the books - too low to stand up in but equipped with mattress and covers where some of Andrew's guests could listen in still greater comfort. She had seen the Brittany bed in the living room but that there was a small hole over it, perhaps no one had told her. The sound of organ music could be heard the better through the hole - and was it just a coincidence that a person in the hidden alcove above could look down through it? Gossip had it that often all the guests were men, their pastimes peculiar.

Separated from Eastern Point Boulevard by eight-foot stucco walls and set amid woods, an old mill-stone served as a table on the front lawn of the house near to the entrance door with its small ship's bell and lantern. Three terraces lay between the house and the sea, and each was themed: Italian, Opera and Mexican. The path wound down through these terraces via a number of gates and entrances, before reaching a salt water swimming pool among the rocks, overlooking the ocean. Joseph Garland said the house,

Catalyzed (a colony) that would spring up around this brilliant, creative, handsome man... His grace, his intellect, his sensitivity, his overpowering ego and his mesmeric charm captivated men and women alike and drew from those admitted behind the gate of his urbanity an often passionate devotion.

After Andrew's death in 1936, Red Roof passed to one of his siblings and although exact ownership from then is unclear, it remained in their family until 2011 when they were no longer able to afford its upkeep. According to the Gloucester Times Red Roof was sold by APA's great-grandniece, Corinna, and her husband Roger Fisk (as well as others of her family), for $1.6 million. The new owners are Joseph P. Hadley and his wife, Anne Marie Reilly, of Greenwich, Connecticut. As the most part of the house had fallen to ruin, in 2012 the Hadleys made the difficult decision to demolish it to make way for a new one, built in the same shingle style with, of course, a distinctive red roof.

Gloucester on the Wind: America's Greatest Fishing Port in the Days of Sail By Joseph E. Garland

Steamboats of Gloucester and the North Shore By John Lester Sutherland 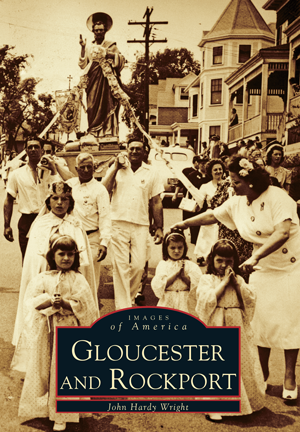