Built in 1907, for Harry Davis Sleeper (1878-1934). Also known as the Sleeper-McCann House, it was inspired by the Arts & Craft Movement in England and was an inspiration for Winterthur. Its been described as a, "magical architectural collage" worthy of any Harry Potter film set. Beautifully situated overlooking the water and singularly unique in style, Beauport was the product of an extraordinarily creative mind and it remains almost entirely as Sleeper left it. Donated to Historic New England in 1942, it is one of the North Shore's most popular tourist attractions. Magazine Antiques called Beauport, "one of the most widely published houses of the 20th century"....
zoom_in 15 images 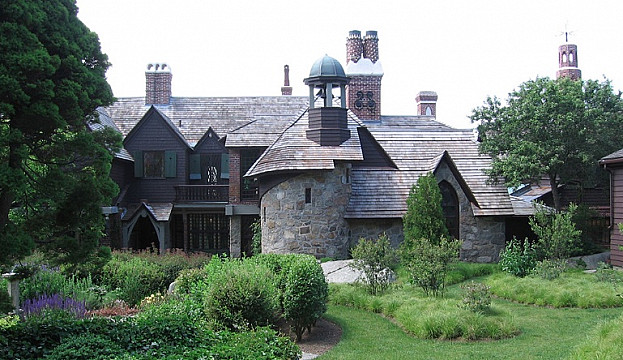 Harry Sleeper was a nationally renowned interior decorator, art collector, and antiquarian, who among others was sought after by Henry Francis du Pont (1880-1969) to advise on the interiors of both Chestertown House and Winterthur. He was first introduced to Gloucester's Eastern Point in 1906 while staying at Red Roof. By the early 1900s, this small enclave had become popular with a set of artists and intellectuals from Boston, notably Isabella Stewart and her husband John Lowell Gardner II. In 1907, so enchanted was he by the area, Sleeper bought a plot of land and started work on his new home.

By the following year, the house was habitable but Sleeper continually adapted and added to it up until 1928 when it finally came to rest at 40-rooms. He named his new home "Beauport" as it overlooked Gloucester Harbor which was originally named "Le Beau Port" ("the beautiful port") when it was first mapped by Samuel de Champlain (1574-1635).

As someone who would become one of the country's most respected interior designers, it is impossible to consider that Harry Sleeper's home might have been in any way ordinary. His first move had been to incorporate the 18th century interior of a dilapidated mansion in Essex County (a former home of the Cogswell family) into the shell of Beauport. As the scope of his interests - historical, artistic and architectural - broadened, so did his house. Over time, it grew from 26 to 40 rooms in order to accommodate his varied and eclectic tastes in American, European and Asian art and antiques.

The gradual growth of the house is reflected in its Harry Potter-esque nature, with secret staircases, a belfry tower, spire, Tudor chimneys, an uneven roofline, winding paths, and rooms of varying sizes such as the Octagon Room and most notably the China Trade Room with its dizzyingly high 25-foot ceiling that sloped up to resemble the inside of a pagoda. The hand-painted Chinese wallpaper in this latter room was originally commissioned for Robert Morris (1734-1806) at his mansion in Philadelphia - at a time when only a handful of the wealthiest families in America could have afforded such an exquisite rarity. The discovery of this wallpaper prompted Sleeper to create the room that was inspired by his own personal interest in America's early trade with China:

You see... These boys used to set out from Salem round the Horn, pick up otter skins in the Northwest, sail to Honolulu for sandalwood, then on to China to trade their cargoes for silk and tea and spices... Out in Hong Kong & Shanghai and Foochow they'd pick up gifts for their best girls at home. That's how Chestnut Street in Salem became, for a time, almost an Oriental museum. Things like that get sold and dispersed. I've been picking them up here and there for years. I just thought we ought to have a room to recollect that brave period.

Sleeper died unexpectedly in 1934 and having made no provisions in his will as to the fate of Beauport, the house passed to his elder brother, Stephen Westcott Sleeper (1874-1956). Unable to afford its upkeep, his brother put the house on the market in 1935. Historic New England was unable to raise the money and it was beginning to look as though it would go to the highest bidder and Harry's collection would be divided up. But, thankfully, at that time, a couple from Long Island who happened to be keen collectors themselves spotted Beauport from their yacht in the harbor and purchased it that year.

The new owners were Helena Woolworth (1878-1938) and her husband Charles McCann (1877-1941) who lived at Sunken Orchard in New York. Mrs McCann was a co-heiress to the Woolworth fortune and when she first set eyes on Beauport's interior she immediately recognized, "this house and collection must be preserved". The only room she wished to change was the China Trade Room and she wrote to the previously mentioned Henry Francis du Pont (1880-1969) to seek his advice, to which he replied:

I have just learned that you bought Harry Sleeper's house after all, and I am delighted to know that it has become the property of a person of your taste and discrimination. Naturally, the minute you take the things out of this house, or change them about, the value of the collection does not exist.. I have no feeling whatsoever about the Chinese room, as I think it is distinctly bad; but the rest of the house really is a succession of fascinating pictures and color schemes.

Helena retained the wallpaper in the China Trade Room but filled it with her own English mahogany Chinese Chippendale furniture (upholstered in yellow damask) and her extensive collection of Chinese porcelain - all lit by a vast Waterford crystal chandelier. On completion, the room strongly resembled the Chinese Parlor at Winterthur.
Beauport Today

Mr McCann died three years after his wife in 1941. They left Beauport to their children (Frasier and Constance) who donated the property and all its contents to Historic New England the following year. Open to the public since 1947, today the gatehouse has become a visitors center; the toolshed converted into rest rooms; and, the garage office space. But, apart from this and Mrs McCann's alteration to the China Trade Room, Beauport remains just as Harry Sleeper left it. Today, it is rightly a hugely popular tourist attraction and in 2003 it was created a National Historic Landmark.

Gloucester on the Wind: America's Greatest Fishing Port in the Days of Sail By Joseph E. Garland

The Last Fish Tale: The Fate of the Atlantic and Survival in Gloucester, America's Oldest Fishing Port and Most Original Town By Mark Kurlansky

William Morris and his Palace of Art: Architecture, Interiors and Design at Red House By Tessa Wild

The City of Blue and White: Chinese Porcelain and the Early Modern World By Anne Gerritsen