Completed in 1738, for Colonel John Carter (1696-1742) and his wife, Elizabeth Hill (1708-1771), heiress to the plantation. The farm established here in 1638 by the Hill family is now the oldest family business in America and Shirley is the oldest continually inhabited plantation in English America. It is presently home to the 11th generation of the Hill-Carter family. The mansion itself was the third manor built here and possesses possibly the only original Queen Anne forecourt surviving in America and the fabulous ‘free-standing’ walnut staircase is the only one if its kind in the country....
zoom_in 7 images 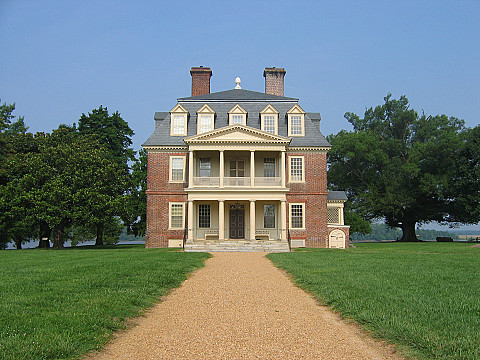 The Shirley Plantation was first settled in 1613 by Thomas West (1577-1618), 3rd Baron de la Warr. In his capacity as the 1st Governor of Virginia, he received a grant of 8,000 acres from King James I. He named the land "West and Shirley Hundred" for himself and his wife, Lady Cicely Shirley (1581-1662). The land was on the north side of the James River, roughly 25 miles equidistant between Jamestown and Richmond in what was then known as the ‘New Bermudas’ near to the mouth of the Appomattox River.

Lord de la Warr (for whom the state of Delaware, as his name was pronounced, took its name) started extensive tobacco cultivation on Shirley Hundred to supply both England and her colonies. Following his death, the land was divided up and by 1624 ‘West and Shirley Hundred’ had been divided into several plantations spread through the now separate ‘West Hundred’ and 'Shirley Hundred'. The three brothers, children and grandchildren of Lord de La Warr all received land and settled within Shirley Hundred. One of his brothers, Lt.-Colonel Nathaniel West (1592-1624), was killed here by Indians while leading the militia that was raised after the Indian Massacre of 1622.

In 1638, a plot of 450-acres within Shirley Hundred was acquired by an Englishman, Edward Hill I (1610-1663), from the Virginia Company of London. He was resident here from 1651, building "Hill House" on the banks of the James River sometime that decade, near to the present mansion. In 1660, he acquired a further 2,476-acres of adjoining land and when he died three years later the plantation passed to his son, Edward Hill II, whose tenure of ownership was notable for his involvement in the Rebellion of Nathaniel Bacon in 1676. Having sided with Governor Sir William Berkeley (1605-1677), Hill’s home and estate were plundered, and he and his family were held captive by Bacon’s rebels.

The Hill-Carters & the Second Hill House

In 1700, the plantation passed to Edward II's son, Edward Hill III, who supplemented tobacco production with wheat, corn, and lumber that he traded for salt and wine in Madeira and London. He replaced the original Hill House in about 1700 with a ‘stately three-story’ mansion also named "Hill House" that measured sixty by twenty-four feet. On the eve of the American Revolutionary War in 1773, this house was described as:

"Large, convenient, and expensive, but now falling to decay... the present proprietor has a most opulent fortune, and possesses such a variety of seats, in situations so exceedingly delightful, that he overlooks this sweet one of Shirley, and suffers it to fall to ruin, although the buildings must have cost an immense sum in constructing; and, would certainly be expensive to keep in repair". In 1868, it was finally demolished and its bricks were later incorporated into Upper Shirley a mile-and-a-half to the north.

"The Great House" at Shirley Plantation

In 1723, Edward Hill III's eldest daughter and - having no male issue - principal heir, Elizabeth Hill married the, "handsome, London-trained lawyer" John Carter, eldest son of Robert 'King' Carter (1663-1732), "the richest man in Colonial America". As a wedding present her father-in-law paid for the construction of the three-story house we see today - adjacent to the second Hill House - which they referred to as the "Great House" and was completed in 1738. It is built with red brick and white trim boards on a square foundation. Unusually, it has no actual front door as both the riverside and courtyard entrances are fronted by matching porticos. On the roof, the house is crowned by a pineapple, and the pineapple is also used frequently throughout the house being the old colonial symbol for hospitality - and the Hill-Carters did not hold back when it came to entertaining guests!

The house is surrounded by several outbuildings including a two-story kitchen with servant's quarters; a two-story laundry with servant's quarters; a smokehouse; a stable building; an ice house; a large storehouse; and, a dovecote. These buildings all frame the central house lending to its majesty and creating a Queen Anne forecourt - possibly the only one in America that survives in that style from this period.

About two years before her death, Mrs Hill-Carter gave Shirley over to her second son, Charles Hill Carter (1732-1806). As the father of 23-children by two wives, perhaps understandably, he enlarged and renovated both the house and several outbuildings. Charles had always felt a loyalty to England, but on the outbreak of Revolution he became an officer with the American militia and during the war his home served as a supply center for the Continental Army. When it found itself between the British lines at Hopewell and the American lines under the Marquis de Lafayette at Malvern Hill, Shirley became a reconnaissance point for both sides.

Life at Shirley Between the Wars

After peace was declared, despite the changes brought about by American independence, the plantation continued to prosper. Towards the end of the century, Charles added many elegant furnishings to Shirley including a large collection of engraved English silver and a set of Dining Room chairs all emblazoned with the Carter family crest – a dog’s head.

In the early 1800s, the heir apparent to Shirley was now Charles’ son by his second marriage, Dr Robert Hill Carter. After the death of Robert’s wife, Mary Nelson (daughter of U.S. Founding Father Thomas Nelson, 4th Governor of Virginia) he left his four young children with his parents at Shirley and went to Paris to continue his medical education. But, he died just the following year (1805) and Charles now named Robert’s eldest son, Hill Carter (1796-1870), to succeed him at Shirley when he came of age.

Prior to his coming of age in 1816 Shirley was managed by Hill’s uncles, but they had not done a good job. As soon as Hill took control, he set about restoring the plantation to its former glory. He experimented with new crops and motivated his 130-slaves through encouragement, replacing worn out equipment and introducing new farming methods.
General Robert E. Lee and the Civil War

On the outbreak of Civil War, the Carters sided with the Confederates. Hill Carter was a first cousin through his aunt, Mrs Anne Hill (Carter) Lee, of the Commander-in-Chief of the Confederate Army, General Robert E. Lee (1807-1870), who had spent his first years at the Lee’s nearby ancestral home, Stratford Hall, as well as receiving some of his early schooling in the converted laundry house at the Shirley Plantation.

The Civil War found Shirley encircled in the thick of battle as the Union armies fought desperately to take control of the Confederate capital at nearby Richmond. Following the Battle of Malvern, Shirley served as an impromptu field hospital for several thousand wounded Union soldiers. Despite their political differences, the Carters provided soup, bread, water, and cloth for bandages. Union General George B. McLellan expressed deep gratitude for the family’s help and provided them with safe-conduct passes and other courtesies.

A Modern Mindset and a Female Force

In 1866, four years before his death, Hill passed Shirley to his son, Robert Randolph Carter (1825-1888), a former Confederate blockade runner, who was now faced with the challenge of running the plantation without slave labor. Possessing a similar mindset to his father, he successfully invested in mechanical machinery and introduced the latest farming methods which increased yields while demanding less physical labor.

Robert had no sons, but his widowed daughter, Mrs Alice Bransford (1852-1926), had long taken an interest in running Shirley and after he died it became hers. She took a hands-on approach to management and became involved with every aspect of the plantation, now matter how menial, thus earning herself the reputation as the most proficient farmer on the James River. In 1917, she passed the management of the plantation to her first cousin, Charles Hill Carter I (1868-1962), of High Hill, across the road from Shirley, and four years later (1921) she was joined in the house by her sister, Marion, and Marion's husband, Admiral James Harrison Oliver, 1st U.S. Governor of the Virgin Islands.

In 1929, three years after Alice died, Charles and his family moved into Shirley to help the recently widowed Marion. Before Marion died in 1953, in accordance with her father’s will, she chose a descendant of her grandfather to continue to the Shirley Plantation. She chose Charles’ son, Charles Hill Carter II and today the plantation is in the capable hands of his son, Charles Hill Carter III (b.1962), and his extended family.

The mansion is still found almost exactly in its original state, displaying superb examples of 18th century panelling and elegant wood-carving throughout. The famous carved walnut staircase that rises three stories without any visible form of support is the only one of its kind in America. The house was placed on the National Register in 1969 and the following year it was recognized as a National Historic Landmark. Today, the still-operational 300-acre plantation attracts some 50,000 visitors a year and its upper floors are still home to the 11th generation of the Hill-Carter family.

Plantation Homes of the James River By Bruce Roberts

The First Emancipator: Slavery, Religion, and the Quiet Revolution of Robert Carter By Robert Levy

Masque of Honor: A Historical Novel of the American South By Sharon Virts

American Colonies: The Settling of North America By Alan Taylor

Tales from a Revolution: Bacon's Rebellion and the Transformation of Early America By James D. Rice

The Keepers of the House By Shirley Ann Grau